The Legality of Chess in Islam 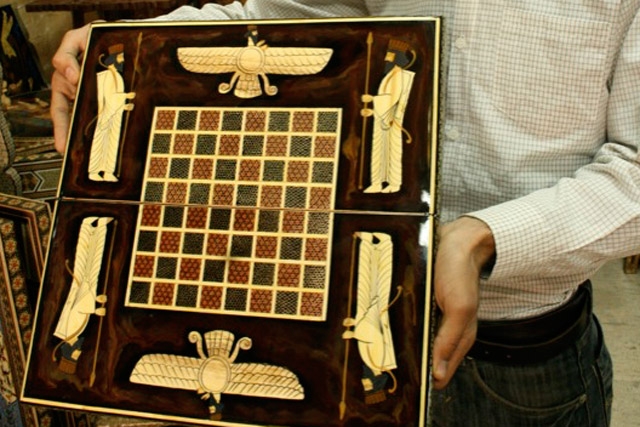 And you thought chess was merely a game. This essay explores chess—its legal status, morality issues surrounding it, status as art and science, and ultimately its perseverance—over two thousand years the history in Iran and Persia.

Chess was banned in Iran after the 1979 Islamic Revolution. Said to encourage gambling, the public play of chess was pronounced haraam, a reprehensible activity encouraging gambling, excess, warmongering, and inattention to the five ritual prayers. Committed chess players were forced to go underground to nurture their unshakable bond with the ancient game, said by experts to have originated in Iran two thousand years before the 1979 Revolution. The chess ban did little to discourage clandestine play, and it was not long before the Ayatollah Khomeini issued a new religious edict (fatwa) making chess permissible, even admitting to the game's many virtues if played in moderation and without stakes. Love and devotion for the game led to the creation of dozens of chess parks, chess palaces, a national chess federation and a new generation of chess players, including some international youth champions.

Still, the debate on the legality of chess was not quite resolved. In 2000, one of the city of Kashan's elderly clergymen attempted to re-issue a religious decree against the game and enjoined others to join him in the public burning of chessboards. Although his pronouncement had no legal value, it did move local devotees to renewed debate and discussion. Ali Hachemi Tehrani, head of the chess association in Kashan, wrote to Iran's top clerics, newspapers and scholars to bolster a case in praise of the game. As Tehrani stated, "I respect the learned clergyman but he's referring to a chess that isn't played in our district. Chess has a very old history. Fourteen-hundred years ago, when Islam took root in Iran, there was a kind of chess played with dice. The only thing ruling the progress of pieces on the chessboard was luck. It had nothing to do with strategy and creativity; therefore, the Holy Prophet saw no benefit in the game-he considered it gambling. But when dices were removed, chess became a science and an art." [1]

While it is true that chess has been regarded as both art and science in many Islamic cultures over the ages, Tehrani's comment is not entirely historically accurate. Indeed, the recent controversies and confusion in Iran surrounding the sport of chess seem to mirror the profuse but ultimately inconclusive debates over the game's legal status in early Islamic history. According to HJR Murray, "most probably the Prophet had never heard of the existence of chess, since the Muhammadan jurists have been unable to settle the question of the legality of chess-playing by any direct decision of Muhammad as recorded in the Qur'an, or in authentic tradition. (HJR Murray 187.)" It is difficult to state with any great certainty that chess was played in Arabia during the Prophet's lifetime; chess was after all an Indo-Iranian invention, and it is not unreasonable to assume that it entered Arabian culture through the conquest of Egypt and Western Asia after the Prophet's death. However, it is clear that chess had gained tremendous popularity amongst all classes and social spheres by the time of the Abbasid Caliphate, which took power in the year 750, still very early in Islamic history. It was at this time that religious scholars began to question the legality of playing chess.

After the Prophet's death, great pains were taken to establish an accurate body of the Prophet's sayings (hadith) in order to set a precise code of conduct for the community of believers (ummah.) Muslim jurists and scholars emerged, attempting to establish Muhammad's attitude towards all social practices and mores, including his views on recreation. Scholars also turned to the Qur'an and began to generate schools of commentary and rules of practice. Due to chess' widespread vogue, particular attention was paid to the issue of the legality of chess play.

The jurists' main problem in making a conclusive decision on chess was two-fold. First, the end of the second Islamic century saw a proliferation of vying hadith traditions. Even after a science of hadith-testing (isnah) had been established, it remained difficult to surmise which accounts were accurate. Second, the Prophet did not seem to make any specific pronouncements on chess. At best, jurists were able to locate strands that emphasized the Prophet's hatred of games of chance in general.

Jurists would also find that chess is not mentioned by name anywhere in the Qur'an itself. As the tradition of Islamic legal jurisprudence continued to evolve, scholars were hard pressed to locate Qur'anic verses (ayas) that would shed light on the status of gaming. Sura V. 92 became frequently cited:

O true believers, surely wine and lots (maisir) and images (ansab) and divining-arrows ('azlam) are an abomination of the works of Satan, therefore avoid ye them that ye may prosper.

If one construes maisir as inclusive of every game which involves an element of chance or of lots, then chess (especially played with dice) could be said to fall into the category of forbidden activity. However, even this explanation would not suffice, and the Qur'anic verse and ensuing commentary yielded a number of differing perspectives:

It is on this verse that the prohibition of nard (tables, backgammon), and the later-discovered games of cards is based. There is, however, a tradition which is preserved by al-Baihaqi (D.458/1066) that the caliph 'Ali once described chess as the Persian maisir, though the genuineness of the tradition is disputed by other writers-b.Sukaikir, for instance. The noted Hanbalite b. Taimiya (D.728/1328) makes the sensible distinction that in chess it is only the playing for money that is maisir, and quotes the opinion of Malik b. Anas that the stake made chess a far worse game than nard. The Sunnite Muslim sees a prohibition of carved chess-pieces which actually reproduce the King, Elephants, Horses&c., in the prohibition of images. Persian commentators, however, have explained the term as referring to idols, and the Shi'ite and Moghul chess-players have no objection to using real carved chessmen. The Sunnite player, on the contrary, will only use pieces of a conventional type in which it is impossible to see any resemblance to any living creature. [2]

It is evident that the Qur'anic verse did not clear up the confusion surrounding chess' legality, and in fact opened up the forum to further debate on the legality of gambling, graven images, and other forms of recreation. As for chess specifically, the game's status seemed to vary in differing cultures and legal discourses.

Eventually, four major schools of jurisprudence evolved in Sunni Islam: Shafi'i, Hanafi, Maliki and Hanbali, named for their respective founders. Each of these schools differed on the status of chess. Abu Hanifa, whose school of law was observed by the Abbasid court, argued that chess was not forbidden (haraam), but only disapproved (makruh); he appeared to countenance public displays of chess play. Meanwhile, Malik and Hanbal had less forgiving views.

According to one of Malik's pupils, "I heard Malik say that there was nothing good about chess. He pronounced it haraam. I heard him denounce chess-playing and other vanities as haraam, quoting Sura X 33, 'When the truth has been scorned, what is left except error' (Murray 189)." Meanwhile, Hanbal agreed that chess was sinful, but qualified the statement by insisting that backgammon was even worse.

Ash-Shafi'i would deviate from the other major schools by speaking in favor of the legality of chess. He argued that chess, as a symbol of war, could be played as a legitimate exercise in sound military tactical training—without fear of illegality—provided that:

Ash-Shafi'i was not alone in his public endorsement for the propriety of playing chess while living in piety. The venerated Hussain, son of the caliph 'Ali, is said to have taught his children the game, and to have watched others at play while offering advice. A number of the Prophet's Companions, or revered inner circle, are associated with chess play, which appears to have been viewed as a legitimate and even enriching activity. There is also reason to believe that a tradition of blindfolded chess-play developed, indicating that a high level of playing skill and sophistication was cultivated and admired.

One of the most renowned blindfolded chess-players was Sa'id Ibn Jubayr. A renowned hadith scholar, Jubayr was reluctant to take up a post as judge (qadi) under Al-Hajjaj, who was one of the Ummayad Caliphate 's most noteworthy (and severe) administrative rulers (late 600s and early 700s.) Jubayr feared that working for such a prominent, powerful figure would impair his own piety. Furthermore, the Ummayad Caliphate's brutally violent method of rule was becoming known as un-Islamic amongst large numbers of the disaffected. In order to disqualify himself from legal work for the Ummayads (who still professed themselves to be Muslim), Jubayr took up chess. Apparently, chess's very illegality made it the perfect escape from a life of even greater ostentation and sin. In this way, the act of playing chess was actually lifted to a level of religious devotion. Jubayr's decision to adopt chess became widely recognized and admired, especially after he was put to death by the same al-Hajjaj who had previously wanted to hire him. As the popular legend has it, al-Hajjaj is said to have dreamed that "God would kill him once for every man he had killed in his ruthless career, but seventy times for the death of Sa'id ibn Jubayr (Murray 190)."

Ibn Jubayr's tale is noteworthy for demonstrating that there was no single normative view of how Islam was to be exercised. Ibn Jubayr's decision to play chess technically meant that he was flouting three of the four major schools of Sunni legal jurisprudence. Yet Jubayr's adoption of chess became a powerful testament to the virtue of resisting corrupt dynastic power. Chess may not always be legal, but sometimes it's the only right thing to do.