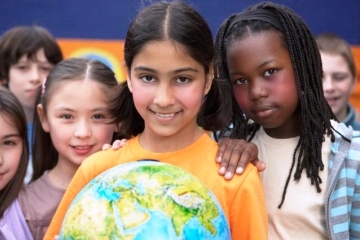 Originally published by the Des Moines Register, May 29, 2010

As Congress and the Obama administration begin debating the future of the Elementary and Secondary Education Act—better known as No Child Left Behind—there is a growing consensus in favor of raising standards and increasing accountability for results.

These reforms will help ensure our children receive the world-class education they need to compete in the 21st century. Yet for a truly world-class education, we also must have schools that teach students to actually know something about the world—its cultures, customs, languages, and traditions.

In other words, we must produce students who are globally competent. They must have a deep knowledge of other countries, mastery of multiple languages, and the skills to interact effectively with individuals from cultures very different from their own.

Unfortunately, global competency is an area where American classrooms are falling short. Consider a class of children entering kindergarten in the United States next fall. While their classes may include students from around the world, global issues and cultures will not be regularly woven into their course work. They will probably study only one language—English—until high school, even though they would learn a second language far more easily if they began in elementary school.

Now consider what the world will look like when those children enter the work force. China will likely be the world's largest economy. The largest cities will all be outside the United States.

Even the smallest businesses will have global dimensions, with the best jobs going to those who know how to compete, collaborate, and communicate with the rest of the world.

These changes are already taking place. According to the US Department of Commerce, one in five US jobs today is tied to international trade—a proportion that will only continue to increase in the years ahead. American companies are finding their greatest opportunities for growth in other countries, particularly in Asia.

The Obama administration understands the extraordinary opportunities that these new markets present. It recently announced a National Export Initiative to double American exports over the next five years. If the United States is serious about increasing exports in the long run, however, our work force will require a pipeline of talent ready to work in global, trade-focused settings.

The question before policy makers today: How can schools better prepare today's kindergartners to become tomorrow's globally-savvy workers? Across the country, local and national organizations are working with schools to address this challenge. For example, Asia Society's Partnership for Global Learning has advanced a series of initiatives to support globally-focused learning in K-12 education, including a network of internationally-themed schools. These programs have strengthened Chinese language instruction, developed online curriculum resources to promote global competence and helped raise achievement for traditionally underserved students.

But the responsibility to ensure all our students have the global education they will need to succeed does not rest only with educators. It also requires active engagement by parents, community members, corporate leaders, and policy makers. As the main driver of education reform at the federal level, the Elementary and Secondary Education Act can be the pivotal lever to ensure that every US student is prepared to become an active and effective member of the globally competitive work force that we so urgently need. In addition to raising standards and increasing accountability for results, the law's reauthorization presents an unprecedented opportunity to:

- Benchmark our education system and standards against other countries.

- Encourage and prepare educators to teach the international dimensions of their subjects.

- Build national capacity in world languages from preschool through college.

- Expand federal programs that give US students and teachers the opportunity to engage with the rest of the world.

In the months ahead, Congress and the Obama administration will have a unique opportunity to begin embedding these concepts into American classrooms, so we can prepare our children to compete and succeed in the global economy of the future. It is an opportunity that we cannot afford to pass up. It is time to put the world into world-class education.

Harold McGraw III is Chairman, President and CEO, The McGraw-Hill Companies; Vice Chairman and a Trustee of Asia Society; and a signatory of the CEO Statement on Global Competence.