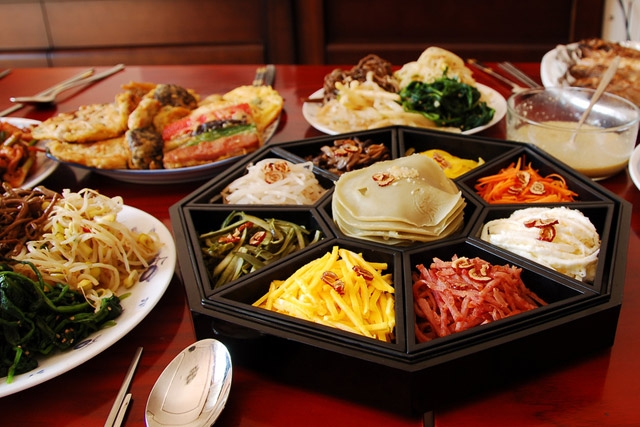 Chusok, Korea’s annual thanksgiving holiday, is one of the biggest migration events in modern Korea. Over half of the population visits families and ancestral graves during the three-day holiday, which usually falls sometime in September or October.

Families living in big cities like Seoul make a massive exodus by car, express bus, train, airplane, and ferry. There are long lines of cars leaving Seoul on the days preceding Chusok, causing massive traffic jams on the freeways and major rural routes. This year a trip by car from Seoul to Busan, which usually takes about five hours, was reported as taking as long as 20 hours!

Festive occasions, such as Chusok, demonstrate the importance of family to Korean society. Family members, usually from the paternal line, get together to prepare food, honor their ancestors, and cherish relatives, both living and deceased. Chusok is a reminder that families are connected and bonded in the same fortune and ancestors live through the offspring as part of people’s daily lives.

Holiday festivities begin many days before the actual holiday, as women busily prepare food to be put on the ancestral plate for the Chusok ceremony. They begin preparations for the festivities weeks in advance by going to the market to buy the newly harvested rice, apples, crisp pears, juju beans, chestnuts, sesame seeds, pine needles, and so on. You might wonder why people need pine needles. Koreans, like many people from traditional cultures around the world, celebrate holidays with special food. Pine needles are an essential ingredient of the Korean rice cakes called song pyun. These cakes are made with finely ground new rice as the basic dough, which is filled with toasted sesame seeds, chestnuts, or peas sweetened with honey or sugar.

Making song pyun is one of the most festive activities associated with Chusok. Several generations of women work in a big circle over bowls filled with glutinous rice dough and many wonderful fillings. The song pyun are then carefully arranged between piles of freshly washed pine needles in a huge steamer. The pine needles prevent the sticky rice cakes from clinging to each other and most of all infuse the whole house with the wonderful smell of pine trees.

Grandmothers speak gently about the days when they were young, making song pyun, and tell their granddaughters, “Girls who make pretty song pyun will have pretty daughters!” Making song pyun brings together generations of women and gives them an opportunity to share their life stories. This took place more often in traditional Korea, when at least three generations lived in the same household. Nowadays most families are nuclear, and thus Chusok provides an opportunity for different generations to interact and appreciate their extended family. However, fewer and fewer people know how to make song pyun or other traditional foods. Instead, they buy prepared or packaged foods in supermarkets and department stores.

On Chusok morning the family carefully prepares the ancestral table for a memorial ceremony. The house of the eldest son is usually the site of the gathering. Family members arrive early in the morning to participate in the ceremony. The eldest male descendant from the line of eldest sons (even if he is not the eldest male in the family) usually presides over the ceremony. There are many rounds of bowing to the floor from a kneeling position, and ancestors are offered wine and food. After the ceremony all the food is taken out of the room and rearranged for the family to eat. The family sits around the table to eat the wonderful food prepared by the female relatives over the past few days and reminisce about the ancestors. After the meal some of the food that has been set aside is taken to the graves of the ancestors.

Chusok reminds us that Korea’s traditional gender roles and discrimination persist. As noted above, women spend several days cooking and preparing for the Chusok ceremony and family gathering. The men, on the other hand, relax and enjoy the festivities, and do not help much with the chores. Furthermore, since the family celebration is based upon paternal lineage, married women often are not able to celebrate with their original family. This aggravates gender discrimination, prompting some to complain openly or to disregard the tradition of Chusok altogether.

Some Christian denominations have discouraged or opposed the Korean tradition of worshiping ancestors or gods not connected with Christianity. Therefore, some Christian families honor their ancestors with prayers and hymns rather than bowing or offering them elaborate dishes. Nonetheless, Chusok is an important family holiday for Christians as well as non-Christians, as they all celebrate with their families, albeit in different ways.

Korean families are changing. In the past Koreans lived with at least three generations in one household. Now most urban families are nuclear, with only one or two children. Because of increased educational and occupational opportunities for women, as well as financial necessity, there are many more working wives than there were as recently as twenty years ago. Women also have to work to maintain a standard of living, which was sustainable with only one bread- (or rice-) winner in the family in the past. Thus the problems and challenges facing modern Korean families are not very different from those confronting U.S. families. Perhaps the most important difference is that for many Korean families educating children is the top priority. Day care for preschool children, dividing household chores among family members, caring for elderly parents, making ends meet during periods of financial hardship, and so on, are some of the problems routinely faced by Korean families. Caring for the elderly is an increasingly important issue because most modern families have only one or two children, many married women work, and, most of all, there is a lack of quality elderly care facilities.

One of the most sensitive issues facing Koreans is the division of families between North and South brought about by the Korean War (1950–53). On a family-oriented holiday, such as Chusok, this is particularly poignant. It has been over fifty years since many people have seen their loved ones, written to them, or even had knowledge as to whether they are alive or dead. This began to change dramatically in June 2000, when the heads of South Korea (President Kim Dae Jung) and North Korea (President Kim Il Sung) met for the first time in Pyongyang, the capital of North Korea. As a result, on August 15, 2000, 100 families each from South and North Korea were allowed to visit their relatives in the other Korea. Although 200 families is too few to alleviate the needs of over 7 million South Koreans reported to have families in North Korea, the August 15 event was a historic moment for the two Koreas. It signaled a giant step toward reconciliation and possible reunification in the future.

Even though many things have been changed by Korea’s rapid industrialization, urbanization, and globalization, family remains the bedrock of Korean society. Chusok is a celebration of family—both past and present.