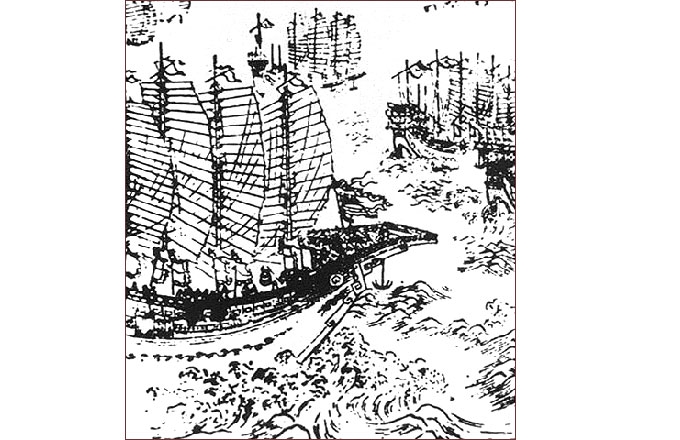 A background essay on the Ming Dynasty, its powerful trade networks and diplomatic missions as far as Africa and the Red Sea, and the domestic tensions that ultimately changed the course of world history.

In Chinese, China knows itself as Zhong Guoor the "Middle Kingdom." It thought of itself as not only the largest and oldest power in the world, but also as the source of all civilization. Written Chinese, the Confucian code of conduct, and leadership based on moral virtue were all signs of China's cultural as well as material superiority. For centuries China had had a long-established tribute relationship with surrounding areas. Rulers of neighboring states, after acknowledging their "humble submission" and performing ritualized actions such as the ketou (or "kowtow," bowing so that the head touches the floor), exchange of envoys, and trade regulations, gained recognition and were given legitimacy by the Chinese court which might even send aid to them should the need arise.

After defeating the Mongol Empire in 1368 and establishing the Ming dynasty, the Chinese emperor attempted to reestablish the tribute relationship with neighboring states. In 1402, during a devastating civil war, Zhu Di seized the throne from his nephew. Since he had seized the throne by force, Emperor Zhu Di was especially anxious to demonstrate and prove his legitimacy.

In 1403 Emperor Zhu Di ordered construction of an imperial fleet that was to include trading ships, warships, the so-called "treasure ships," and support vessels and ordered the fleet, under the command of Admiral Zheng He, to embark on a major voyage that same year. The emperor and Admiral Zheng He had been friends since the admiral was in his teens, and they trusted one another.

The voyage had multiple objectives. It would permit the Chinese to explore new areas and expand commercial and diplomatic relations. The grandeur of the fleet would dramatize the superior majesty and power of the Ming empire to peoples of distant lands, causing states of South and Southeast Asia to be incorporated into the tribute system. The fleet expected to receive demonstration of submission from rulers of areas it visited, and many foreign countries surely would acknowledge China's superiority in order to increase their trade. If people did not recognize Chinese greatness, the admiral might have to use force, but the Chinese expected that the encounters would be peaceful since it was only fitting that as many people as possible should come under the sway of the Chinese emperor, also known as the "Son of Heaven."

Opening trade routes and establishing trade through the exchange of tribute and gifts was a major goal of the voyage. Since Zheng He was a Muslim, he would be able to establish good relations with Muslim trading communities as well as with Chinese traders in the ports the ships visited. Medical research appears to have been another motivation for the voyages. Several devastating epidemics had swept through the Middle Kingdom, and many doctors and pharmacists went on the voyage, instructed to look for herbs and other medicines. Finally, Zheng He was to look for any signs of the deposed Emperor, whom some people believed was still alive and attempting to build up a power base somewhere in Southeast Asia.

The fleets were impressive, and many ambassadors and rulers from areas the fleet visited came to the Ming court with tribute, acknowledging Chinese superiority. However, several factors contributed to making many in the court, particularly the Confucian scholars around the Emperor, oppose the voyages. Once the tribute relationship had been reestablished, and the explorations completed, some questioned the need to send repeated voyages. Maintaining and manning the fleet was expensive. After the Grand Canal had been repaired, funds were expended to make it easy for grain to travel from the south to northern China on the canal, eliminating the need for war ships that would protect grain shipments from pirate raids. Was it really worth continuing these voyages?

Timeline: A Chronology Of the Ming Voyages

Zheng He commanded a fleet of 317 ships, almost 28,000 men, their arms and supplies. The fleet included several massive "treasure ships,"approximately 400 feet long and 160 feet wide. The places the fleet stopped included Champa (central Vietnam); Majapahit on Java; and Semudra and Deli on the northern coast of Sumatra. It continued to Ceylon and then to Calicut, known as "the great country of the Western Ocean." Traveling through the Straits of Malacca on its return, the Chinese defeated a pirate chief who had been threatening trading ships in the Straits. Zheng He was not able to find any trace of the deposed Emperor whom some Chinese had thought might have found asylum in Southeast Asia.

Zheng He did not go on the second voyage which probably returned the Siamese ambassador who had gone to China earlier on his own, and installed a new leader in Calicut. Again the fleet stopped at Champa (central Vietnam); Majapahit on Java; and Semudra and Deli on the northern coast of Sumatra; Ceylon; and Calicut.

This expedition's special charge concerned Malacca, a port on the Malay peninsula that was gaining importance. Stopping in Malacca, the Chinese recognized Paramesawara as the legitimate ruler of Malacca and gave him a tablet officially declaring that the city was a vassal state of China. Increasing Malacca's power, the Chinese court believed, would establish a balance of power among Siam, Java and Malacca and insure Chinese trading rights through the Straits. After stopping at Semudra, the fleet went to Ceylon where they got involved in a local power struggle among its Sinhalese, Tamils and Muslim populations. Luring the Sinhalese troops out of the city, Zheng He and his troops took the capital, captured the ruler and installed a ruler of their own choice in his place. After this voyage many ambassadors from the countries the treasure fleet had visited brought tribute to the Ming court.

This voyage headed for Hormuz and the Persian Gulf. The fleet stopped at Champa and Java. At Sumatra, the Chinese captured a pretender to one of the local thrones and sent him back to Nanjing where he was executed. One part of the fleet went to Bengal and brought a giraffe back to the Emperor. (The Chinese believed the giraffe was a magical animal comparable to the unicorn, an auspicious sign and symbol of the righteousness of the Ming reign.) Cheng He and the rest of the fleet continued up the coast of Malay; to Ceylon; the Maldives; ports on the Indian coast; and Hormuz. This voyaged marked the height of Chinese influence in the Indian Ocean.

1415: The Emperor decides to move the Chinese court from Nanjing to Beijing.

1416: Repairs on the Grand Canal are completed.

This impressive fleet was to take back home 19 ambassadors who had brought tribute to the Chinese court. While at Quanzhou, Zheng He tried to stop the persecution of Muslims there. The fleet then went to several ports on Champa and Java; to Palembang and other ports on Sumatra; to Malacca on the Malay peninsula; the Maldives, Ceylon; and Cochin and Calicut. This time the Chinese attempted to strengthen Cochin to counter the power of Calicut. The fleet explored the Arabian coast from Hormuz to Aden and the east coast of Africa, returning ambassadors from Mogadishu, Brawa, and Malinda and also stopped at Mombasa. The sailors brought the Emperor another giraffe from Africa.

Besides taking ambassadors home, this voyage explored more of the coast of Africa. At Semudra the fleet divided and the majority of the ships went to Aden and the coast of Africa while Zheng He returned to China, perhaps so he could participate in the events surrounding the dedication of the Forbidden City in Beijing as the new capital.

1421: Fire destroys much of the Forbidden City. Emperor Zhu Di first invites criticism, but soon he kills those who criticized him.

1422: Emperor Zhu Di plans a military expedition against the Mongols.

1424: Emperor Zhu dies while on military maneuvers in the north.

1424: Zhu Di's eldest son becomes Emperor. He favors his Confucian advisors and hopes to lessen tax burdens on the people caused by expensive military maneuvers, the voyages of the fleet and moving the capital.

1424: The Emperor issues an edict ending all voyages of the treasure ships.

1430: Emperor Zhu Zhanji issues an edict calling for a 7th voyage to inform distant lands of his rule and to urge them to "follow the way of heaven and to watch over the people so that all might enjoy the good fortune of lasting peace." (Levathes, pg. 160—see Sources)

Three hundred ships with approximately 27,500 men embark. Besides ports on Champaand Java, the fleet stops at Palembang, Malacca, Semudra, Ceylon and Calicut. The Chinese urge the Siamese king to stop harassing the kingdom of Malacca. At Calicut, one part of the fleet goes along the east African coast to Malinidi and trade on the Red Sea and several ofthe Chinese sailors may have visited Mecca. Zheng He, who had probably stayed in Calicut, died on the return voyage and was buried at sea.

1449: Wang leads an expedition against the Mongols on the northwest frontier. During this campaign, the Mongols capture the Emperor Zhu Qizhen and hold him prisoner.

1450: Emperor Zhu Qizhen gets free from Mongols and is reinstated as Emperor. Tension and rivalry exist between Confucian scholars and other advisors, particulars the court eunuchs. Emperor Zhu Qizhen faces the urgent question: Should the court resume the voyages or end them? 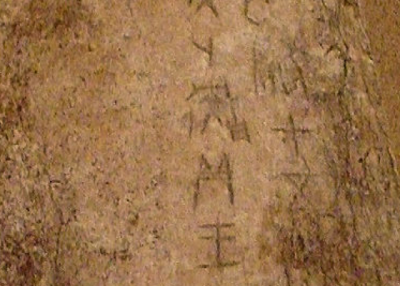 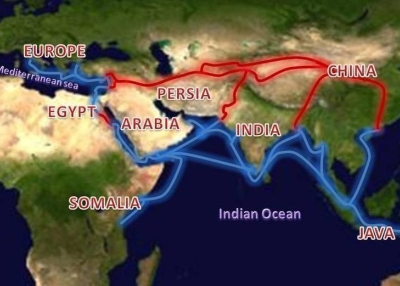