Bangladesh: In the Eye of the Storm | Asia Society Skip to main content

Bangladesh: In the Eye of the Storm 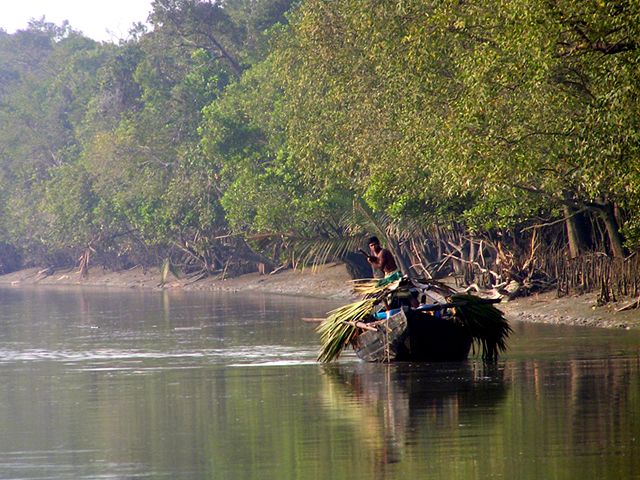 Bangladesh's close ties to the sea shielded it from one of the worst natural disasters in history: the tsunami that devastated countries along the Indian Ocean on December 26, 2004. Bangladesh’s coast, which had been built up by river sediments flowing into the Bay of Bengal, absorbed the incoming tidal wave. While almost 200,000 people perished in surrounding countries, the tsunami claimed only two lives in Bangladesh.

Unfortunately, however, it is precisely this topography that makes Bangladesh particularly vulnerable to the effects of global climate change. If these environmental effects converge with the country’s high population and widespread poverty, they will create a perfect storm of disaster.

Bangladesh lies on a flat, alluvial plain. It is neighbored by India on three sides, while its southern border dissolves into the Bay of Bengal. Two mighty rivers, the Ganges and the Bramaputra, flow through Bangladesh and fan out like tassels into the bay. This low delta and its beautiful mangrove islands are constantly transforming and shifting with typhoons, rains, and dry periods.

The soft, malleable coast is vulnerable to rising seas. Even if greenhouse gas emissions were to stop today, scientists believe that warming already underway will cause seas to rise between one and two inches over the next century. If nothing is done to curb emissions, sea levels could climb more than three feet. If this happens, 15% of Bangladesh could be under water. The mangrove forests of the low-lying Sundarban islands, a world heritage site, as well as the Bengal tiger and hundreds of bird species may disappear.

Already, salt water is mixing with fresh water in the rivers and deltas in Bangladesh, and it is mixing with the soil, ruining rice crops that people depend on for food and income. Mounting sea levels and loss of land will create even more acute human disasters and dilemmas. Where will the thirty million internally displaced people go and how will they live? What will they drink? Who will provide health care to combat the diseases that are sure to spread?

Bangladesh’s food supply is already threatened by flooding due to melting glaciers in some areas and droughts due to heat in others. Moreover, the typhoons and monsoons that routinely pummel Bangladesh are intensifying because of climate change. In 2007 a category 4 cyclone, named Sidr, killed 3,500 and displaced over two million people in Bangladesh.

Life in Bangladesh is already harsh. Bangladesh’s dense population may give a glimpse into the future elsewhere. In an overpopulated Earth, millions of people may have no choice but to live on the fringes of habitable environments. This in turn can severely increase the human toll of environmental disasters.

Environmental issues can also fuel violence and political change. When India and Pakistan split in 1947, Bangladesh was joined with Muslim Pakistan. Separated by the entire country of India, the long-distance marriage did not last. The poor response to a typhoon in 1970 added to the Bengali's frustration with the government in West Pakistan. The Bengalis revolted and, after a bloody war and the help of India, won independence from Pakistan. Might environmental pressures brought on by global warming enflame new political unrest?

Possible solutions, such as water storage, reforestation, and shelters, are expensive and difficult. Who should pay for disaster prevention and relief? Bangladesh is poor and contributes only a miniscule amount of the world’s carbon dioxide emissions that cause global warming. The United States emits more carbon dioxide than any other nation—both in total and per capita. It is also the world’s wealthiest nation. China and India, both developing countries, emit the second and fourth-most carbon dioxide overall, but their per capita emissions are small. Should they chip in? Does India, as Bangladesh’s neighbor, have a special obligation to intervene?

The extreme effects of global warming in Bangladesh may expose the deep chasm between rich and poor nations. What are the risks, not only to the Bangladeshis, but also to the rest of the world, if warnings of the impending storm are ignored?