SALT LAKE CITY, May 24, 2018 – At a time when communication between Chinese and Americans is more important than ever, more than 1,300 educators from across the States and the globe received a warm Utah welcome at the 11th annual National Chinese Language Conference. The three-day conference was hosted by Asia Society and the College Board, and in cooperation with Hanban, from May 17–19, 2018, in Salt Lake City. 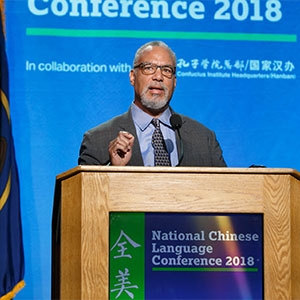 The conference celebrated the progress the U.S. has made in the development of Chinese (Mandarin) immersion programs and highlighted Utah's key role in that effort. Further, it explored how Chinese language programs are shaping a new generation of American youth who are ready to face the challenges and seize the opportunities of a dynamic and global economy.

Asia Society's Center for Global Education Director and Vice President of Education Tony Jackson echoed the importance of Chinese language programs in his remarks, telling educators, "all of you are preparing the next generation of stewards of the U.S.-China relationship, not just of those who will become the world's diplomats, but more importantly, of those youth who will determine … the day-to-day discourse of commerce, science, technology, security and the many other ways which the U.S. and China are connected."

Key figures in government, education, and U.S.-China relations spoke at the conference, including:

The full list of speakers and more information about the conference can be viewed on the National Chinese Language Conference website.