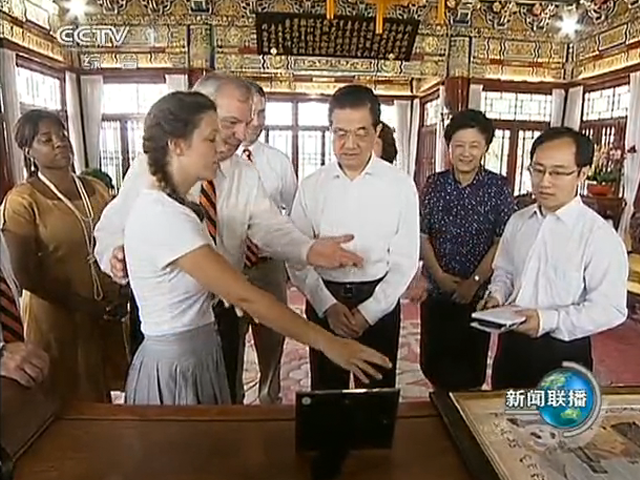 BEIJING, July 19, 2011—Last week, a group of students were a part of something very few people in the world have had a chance to experience: they were welcomed at the headquarters of the Chinese government by the President of China, Hu Jintao.

Zhongnanhai, an expansive complex in the heart of Beijing, is where the central government carries out its work. Guarded by high walls, the complex is not open to the public. Only heads of state and high-ranking officials are typically allowed into the complex.

Watch the broadcast (in Chinese).

The students at the Walter Payton school were invited by President Hu personally. President Hu, during an official state visit to the United States last January, took one day to visit the public school in Chicago, which is affiliated with Asia Society’s International Studies Schools Network. He said that the school’s learning philosophy and teaching methodology impressed him. He especially liked the Chinese language and culture program, which served as a resource for all of Chicago Public Schools. He extended an invitation for 20 students and faculty to travel to Beijing during the summer.

The Chicago students boarded a plane on July 11, bound for Beijing. They brought with them a handmade gift, a collaborative piece of artwork that was affectionately titled "Grandpa Hu, we love you!"

President Hu, addressing the Walter Payton students and faculty, reminisced how impressed he was with the school. “Your love of learning Chinese language and culture made a very deep impression on me,” he said.

Addressing the students, he added, rather poetically, “The big tree of US-China relations, if cultivated carefully, will have deep roots and be very fruitful.” During the school visit in Zhongnanhai, the President was joined by high-ranking leaders State Councilors Liu Yandong and Dai Binguo, as well as Central Secretariat Ling Jihua.

This video aired on CCTV, China’s main television network, during prime-time news. The eight-minute clip—extraordinarily long for a news broadcast—signals that few people, including state media and their viewers, have had a chance to see the Zhongnanhai complex.

Asia Society’s International Studies Schools Network (ISSN) is a national network of design-driven public schools that are preparing globally competent students who are ready for college and the complex world beyond.

The ISSN responds to two intertwined imperatives facing American education. The first is to overcome the chronic problem of poor academic performance among low-income and minority students. The second is to prepare students for work and civic roles in a globalized environment, where success increasingly requires the ability to compete, connect, and cooperate on an international scale.

Walter Payton College Prep is what is called an “anchor school” within the network. The teaching and learning practices at Payton serve as a model for other network schools.

Since 2003, Asia Society has worked in partnership with school districts and charter authorities to create the ISSN. The network currently includes 34 schools in throughout the United States. 85 percent of all students are minorities, and 74 percent are from low-income families. In a limited study, research shows that 92 percent of Asia Society students are graduating high school (compared to a 50 percent average in similar socio-economic settings); of that, 94 percent continue on to four-year colleges and universities.