A Dry Future for India? 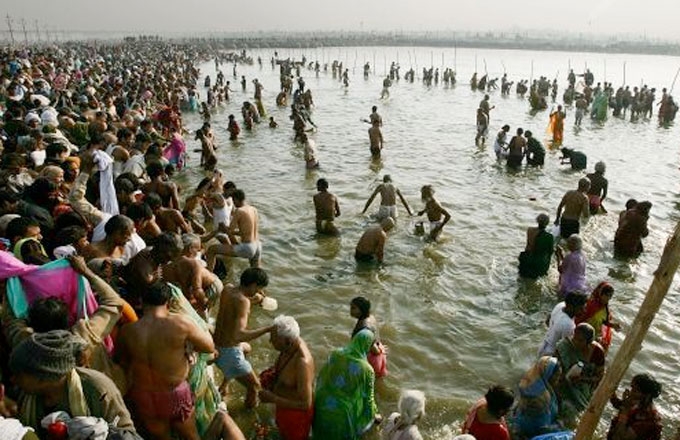 NEW YORK, April 15, 2009 – With nearly a sixth of all people in theworld, many of them still mired in poverty, India faces an unprecedented water crisis in the next two decades. Major urban areasare unable to provide a reliable water supply, development of energy and the industrial sector face constraints, and scarcity of water forirrigation is a leading concern of farmers. With a lack of coordinated government investments in water infrastructure, governance, and agricultural productivity, India faces a serious resource and environmental challenge.

A panel discussion convened by the Asia Society, the Earth Institute's Water Center, and the South Asia Institute at Columbia University, keynote speaker Alok Sikka, of the Indian government's Ministry of Agriculture emphasized that India’s key challenge for the agricultural sector is water efficiency—producing more food using less water. The importance of this challenge lies inthe fact that water and development are inseparable. Water is essential for food production and agriculture is the largest consumer of water inthe country. Rice, for instance, is the most widely grown crop throughout the world, but it also requires large quantities of water tocultivate. Mr. Sikka recommended implementing more water efficient agricultural practices and investment in rainwater management, which,if not implemented, could lead to water shortage and food insecurity. Adding further to India’s resource strain is the use of water fordomestic and industrial purposes.

Panelist Abhiram Seth, Managing Director of AquagriProcessing Pvt. Ltd., suggested that one of the most promising new innovations is algae cultivation, which can improve the quality water when harvested, with the additional advantage of serving as abio-nutrient. Andrew Robertson, a research scientist at the International Research Institute for Climate and Society (IRI), provided an overview of climate change in India, which is projected to increase variability in seasonal conditions and enhance the effects of El Nino—effects which included a severe drought between 1790 and 1791in which millions of people perished. Finally, David Ludden, Professor of Political Economy and Globalization in the Department of History at New York University, examined the social aspects of water security in India. Professor Ludden asserted that safe water is a public resource to which access is a human right; yet it appears to be controlled by the relatively privileged and politically powerful, who engage marginally with the poor.

Overall, the speakers examined how the uncontrolled exploitation ofwater can be tamed, and discussed possible policy reforms in India's water sector that would help to ensure a sustainable supply of water inthe country. The panel discussion launched a four-day conference organized by the Earth Institute Water Center at Columbia aimed at addressing water security in India.