A Discussion on the Domestic and Foreign Policies of the Philippines 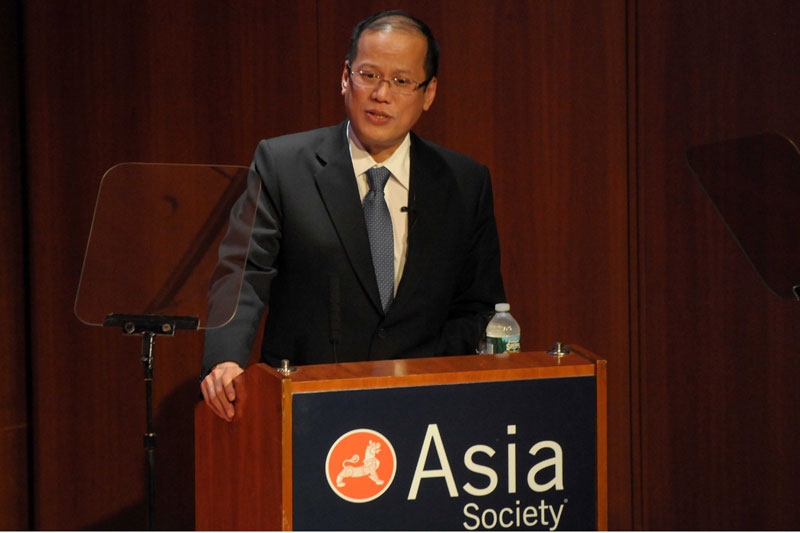 Thank you. Please sit down.

I assure you that is not half of the speech. (laughter)

I have a bit of a problem speaking in places where both my mother and my father spoke before me. I am sure that they continuously watch over me and if I shame the family name I might wind up below the stage after this speech, (laughter) especially for speeches that they considered very very important when they were around.

On August 4, 1980, my father stood in this very hall to assert his faith in the Filipino. He had arrived in the United States three months before to undergo a heart bypass, due to the rigors of his imprisonment by the dictatorship. The dictatorship offered him a reprieve, but true to its nature, one dependent on its whims. Having already been condemned by the dictator’s kangaroo court to death by musketry, my father refused to hoist a white flag. “The Filipino,” he insisted, “is worth dying for.”

Three years after he said that in this very place, my father went home: not to die, but to infuse new life into the demoralized ranks of the opposition to the dictatorship. His assassination became the ultimate proof of the sincerity of what he had proclaimed in this very hall.

In 1986, my countrymen collectively and peacefully, defied the dictator’s tanks and demonstrated their faith in themselves. The result was that the dictator fled and democracy was restored without bloodshed.

My mother, too, had the opportunity to address the Asia Society when she was president. Her message to you then was to be the enduring message of the remaining years of her life: that the democracy that we had regained at such a high price could only be ensured by a vigorous commitment to making our democratic institutions work.

In 2009, my countrymen again took to the streets to accompany my mother to her last resting place. This massive expression of solidarity evolved into an effort to draft me to run for the presidency in 2010. At the polls, my countrymen conferred a solemn mandate on me to make democracy the means for eliminating corruption and alleviating poverty.

Our administration is committed to transformation: from a country where nice guys finish last, to one where those who deviate from the straight and narrow will face punishment for their crimes. Our goal is to empower the citizenry so that regardless of who is in power, the citizenry demands the authentic rule of law. The task I have assigned to my colleagues in government is to demonstrate this by means of sustained reforms that foster merit, transparency, and accountability.

Consider what I believe, as my father taught me, is the most important freedom: freedom from hunger. We have a government corporation called the National Food Authority, which is tasked with ensuring an adequate supply of rice.

Imagine, from 1972 to the year 2000, the NFA had incurred a total of 12.9 billion pesos in debt. However, within a year in office, my predecessor had increased the NFA’s debt to 18 billion pesos. They would, in the course of the next eight and a half years, import much more rice than what was needed, resulting in an accumulated 177 billion pesos in debt, by the time she stepped down from 12 to 177.

Instead of the illogical importation policy of the past, we focused our energies on revitalizing rural irrigation, which has resulted in the improvement of the first dry season crop yields. This year, our government would import 64 percent less or a total of 860,000 metric tons of rice which already includes a 200,000 buffer in case the typhoon Gods are not smiling upon us.

Farmers today have bigger yields and enjoy good prices; rural infrastructure is being improved; and the NFA’s debt has been trimmed down to 153 billion pesos.

Food security is the foundation for individuals to be given a fighting chance to achieve social mobility. We are investing in our fellow citizens by means of  Conditional Cash Transfer program or in Tagalog called Pantawid Pamilya, which is patterned after Brazil’s Bolsa Familia.

We are providing cash assistance to eligible poor families on the condition that pregnant mothers and children avail of preventive health care and that children regularly attend their classes. This program already covers some 2.3 million poor families:  this is their key to social mobility.

Mobilizing resources for these programs depends on cutting wasteful programs and rooting out the corruption in our bureaucracy. For instance, one of the agencies where large scale graft and corruption was traditionally rampant was the Department of Public Works and Highways. But by instituting open, competitive, and transparent bidding, the department has saved 2.5 billion pesos from 3,692 projects nationwide from July 2010 to June 2011. We expect roughly six to seven billion pesos in savings by the end of this year, which can be utilized for other priority development projects.

To promote fiscal transparency, our Finance Department has created a website called “Pera ng Bayan” or the people’s money. It allows the public to anonymously report tax cheats, smugglers, and crooks. The government likewise subjects government officials to lifestyle checks and vets their statements of assets and liabilities to find out if what they have acquired is commensurate with their declared income.

These campaigns are yielding results. A total of 67 tax evasion cases and 43 smuggling cases with claims totaling more than 26 billion pesos and 58.16 billion pesos, respectively have been filed against certain groups and individuals.

But it is not enough to be efficient and honest in public spending. We must also attract foreign investments, and despite the difficulties in Europe, the U.S. and Japan.

Our economic diplomacy has three key objectives. With more or less 10 million Filipino workers overseas, their well-being is of paramount importance and  concern. Our foreign service is tasked with protecting Filipinos wherever in the world they choose to work.

Second, we are securing more markets for our exports and enticing more tourists to visit the country.

Third, we are working on attracting investments to create jobs at home and ease poverty so that our countrymen will not be forced to go overseas in the first place.

The Philippines also ranks fourth in the world in terms of shipbuilding.

We are also undertaking Public-Private-Partnerships to modernize our infrastructure. Our mantra here:  the right project, with the right quality, at the right price, run by the right people, and delivered right on time. Given the experience with projects in the past, it is important that the correct and legal processes are followed so that they can stand up to public scrutiny.

The World Economic Forum has also ranked us 75th in their latest Global Competitiveness Report: a ten-spot jump from last year’s 85th place. This jump is the highest for our country since it entered the survey, and is evidence that the Philippines, which opened for business under new management only a little over a year ago, is indeed faring very well.

Recognizing our successes in our anti-corruption and good governance efforts, your government’s Millennium… the U.S. government’s Millennium Challenge Corporation conferred Compact Status on the Philippines, for which we received a 434 million-dollar grant. One of the reasons why the Philippines was found deserving of the grant was the headway we made in fighting corruption in government.

The Philippines also takes pride in having been chosen as one of four pilot partners for President Obama’s Partnership for Growth Initiative. Furthermore, most recently, the Philippines was invited to serve in the Steering Committee of the Open Government Partnership. This is a new multilateral initiative that encourages governments to promote transparency, empower citizens, fight corruption, and harness new technologies to strengthen governance. That we have been chosen to be part of this project is yet another affirmation that the Philippines is a good place to do business in and a good country to do business with. (applause)

Naturally, these measures to provide safety, security, and opportunity for our countrymen extend to the defense of our country. Good fences, as the saying goes, make for good neighbors. In our defense posture, our top priority is maritime security, especially with regard to the West Philippine Sea.  (applause) This is a focal point of our security cooperation with the United States of America.
I have just signed an Executive Order establishing a National Coast Watch System for a coordinated and coherent approach on maritime policy issues and operations. We are also modernizing our armed forces, which have lagged behind our Southeast Asian neighbors, by investing 40 billion pesos over the next five years. Maintaining freedom of navigation in the West Philippine Sea and protecting our sovereign rights over our 200-mile Exclusive Economic Zone are among our security imperatives. It is essential for the Philippines to acquire a respectable deterrent capability to protect its sovereign rights over the area, which is vital for its energy and food security, as well as for international maritime trade.

The Philippines welcomes America’s active re-engagement across Asia by strengthening its traditional alliances, actively making its presence felt in ASEAN, participating in the agenda-setting of the East Asia Summit, and in striving to manage its relations with China in positive directions. The participation of Russia in the East Asia Summit completes the list of those who deserve a seat at the table where strategic issues are tackled, with ASEAN at its core.

The Philippines engages the two great powers in this vibrant region, the U.S. and China, whose economies are intertwined. They are in a complex relation with elements of both cooperation and competition. Their efforts to overcome their mutually acknowledged “strategic mutual distrust” that stemmed from the Cold War era are vital, given that the economies in the Asia-Pacific region prospered because relative peace and stability reign in our part of the world.

From a geo-strategic standpoint, the Philippines is at the vortex of the most dynamic and fastest growing region in the world―the Asia-Pacific. By 2015, we will be part of an integrated Southeast Asian economic community with a combined population of 600 million with increased purchasing power and a combined Gross Domestic Product of 1.8 trillion dollars―making it the ninth largest economy in the world.

President Obama himself noted that “American exports to ASEAN are growing twice as fast as they are to other regions, so Southeast Asia will be important to the goal of doubling America’s exports gross growth.”

As for the Philippines, we wish to maintain good neighborly relations with China. In our competing claims in the West Philippine Sea, we have already drawn the line between what is disputed and non-disputed in terms of where we would never relinquish our sovereign rights. We have likewise called for the peaceful and rules-based settlement of disputes. From our vantage point, and as we have heard affirmed in our recent state visit to China, this maritime dispute does not define the multi-layered relations between the Philippines and China.

At the same time, the United States is our only defense treaty ally. With America, we share fundamental values of freedom, democracy, and belief in open markets. Whenever two partners share the same core values, their relationship is bound to endure.

In 1981, my father spoke of the redemption of our democracy.

In 1986, my mother spoke of the need to defend democracy.

Today, I look forward to continuing our conversation, by means of the open forum following my opening remarks, on the ways we are seeking to nurture democracy.