Democracy in India and Pakistan: A 'Contingency' Story

Does democracy have a future in South Asia? 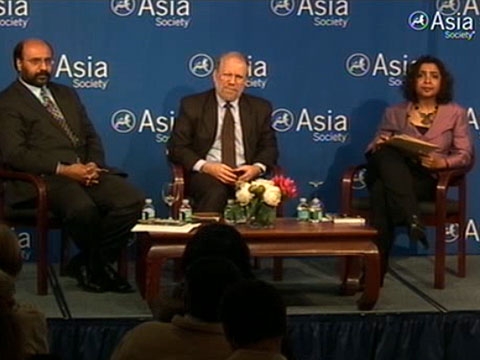 New York, February 15, 2011 - Philip Oldenburg, author of India, Pakistan and Democracy: Solving the Puzzle of Divergent Paths, spoke here about the mystery behind the divergent political paths of India and Pakistan.

Recognizing many similarities between these two South Asian neighbors, the panel explored the circumstances that led them down very different political paths. Oldenburg's argument boiled down to historical circumstances. He argued that 1977 was a pivotal year for both countries. With the state of emergency in India, the country was heading towards an authoritarian state; but when Indira Gandhi called an election in 1977, Oldenburg argued, she changed the course of India's political future back towards democracy. In fact, democracy became much stronger after the election, with marginal classes brought into the political fold and the opening up of the press.

Meanwhile, in 1977 in Pakistan, Bhutto took "the path [...] that brought Pakistan to its autocratic path."

Abbas framed the dilemma differently, seeing the military and the role of religion in Pakistan as major obstacles to democracy. He was firm in his belief that Pakistan has to move away from military rule in order to succeed in the future. Yet Abbas took an optimistic stance on the prospects for democracy in the country overall, noting that freedom of speech and judicial rule of law have improved there, measurably if incrementally.

To assess the degree of vestedness in each society, Chandra looked at political participation, showing how the number of voters in India and the large participation in elections has increased throughout the years. In Pakistan, the trend is in the opposite direction, with political participation dropping. She explained that in India, politics serve the interests of citizens, whereas in Pakistan, there is still relatively little vested interest in democracy.

Despite their differences of opinions about the past, all three speakers had a positive outlook for the future of democracy in Pakistan.