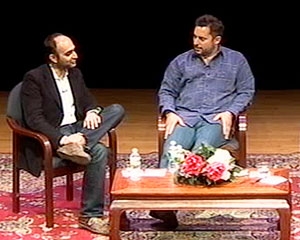 NEW YORK, February 23, 2009 – Critically acclaimed writers Daniyal Mueenuddin and Mohsin Hamid shared their similar experiences and passion for writing when they sat down with Asia Society Associate Director of Cultural Programs Helen Koh to celebrate Mueenuddin's debut work, In Other Rooms, Other Wonders, a collection of short stories based on Mueenuddin's farm in Pakistan.

Mueenuddin and Hamid are both Ivy League-educated Pakistanis who gave up law to take up the pen, and both expressed a certain ambivalence about their birthplace and the influence it has had on their work. Nostalgia, displacement, yearning for home, and concern about the future of Pakistan played central roles in the discussion.

Hamid, who was born in Lahore, discussed the simultaneous feelings of inclusion and exclusion he has regarding his hometown. "I’ve always felt there is a story to Lahore and it is a story I want to be a part of," he said. "... Although I feel very comfortable and of it, part of me is also not of it, so I will always be looking at it as an insider who is also outsider." Mueenuddin explained that straddling two worlds has enriched the works of many Pakistani writers such as Mohammed Hanif, Kamila Shamsie, and Nadeem Aslam. His own nostalgia for belonging is part of his motivation for writing. "You miss it while you're away, but even when you are there you can never quite grasp it, you never entirely belong to it." Mueenuddin joked that people like himself and Hamid are IDPs: "We’re really internally displaced—we’re displaced inside of ourselves. But for us that is a rich position somehow."

Although they were both young lawyers when they began their literary careers, Mueeniddin and Hamid approached creative writing very differently. Hamid debuted with a novel, Moth Smoke, and was curious as to why Mueenuddin chose the short story format for his first work. Mueenuddin explained that he began late, joking the first thing he wrote was the application for his MFA program. Hamid, on the other hand, took creative writing courses in college with Toni Morrison and Joyce Carol Oates and was inspired by the "romance of being in proximity to writers you could think of as being the real deal."

Both men said that empathy is important to developing realistic characters. Mueenuddin described how doing business on his farm provides excellent insight into the human mind. "There is nothing that lets you understand someone better than doing business," he explained. "There is an intimacy to business that has been helpful in allowing me to get into people’s heads." He described how many writers such as Balzac and Joyce were in business ventures, and believed that "anything that immerses you in the world is good." "The worst thing is to be living in New York City writing about a young writer who can’t figure out what to write about," he joked.

Although both Mueenuddin and Hamid were educated in the US, both have returned to Pakistan either literally or imaginatively. Both authors write in English, but they are both very aware of how censorship in Pakistan has influenced their work. Hamid explained that self-censorship is an inherent part of being a writer. "It is not something that I necessarily like, but nor is it something that I rail against." Mueenuddin pointed out that censorship has been the norm through most of history and that writers today have an extraordinary amount of liberty. He believes, however, that the increasing censorship in Pakistan is "tremendously oppressive" and robs writing of its playfulness.

They also acknowledged that their works may deal with political themes, but at the center are classic love stories. Hamid explained that Pakistan really privileges love stories and that he believes Pakistan is "a very loving place," despite its rough exterior. Mueenuddin pointed out the paradox in Pakistan of treating love like a forbidden secret, and yet elevating it to such great cultural heights. This duality of sweetness and ruthlessness is a prominent theme in his stories.

Before closing, the two alluded briefly to current projects. Mueenuddin is working on a love story set in Pakistan, while Hamid is writing "a series of things on Pakistan, London, and Europe."