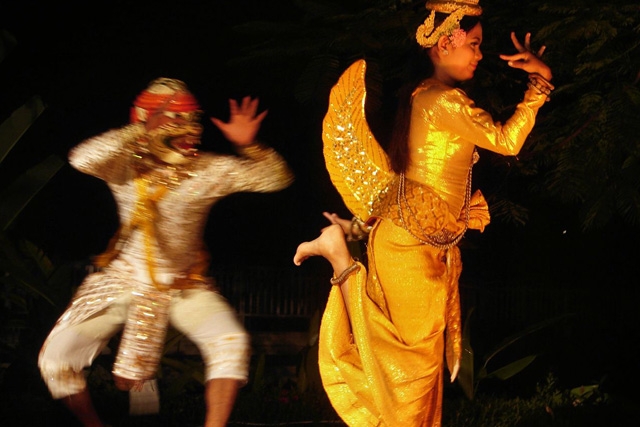 Possessing the power to capture imaginations and emotions, and thus to “transport” people to other times and places, dance is sensually and socially impassioned. It is an integral component of spiritual life and rites of passage, and a popular form of entertainment for people the world over. In Cambodia, this is true as well. At New Year time in mid-April, for example, dancers of the court tradition enact sacred legends meant as offerings. If the deities are pleased with the presentation, it is believed, they will bestow blessings on Cambodia and her people. Villagers perform rites which include dance in propitiation of ancestral spirits at select times throughout the year. As part of a wedding party, guests of all ages dance in circular-patterned social dances. And on a theatrical stage, a range of dance forms may be featured.

Cambodian classical dancers trace their art to carvings of celestial dancers on temples dating back 1,000 years to a time when what is now Cambodia was the center of the vast Angkorian Empire, and to stone inscriptions which pre-date those carvings. The dancers fashioned in stone were depicted in the heavens, dancing for the gods. Their earthly counterparts - dancers of the Kingdom of Cambodia - have for centuries been linked both to religious beliefs and the monarchy.

Cambodian dances of this tradition are populated with princes and princesses, male and female deities, giants (often evil) and monkeys (often good-hearted). (Girls dance the roles of princesses, princes, gods and goddesees, and giants; boys dance that of the monkey.) While some works are complex dance-dramas of love and war and magic, others are considered “pure” dance pieces, meant to evoke a sense of reverence without telling an explicit story.

When audiences take in scenes in which monkeys fly, giants transform themselves into animals, goddesses swim the seas, or princes fight choreographed duels, they understand what is before them in various ways. Beyond the story-line, metaphors for proper social behavior are enacted through the different characters and their relations with one another. Mythico-historical tales evoke a sense of the Khmer past, and help maintain a link to a collective history. In general, for both dance-dramas and “pure” dance pieces, the costuming reminds the on-looker of ubiquitous images of tevoda (celestial beings), thus conjuring an atmosphere of the sublime, even when the gods are not specifically referenced.

Those who come to take on the mantle of classical or court dancer do so after an arduous training period. At the Royal University of Fine Arts, children enter the dance department at age seven or eight. They practice their technique three to four hours each morning, and study regular academics in the afternoon. For the first year of training, students learn the set of thousands of basic positions and movements by repeating it over and over again while singing the rhythm of the drum, and while having their bodies and limbs manipulated into place by their teachers. (The children wait a year or so before being permitted to dance to live music.) Over the course of the next nine years students progress to take supporting roles in dances and then, for the most talented, to learn starring roles in specific dramas. Throughout their years of training the dancers engage in strenuous stretching exercises meant to foster the suppleness and strength required by a dance aesthetic that values the constant flow of energy to the extremities: fingers bent back to form a crescent, toes flexed, lower backs arched.

The Royal University of Fine Arts also trains folk dancers - those who will perform pieces choreographed by colleagues and teachers that depict aspects of life in Cambodia’s countryside. Folk dancers study with classical dancers for their initial training. After a few years they are selected to specialize in folk dance, which while boasting its own set of basic postures and movements, nonetheless incorporates much of the classical aesthetic into its choreography.

Far from the official academy, village dancers are most often farmers by day, and performers on special ritual occasions. Knowledge of both the ceremonial components of a specific rite and of the performance technique are passed down from generation to generation at the local level. While some regions of the country have unique performance traditions, in others one can see the same stories enacted, though in different guise.

Whether in a village clearing, in a court pavilion, or on a proscenium stage, Cambodia’s dancers communicate aspects of what it means to be Khmer. Dance, with all its complexity and diversity, is a potent symbol of identity for Cambodians.