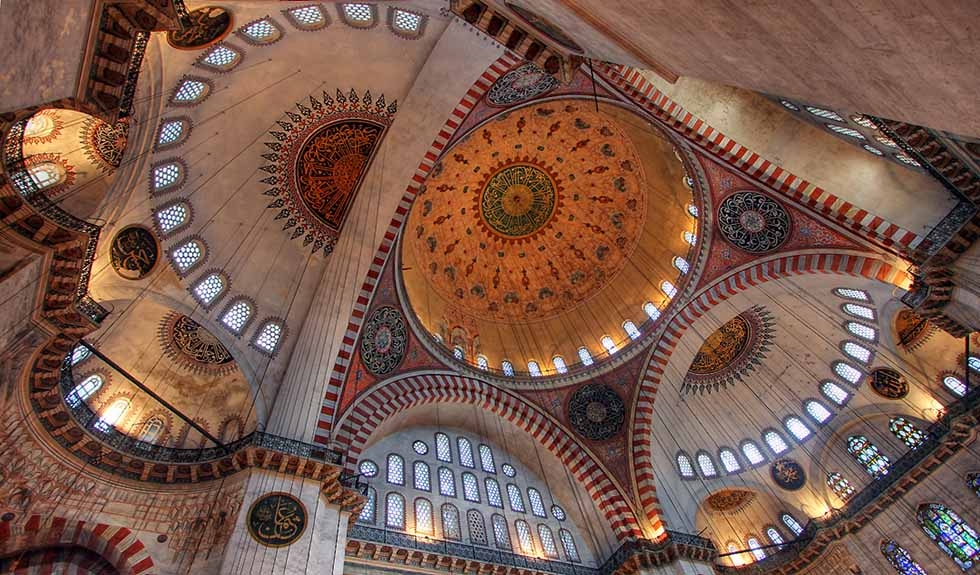 "O people! We created you from a single (pair) of a male and a female, and made you into nations and tribes, that ye may know each other (not that ye may despise (each other))." Qur'an, Sura 49:13

Islam and the Arts
Through its migration to cultures and countries around the world, the practice of Islam varies widely and has given rise to great diversity of expression, including the many art forms created or enriched by Muslim artists around the world. Creative Voices of Muslim Asia aims to explore these diverse artistic expressions, offering a range of voices from within Muslim visual, vocal, instrumental, dance, and performing arts communities, helping to increase American audiences’ understanding, knowledge and respect.

The arts take many forms, embodying unique voices and wide perspectives, as well as a range of local and global influences. Music has historically been a major feature of Islamic arts, with traditions that range from the Arabic maqam, through the ecstatic qawwali vocal performance of Pakistan, to the seudati dance of Aceh, Indonesia. More recently, Muslim vocal artists have turned to hip hop and spoken word as contemporary genres that offer particularly fruitful avenues for thoughtful self-expression. Muslim cultures’ rich literary heritage includes poetry, short stories, and historical and scientific studies. Key works have been written in all the major languages of the Muslim world (Albanian, Arabic, Persian, Spanish, Turkish and Urdu, as well as South and Southeast Asian languages), with a compelling new body of work appearing since the early 1900s in English, French, Dutch, and the other languages of Muslim-American and Muslim-European communities.

Dance and theatrical productions similarly reflect the diversity of the people, cultures and languages that all in some way have been changed and enriched by interactions with Islam. Dance styles range from religiously centered spiritualistic Sufi movements aimed at decoupling mind and body in an effort to connect with God to elaborate, stylized court rituals; group line or circle dances are also popular during family or community gatherings. Many dance forms have developed in conversation with Muslim and non-Muslim cultures alike, drawing upon a wide range of influences at the formal as well as the popular levels. Theatrical productions have also drawn from a rich mixture of traditions and cultural influences, including the storytelling traditions found in many cultures. Modern theater has in some parts of the Muslim world also drawn creatively from European influences like those of Bertolt Brecht.

The Muslim world also has a long-standing, rich tradition of visual arts production. The visual arts range from naturalistic and more stylized paintings that depict rulers or illustrate scenes from well-known stories, to pattern decorations used on ceramics, tiles, and fabrics, and extend from artisanal productions intended for daily use or ordinary home décor to individual masterpieces commissioned by wealthy patrons. Starting in the 1920s, film has provided an increasingly an important avenue for visual and performing arts expression, with filmmakers using the medium to explore personal narratives, probe social issues, investigate historical moments, and engage in local articulations of magic realism.

What is Islam?
Islam, one of the world’s three major monotheistic religions, teaches the oneness of God (known in Arabic as Allah), who has revealed his message through a succession of prophets – the prophets of the Jewish tradition, including Jesus - and finally through Muhammad (ca. 570-632 CE); “Muslim” is the adjective that describes people who believe in Islam and various aspects of the faith and its practices . The primary religious text of Islam is the Qur’an (Koran), the collected revelations of God’s message to humanity, delivered by the Angel Gabriel to Muhammad over a period of several years. Like the Torah and the Bible, the Quran is a complex work, and many Muslims spend time studying its words, the stories and injunctions it contains, and the various scholarly interpretations in order to develop a fuller understanding of God’s message. Other sources of inspiration and practical advice for Muslims include the hadith, short anecdotes about or quotes from Muhammad. Because Muslims believe that God chose Muhammad above all other people to be God’s final messenger to humanity, Muhammad is sometimes described as the “perfect man”, so Muslims take his behavior and views as guidance.

Scholars often list five specific expectations that Muslims should fulfill, which they call the “Five Pillars”. These are:

There are no priests in Islam, but there are many religious professionals, known as ‘ulama, who interpret tenets of faith and matters of practice through careful study of the Qur’an and the hadith in light of other religious scholars’ writings and commentaries. Those who focus more on practical and legal issues may issue fatwas, or legal advice on a particular question, based on their reading of existing scholarly consensus on a similar issue, and in light of the general interpretive approach of a particular school of thought – sometimes described as a “school of law” – of which there are four in the Sunni tradition and one major one in the Shia tradition. Sunni Muslims, who comprise about 85 percent of all Muslims, believe that the leadership of the early Muslim community was appropriately given over to those men who received the consensus of the community, and do not attribute any special religious or political position to descendants of the Prophet’s son in law, Ali. Shia believe that the leadership of the early Muslim community should have passed to Muhammad’s family members, since they shared the blood and family culture of the “perfect man” chosen to be God’s final messenger. Over time, differences in religious practice and behavior have increased, further differentiating Shia and Sunnis, but they share a common belief as Muslims.

Where is Islam?
After the Prophet’s death, Islam continued to expand. At the height of its power between the eighth and fifteenth centuries, a united Muslim empire included all North Africa, Sicily, Egypt, Syria, Turkey, western Arabia, and southern Spain.

In the early stages of conversion, trade passing from Yemen and the Swahili coast across to the Malabar Coast and then Bay of Bengal was also influential, as well as the growing connections with Muslims in China and India. Today Indonesia, with the fourth largest population, is home to the largest Muslim population in the world.