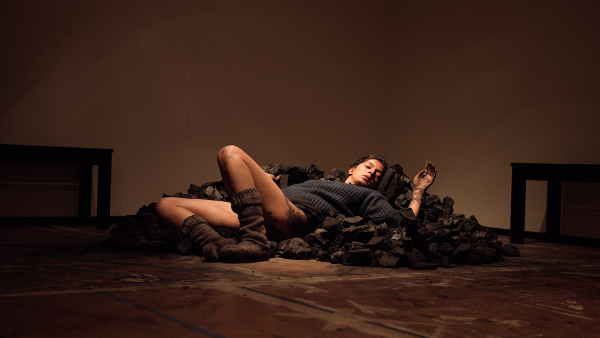 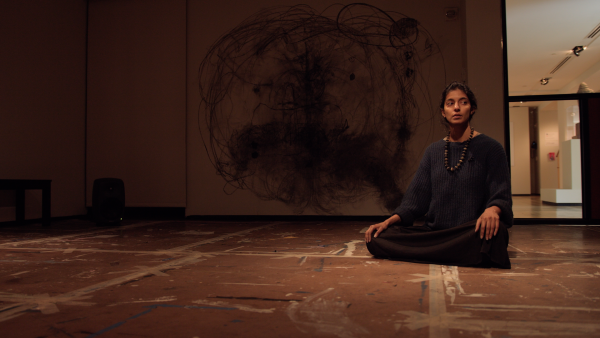 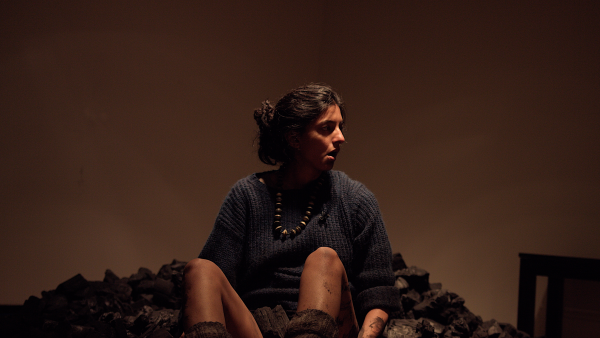 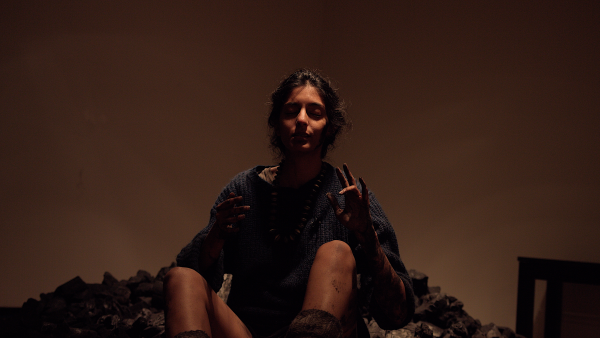 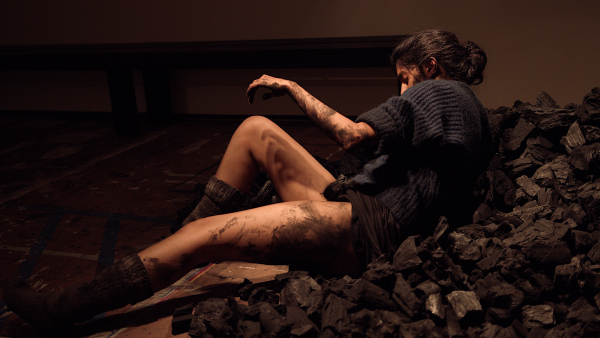 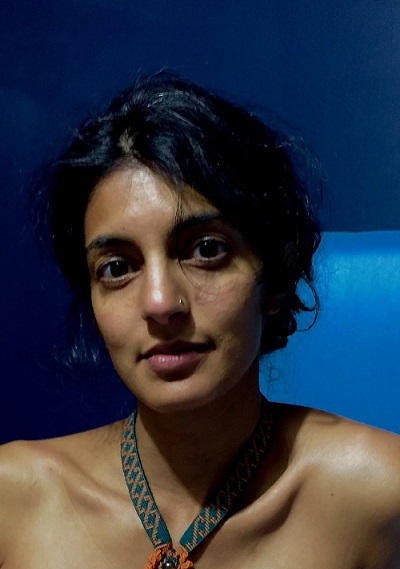 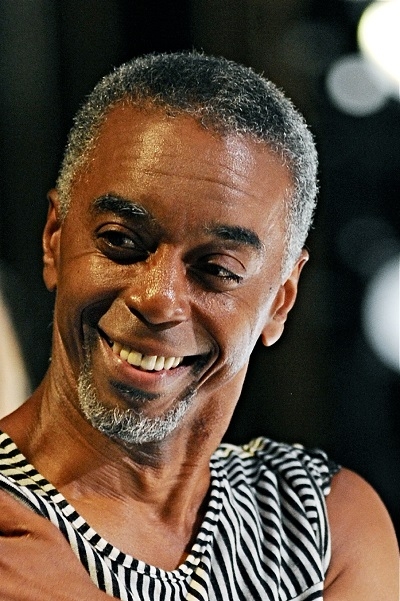 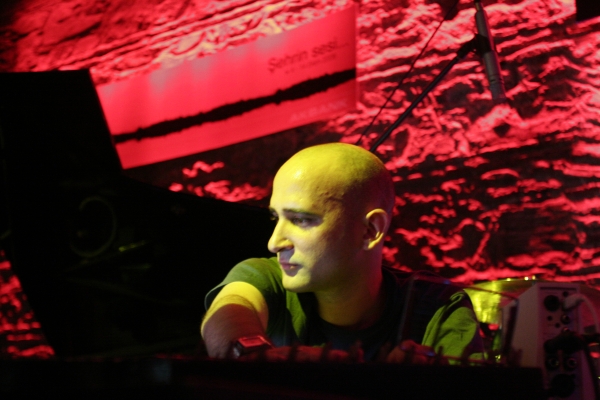 This ember state is a voice and sound performance work created by Samita Sinha in collaboration with Dean Moss and Cenk Ergün. This Asia Society commission is a radical deconstruction of Indian classical music to investigate psyches of sexuality and gender. Sinha uses as a point of departure the myth of Sati—the Hindu goddess who self-immolates in sacrifice—and the idea of dark matter.

Sinha’s distinctive vocal work and Ergün’s live composing on self-built electronic instruments create a potent sonic environment. During this hour-long journey, sound travels within and outside her body and the gallery walls in which she performs, enveloping and transporting witnesses of the work. This piece was created in residency at Asia Society and is presented in an intimate gallery setting with a maximum capacity of 25 people per performance.

This performance contains nudity and is not suitable for children.

According to artist Samita Sinha:

This ember state deconstructs Indian classical music through the pussy—as source of sound and silence, and site of cultural inheritance—to re-imagine female spirit and flesh.

I have been distilling compositions and elements of Hindustani (North Indian) raga to create an abstract, enfleshed language of fragments, a kind of ruins of sonic material. Each shard contains the past and the possibility of being enacted anew: architected and opened into another mode of being, thinking, and relating.

Sinha describes a moment from the myth of Sati that sparked This ember state—the brink between Sati’s sacrificial absence and all-encompassing presence:

"where shall I find you again" the helpless father asks
Before becoming sacrifice itself
Sati answers
"everywhere, in every time, in every place, in every being.
there is no thing in the world where I shall not be".
and by her own heat burns into a column of ash.

Quotes excerpted from Roberto Calasso’s Ka: Stories of the Mind and Gods of India.

Commissioned and produced by Asia Society as part of Creative Common Ground, an initiative that expands contemporary performance practice by commissioning, producing, and presenting artists who explore beyond traditional disciplinary boundaries.

Composer and vocal artist Samita Sinha combines tradition and experiment to create sound and performance work that investigates the experience of being a body in the world, and psychic charges past and present. She is currently at work on This ember state, commissioned by Asia Society and set to premiere in April 2018. Past performance works include bewilderment and other queer lions (2016) commissioned by Performance Space 122 and Invisible Dog Art Center for COIL Festival, and Cipher (2014-15), a solo work that toured nationally (The Kitchen, Portland Institute of Contemporary Art’s TBA Festival, REDCAT, Wexner Center for the Arts, Virginia Tech) with support from National Endowment for the Arts and National Performance Network. Sinha has performed, exhibited, and taught at the Rubin Museum of Art as well as Centro Nacional de las Artes in Mexico City, and will teach at Swarthmore College in 2018. She has composed and performed original scores for dance and theater works by Dean Moss (whose Petra will premiere at PS 122 in January 2018), Fiona Templeton, and Preeti Vasudevan and vocal directed Daria Fain and Robert Kocik’s Commons Choir; as a vocal performer she had the opportunity to work with the late Sekou Sundiata and Robert Ashley.

Dean Moss investigates the fluidity of self and perceptions of other, through multidisciplinary performance collaborations often incorporating video and audience participation. He is the recipient of a Guggenheim Fellowship in Choreography; the Doris Duke Impact Award in Theatre; a Foundation for Contemporary Arts Artists Grant; and a New York Dance and Performance “Bessie" Award. He was the Curator of Dance and Performance at The Kitchen from 1999-2004 and a Curatorial Advisor until 2009. Moss has lectured internationally including in Korea at Kookmin University, also at Tokyo University of the Arts, and for three years at Harvard University. At Harvard, he received a Certificate of Distinction in Teaching from the Derek Bok Center for Teaching and Learning. Moss’ works have also been presented internationally. In Korea his collaboration with Yoon Jin Kim, Kisaeng becomes you was presented in the 2008 Seoul International Dance Festival; and his collaboration with the visual artist Sungmyung Chun, Nameless forest, was presented in 2011 at The Bitgoeul Citizen Cultural Center, in Gwangju. His last premiere, johnbrown, was commissioned by the New York Museum of Modern Art. His current project, Petra, was commissioned by Performance Space 122, and will premiere in January 2018.

Cenk Ergün is a composer and improviser based in New York. His chamber music has been performed by artists such as So Percussion, The JACK Quartet, Alarm Will Sound, Wet Ink, Yarn/Wire, Ensemble Laboratorium, and Joan Jeanrenaud. He also creates electronic music recordings and live performances in collaboration with choreographers, filmmakers, and other musicians such as Alvin Curran and Jason Treuting. Venues that have featured Ergün's music include New York's Carnegie Hall, Lincoln Center, 92Y, Le Poisson Rouge, The Roulette, The Stone, Amsterdam's Muziekgebouw, Zurich's Tonhalle, and Istanbul's Babylon. Some events Ergün has participated in are the NY Phil Biennial, Lincoln Center Festival, Gaudeamus Music Week, MATA Festival, Bang on a Can Marathon, WNYC New Sounds Live, Peak Performances at Montclair University, Stanford Lively Arts, and the San Francisco Electronic Music Festival. His first solo composition record, Nana, was released in 2014 on Carrier Records. Other releases include The Art Of The Fluke with Alvin Curran and So Percussion's Cage 100 Bootleg Series. Ergün's music has been described as "intense," "haunting," "ominously throbbing" (NY Times), "psychedelically meditative" (New Music Box), and as showing "conceptual rigor" (The Wire).