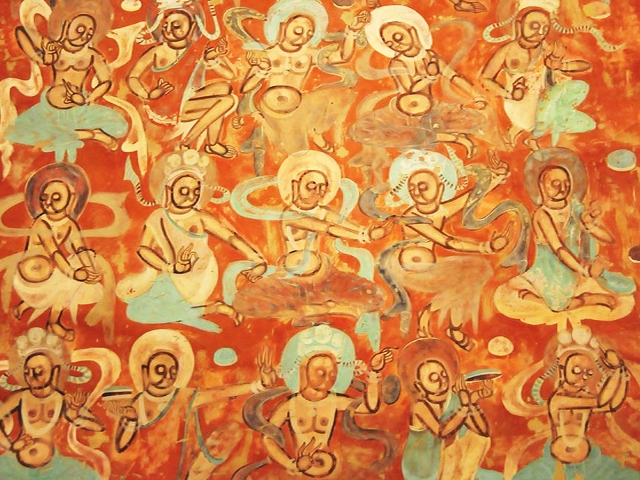 Overview:
The Eurasian trade routes known as the Silk Roads encompassed a diversity of cultures embracing numerous religions and worldviews from Venice, Italy to Heian, Japan.  Between these two ends, belief systems that are represented are Buddhism, Confucianism, Christianity, Hinduism, Islam, Judaism, Shinto, and Daoism.  During the height of the Silk Road trades in the 7th century, Islam, Buddhism, and Nestorian Christianity were the most important.  This activity asks students to reflect on similarities and differences between belief systems.  Using quotations from translations of religious texts, students are asked to organize these quotations into broad categories of essential concerns. Although not a religion, the philosophical writings of Confucius are included because it is one of the major belief systems that flourished along the Silk Roads.  The quotations will be posted on a silk routes map as reminders of how cultural interchange and belief systems are represented in the ancient and contemporary world.

Materials:
•    Student handout, Quotation Master (one copy cut into individual quotations).  Most of the quotations are taken from translations in World Scripture: A Comparative Anthology of Sacred Texts, published by the International Religious Foundation (New York: Paragon House, 1991).
•    Map of Asia and Europe showing the Silk Roads
•    String
•    Tacks
•    Category signs--make one of each using colorful construction paper or computer print-outs:

1.  Photocopy the Quotation Master and cut individual quotations into strips.

2.  Post headings at stations around the classroom that identifying each thematic category (Prayer and Worship, Good and Evil, The Golden Rule of Reciprocity, Blessings and Love, Compassion and Tolerance; Creation, Life after Death).

3.  Have students generate a list of the names and sacred and philosophical texts of the belief systems of the Silk Roads as a review activity.

4.  Point out stations and the headings to students.  Remind students that these categories are general characteristics that are addressed by most belief systems in the world.

5.  Give a slip of paper with a quotation to a pair of students.  Have students read and identify which of the posted categories their quotation should be listed under.  Students may be more confident in analysis with the support of another class member.  While the quotations are grouped for convenience under these headings in the Quotations Master, other groupings may also be appropriate.  Students should be encouraged to decipher both meaning of the text and develop logical reasoning to appropriately place the quotations in any of the headings.  Students may also be encouraged to suggest additional thematic categories.

6.  Each pair of students should move to the station with which they associate their quotation.  When all students have chosen a station, have students take turns reading their quotes aloud, explaining briefly why they felt this grouping was appropriate.

7.  As students have read and explained their choices, have students post their quotation by tacking them on a map of the Asian and European continent with the Silk Road routes clearly marked.  Use a string to reach from the quotation to an area along the Silk Roads indicating where these belief systems flourished.

8.  When all groups have read and posted the quotations, use the discussion questions below to reflect on similarity and differences noted by the students.

Were there quotations that could have been placed in more than one category?  How might this be a reflection of the interpretations, languages, and complexity of the belief systems?

Can you offer examples where various systems seemed to hold similar views?

Can you offer examples where systems held different views?

Is it possible to reconcile some of the differences based on your knowledge of the systems?

Can you anticipate areas that might cause dissension among members of various systems, based on your knowledge and the reflections in the quotations?

How are the categories reflective of universal concerns of religions and belief systems?  What other categories might be included?

Can you name other belief systems from the Silk Roads that are not represented in these quotations?

For a balanced and historically accurate presentation, it is important for students to understand that while many religions share points in common concerning morality and ethics, they often differ in important ways in articles of belief -- including the nature and attributes of God (or gods), the obligations of faith and practice placed upon believers, etc.  Some religions insist that members of a particular religion renounce belief in all others. Thus while most belief systems offer many potential areas of common ground to people of different faiths and traditions, religion can be used as an justification for disagreement and conflict as well.

Have students choose one of the quotations as the basis of a journal reflection.

Have students formulate additional categories and find representations of several belief systems to be grouped together.

Have student write their own quotation to be included in each of the categories listed.