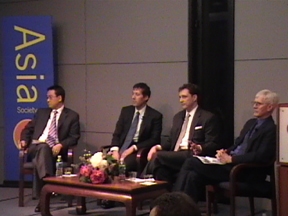 NEW YORK - Rapidly extending its reach around the globe, China has benefited from its international standing through a soft power campaign focused on diplomatic, business, and cultural leadership. In turn, many questions have been raised about China's future role in Asia and the world.

With China expanding its influence abroad through aid, infrastructure development, and a desire to be perceived as a champion of developing nations in the international financial and political systems, has it succeeded in extending its ability to attract and persuade?

What conditions have enabled China's soft power to emerge globally as a viable alternative to the West? How much of China's soft power success is a result of having a cultural and historical "brand China," and how much is contingent upon China's economic success and ability to maintain domestic stability? Do China's natural resource investments help the economies in which they are being made, or are they merely a form of neo-colonialism?

To explore the answers to these questions, Asia Society hosted a discussion with four distinguished experts in the inaugural program of a new series, "China's Rise," that looks at China's growing influence around the world.