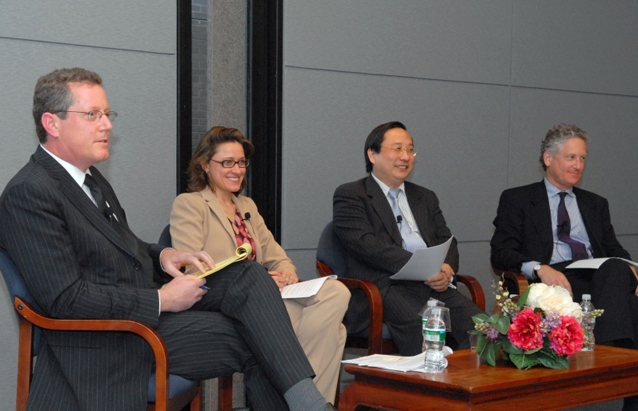 NEW YORK - In its effort to secure oil and other resources, China has set its sights on Africa, increasingly attracting the world’s attention. While state-owned companies sought out exploration and supply contracts, Beijing courted African governments with trade, investment, debt reduction, and aid packages.  There are strongly divergent viewpoints on how this economic diplomacy has impacted China’s efforts to promote a positive image abroad, and what the overall impact of China’s strategy has been on the African continent.

On May 5, three experts came to the Asia Society to share their thoughts on this issue. With a range of both complementary and opposing viewpoints, one thing was certain: the effects of China’s Africa strategy are not black and white.

Stephanie Kleine-Ahlbrandt, China and North East Asia project director at the International Crisis Group, noted that China’s role could be both positive and negative in Africa, but that “China’s investment puts the ball in Africa’s court”; in other words, it is up to African leaders and corporations to take proper advantage of China’s capital and resources.  Harry Broadman, economic adviser for the Africa Region at the World Bank, concurred, admitting that a lack of national leadership in Africa made it difficult to take advantage of China’s unconditional investment strategy.  Victor Gao, director of the China National Association of International Studies and a former vice president at the CNOOC, was more defensive of China’s investments and position of non-interference.  At one point, he noted that the CNOOC had not invested in Africa until the Unicom deal was derailed by US protectionism, complaining that the West cannot “have your cake and eat it too.”

Despite differences in the overall effect of China’s investment, there was consensus that China’s approach to investment—unconditional, and frequently including human capital training, infrastructure development, and worker benefits—had successfully wooed African corporations and governments. However, China may have to transform its strategy as Africa develops a stronger consumer culture and civil society.

Excerpt: Why is China grateful to African nations? (5 min., 43 sec.)
Victor Gao discusses China’s relationship with Africa over the past 50 years, the country's indebtedness to Africa in the diplomatic realm, particularly regarding African support of China in the UN, and how this has furthered the relationship.