Tang Dynasty Poems: The Facebook of the 7th Century

A Lesson Plan for the Ages

It can be a stretch to draw parallels between historical teachings and the present day, but such a discovery is often the very thing needed to spark engagement in a classroom. When I was invited to talk about the civil service exams and Tang Dynasty poetry to a class of seventh graders, I consulted my go-to text, An Anthology of Chinese Literature, Beginnings to 1911, edited and translated by Stephen Owen. I became re-acquainted with the term “occasional poetry” as a descriptor for much of the poetry written during the Tang. By “occasional,” of course, it is meant that the poems were written for a specific occasion. These occasions break down into several categories with two of particular relevance here, namely: poems written by men to other men who were leaving on a journey (parting poems), and poems written by men who had come to visit other men who were not, alas, at home (“Sorry to Have Missed You”). Of these two categories, the latter provided the hook across the ages to the 21st-century American middle school student. Here’s how my thoughts ran: These poems were often posted somewhere so the recipients would find them. Somewhere like, say, a wall. A wall. The wall. Posting to the wall. Holy Facebook, Batman!

And thus I created a fun—and funny—approach to teaching about Tang poetry, one that has enjoyed some success and resulted in some very amusing Tang-style poems written by middle school students in Lawrence, Kansas. 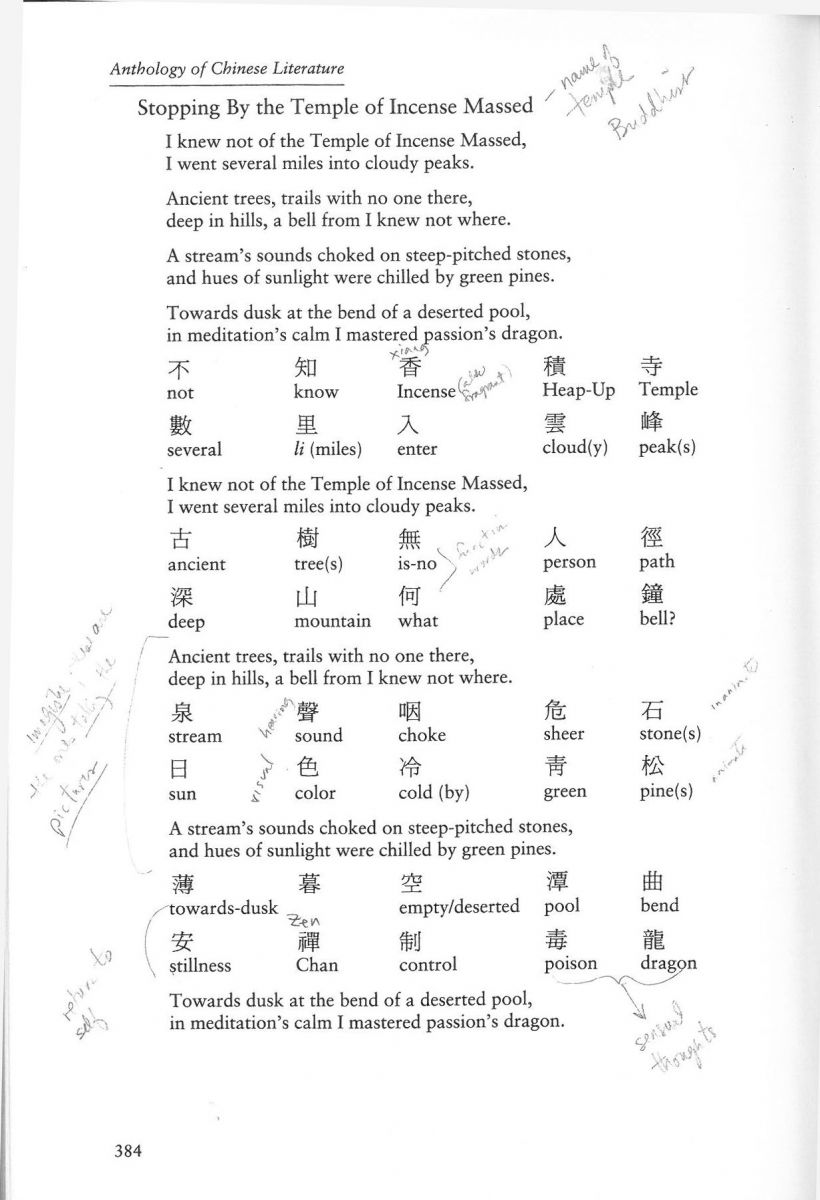 My teaching procedure looks something like this: After a brief class discussion of some of the major aspects of the Tang Dynasty—art, poetry, the civil service exam, the Empress Wu, and so forth (images optional)—I distribute copies of a couple of Tang occasional poems: Jia Dao’s “Looking for the Recluse and Not Finding Him Home” and Wang Wei’s “Sending Mr. Yuan on His Way on a Mission to An-xi.” The students and I read them aloud and explore certain tropes: the way the poets used dust to symbolize the city where life was “dirty” and “impure,” the bell as a symbol for a Buddhist temple, the reverence for a simple country life, and the reverence for recluses. I also give students an overview of Chinese tones, couplets, internal rhyme, and the parallelism of characters—that is, the pairing of parts of speech and tone harmony in Tang poetry. We read “Stopping by the Temple of Incense Massed” as a poem that exemplifies many of these conventions. The poem is presented in translation, and with Chinese characters and a word-for-word literal translation so students can see the Chinese syntax, the economy of the Chinese language, and a handful of Chinese characters.

Finally, I give them a look at some of the more convoluted and humorous titles of Tang occasional poems from the “Sorry to Have Missed You” category: “Going to Visit Censor Wang on My Day Off and Not Finding Him Home;” “Walking in the Hills and Looking for the Recluse, But Finding Him Not In;” “Spending the Night in Reverend Ye’s Mountain Chamber. I was expecting the senior Mr. Ding, but he did not come;” “Answering the Poem Left by Mr. Su, Nominally of the Bureau of Forestry, When He Stopped by My Villa at Lan-tian.”

At this point, we talk about how these notes were updates on whereabouts, on likes and dislikes, on social status, and on relationships. Very much like Facebook. And then I give the students time to write their own occasional poem as if it were something they were going to post on their own wall. These are then read aloud to the class by volunteers. The results have not disappointed. Some examples of the students’ poetry:

Fishing for Gar, Catching None, but Seeing One
Cool autumn day, went fishing for gar.
Baited hook stays empty, no fish on.
Suddenly, a gar emerges from the water,
Looks at me,
Flashes a grin,
Disappears

Tired on a School Morning
I slowly shuffled through our crowded hallways.
Using much effort to merely sit down.
My arms lay dead on the desk
I tried too hard not to dream.

No One Added Me on Snapchat
So I’m feeling sad,
I wonder why I even created a snapchat to begin with
I shouted it out on my Instagram,
A screenshot, with my user name provided clearly,
The caption read, “yo, add my snapchat”
No one added my snapchat,
I cry.

When Your Friend Leaves You Hanging
I run down the halls of West Middle School
After a rigorous training in mathematics
I look up to see a familiar face walking in my direction
I suddenly am lifted to joy and raise my hand in a high-five formation
But my heart skips a beat as I see that he has not done the same
He passes me by with a simple “sup” and leaves me ashamed and dishonored.