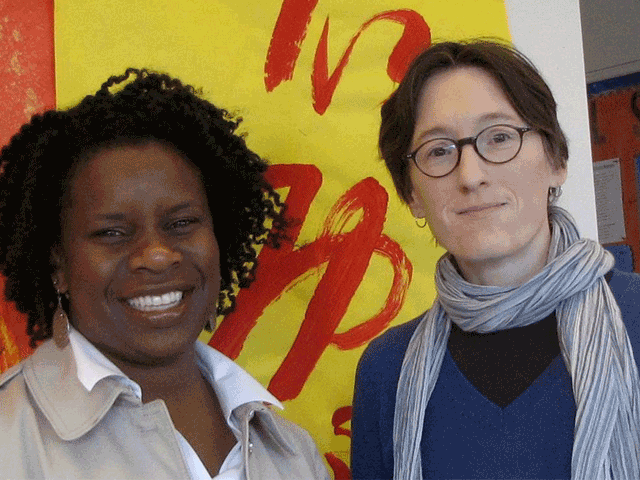 “Parents, wait here.” In China, it is not uncommon for this message to be posted outside school entrances. By contrast, U.S. schools, in part because of strains caused by shrinking budgets, have flung their doors open for parent volunteers. This, coupled with a culture that lauds exhaustive parent involvement in children’s lives, can leave Chinese teachers can feeling drained and unsure about how to help parents advance students’ education.

Elizabeth Weise, founding member of the Mandarin Immersion Parents Council, and Jamila Nightingale, founder and director of Parents of African American Students Studying Chinese, frequently speak to audiences of Chinese language teachers and administrators, and share strategies for winning the support of parents and communities.

Weise, who has two daughters enrolled in language immersion classes and is writing a book aimed at parents, explains that mothers and fathers who have been absorbed by every moment of their children’s lives are jolted when their children enter a Chinese language program. Suddenly, “a curtain has come across six hours of their kid’s day. It is a black box. And if you don’t tell them what is happening, they’ll imagine it.”

Weise urges teachers to appreciate parents’ different rationales for choosing Chinese immersion. Some parents she categorizes as “pioneers.” They enroll in fledgling programs and devote themselves to the program’s success. These parents, however, can be sensitive to criticism from latecomers with divergent agendas. Parents who are Chinese speakers, meanwhile, sometimes hold unrealistic expectations, wanting students to progress in tandem with native speakers. Others, whose children are of Chinese descent, hope immersion will rekindle linguistic and cultural ties, and advocate emphasizing Chinese American history. “21st-century parents” see immersion as a ticket for their children to ride China’s ascent in cultural, political, and economic spheres, and may downplay cultural competency. Lastly, there are parents who are not committed to Chinese at all, but reckon immersion will be academically rigorous.

Understanding expectations can help teachers target communication. “You want to fill in that black box,” recommends Weise. Meet weekly with a designated parent to preview upcoming activities so he or she can write an English newsletter for parents. Ask a parent who speaks Chinese to compile a list of age-appropriate websites, radio and television programs, and movies, and distribute to parents so they can actively augment their children’s education. Organize a parent workshop on how the Chinese language works, and seek the administration’s help in running interference with complaints. Weise acknowledges that teachers have limited time, but insists that investing in communication pays off.

Nightingale, whose daughters attend a language immersion pre-school, also advises frequent communications. After her daughter’s teacher e-mailed photos of children dressing up, accompanied with a notation that the class was learning about roles in the community, Nightingale pointed out firetrucks and police to her daughter outside of school. “Even though I’m not doing it in Chinese, I’m reinforcing it,” she explains, adding that she later discovered her daughter used Chinese to describe these encounters in class.

Honest discussions about how to faithfully investigate the spectrum of American experiences in the curriculum are also crucial. Creating opportunities to talk can unravel complicated issues, and provide forums for parents to share positive feedback, strengthening teacher-parent relationships. After all, observes, Nightingale, immersion itself is a cultural experiment, and fundamentally, “diversity is about relationships.”