The Foreign and the Familiar | Asia Society Skip to main content

The Foreign and the Familiar 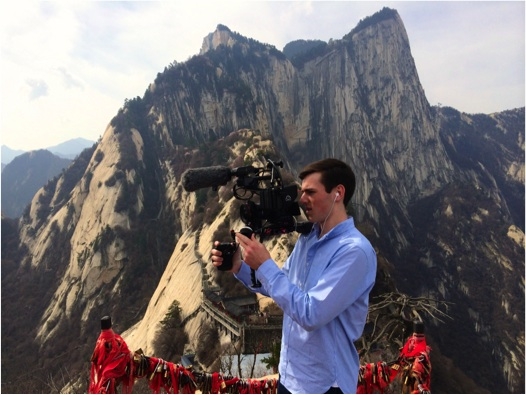 Breathless and shaking from anxiety, I stand face to face with a stoic, armed Chinese guard. Over his left shoulder, the imposing red Forbidden City of Beijing looms in the soft morning light. Separated from my group, I stand alone. Speaking in a language utterly foreign to me, a group of uniformed children pass by. I recognize nobody. I place my camera bag and tripod in front of an elaborate metal detector, unsure as to what will become of them. Lost and outside of my comfort zone, I grab my now authorized equipment and begin to sprint. Stride after stride, the controversial cobblestone of Tiananmen Square rejects the pounding of my aching feet. In the distance, I discern a red flag ruffling in the wind at the base of a flagpole. Focus, composition, exposure—I press the record button. As the red circle pulses on my screen, I quietly watch the uniformed color guard raise the crimson Chinese flag into a mustard‐colored sky.

At that moment, I realized this experience in China would have an enormous impact on me, shaping my identity and strengthening my passion for storytelling. Traveling to China was a journey like no other. For two weeks, I experienced life in urban settings, in cities filled with twenty million people whose culture was foreign to my own. Those fourteen days changed my view of the world. As I have experienced them, I believe cross-cultural exchanges are essential and offer learning opportunities to students that are real and personal. As a filmmaker and a storyteller, my goal was to capture key moments and to create a film that would explain the importance of cultural exchange in order to help viewers develop a deeper understanding and acceptance of one another. By recognizing the foreign and the familiar, my documentary showcases that the differences between societies are many, but they share more similarities.

By articulating what I’ve learned from the process of making a documentary about a foreign culture, I hope to encourage other students to experience this life-altering opportunity and to document and share their own experiences. (Links to the documentary can be found at the end of this piece.)

Backstory (How the Project Came to Be)
During my freshman year at Lake Forest High School, I applied for the Lake Forest High School– ErFuZhong (LFHS‐EFZ) Cultural Exchange program in hopes of exploring a foreign culture with a camera in hand. I was thrilled to be accepted from a large applicant pool into the two-way exchange program. In the fall of 2013, twelve Chinese students from our Chinese partner school visited us and we hosted them in our homes. Then, in the spring of 2014, eleven other Lake Forest High School students and I traveled to China. I used this opportunity to create a two-part documentary film about the benefits of cross-cultural learning.

Have an Idea of Why You're Going (Don't Act Like a Tourist)
Before I boarded the plane to China, I must have spent countless hours preparing, preparing, and preparing. China has been a huge part of my studies, particularly in history. During my freshman year, our class spent a month covering the details of China's 5,000-year-old history. Traveling to China during high school put all of this academic knowledge into context. As a filmmaker, I traveled to China with a specific purpose in mind: I dedicated every moment there to understand and capture the culture.

Story Stands Above All (Compel the Viewer to Watch)
The most important aspect of successful filmmaking is a compelling story that grabs your audience, invites them to question, and provides a unique perspective. A strong narrative accomplishes these three goals. During the filmmaking process, I was constantly thinking about the outlined story and the best ways to communicate 21st-century learning, two‐way communication, and cross‐cultural understanding. At the same time, I had to be flexible enough to change my narrative when I discovered new material through my lens. As the filmmaking process evolved, the story took new forms. I learned quickly that all documentarians need to be able to adapt.

Find the Familiar in the Foreign (Not Everything There Is on a Map)
It's important to recognize that while 7,000 miles separate the United States and China, the two cultures share similarities on top of dramatic differences. The themes of 21st-century learning and two-way communication were consistent regardless of the country. I learned that the sheer size of cities like Shanghai is remarkably different from America's largest cities. Shanghai's 25 million citizens are connected in more ways than I had imagined. I observed and learned that Chinese students were as focused on their futures as I am about mine. And while both Chinese and American teenagers enjoy food, I was not as prepared for some very unfamiliar foods like chicken feet and turtle jelly.

Editing (Squeezing 11 Hours into 10 Minutes)
Reducing eleven hours of footage into ten minutes was no easy task. When I returned home, I faced the daunting task of compressing, squeezing, and crafting the footage into a ten-minute documentary. During the editing process, I had to painstakingly remove 97% of my shot material. As an aspiring cinematographer, I found myself emotionally attached to a number of shots that ended up on the cutting room floor. To be a successful editor, I had to learn to step away from myself and look at my material with a critical eye. This cinematic lesson will carry over into my next four years at the University of Southern California and make me a more successful communicator, filmmaker, and student.

Reflection and Final Product
Participating in an initiative of cross-cultural learning helped close the distance between two remote locations. My experiences in China brought new perspective to what I do behind the camera. I now reconsider the way I approach the world in a larger sense as well as my responsibilities in the classroom on a more narrow level. Through the hours spent on the documentary, I learned the values of patience and dedication, and I am now able to manage problems that seemed overwhelming in a much more seamless fashion. I've come to realize that each individual has an important part to play in our interdependent world. My experience in creating this documentary encourages me to appreciate every day and keeps me grateful, responsive, and sensitive to what is happening in our world. Below are links to my documentary.

The Foreign and the Familiar: Part I

The Foreign and the Familiar: Part II