Flagship Participants Find Their Voice (and Future) in Chinese 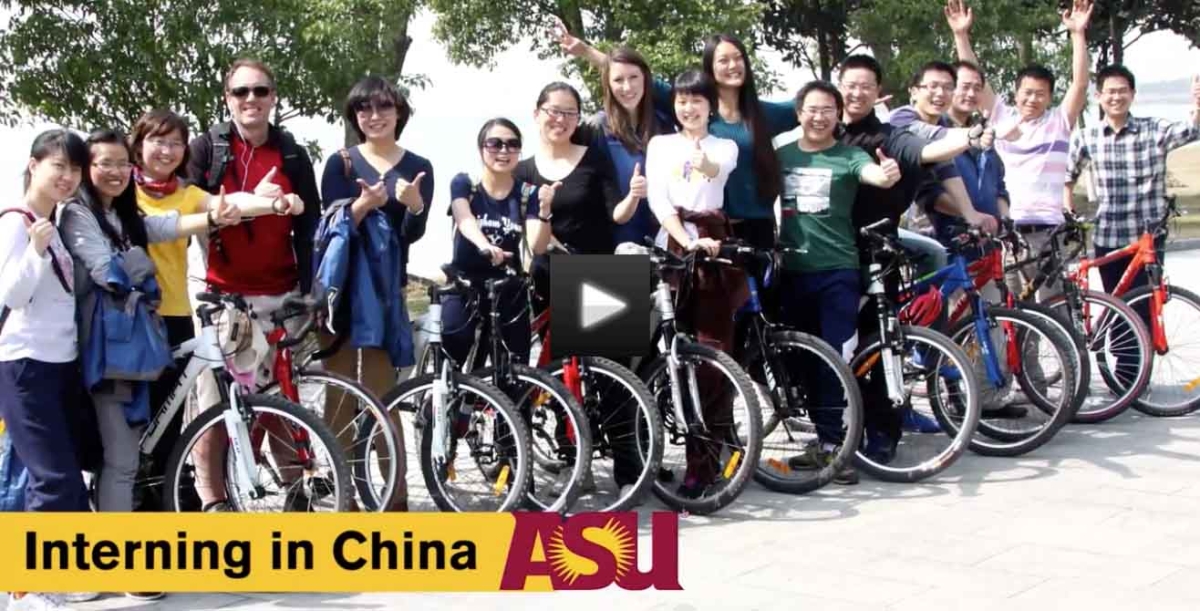 The success of early language immersion raises a question about those who begin studying Chinese in college: Have they missed the boat when it comes to language mastery? Students and recent graduates of the Chinese Language Flagship Program (Flagship) at Arizona State University (ASU) give a definitive answer: Attaining a superior level of Chinese in four years is feasible. In addition, the Flagship model significantly affects the course of students’ lives as they step into their careers.

Recently Madeline K. Spring, at the time professor of Chinese and director of Flagship at ASU, brought together four participants to share their journeys. They described how the program consistently helped them attain linguistic proficiency and cultural competence, while accommodating their divergent experiences, interests, and aspirations.

The pathways that led the students to the program were distinct. Emma Kaz Frick, a junior, had a dream of learning Chinese after participating in a high school youth ambassador exchange in Chengdu. Zachary Marin, currently a senior with a double major in genetics and Chinese, felt it was destiny that seated him next to Professor Spring who advised him to make himself unique by learning Chinese. “From the first day, I fell in love with it,” recalls Marin.

Marilyn Li, who recently graduated with a degree in economics and a certificate in international business, learned Chinese as a child, but she found her love of the language in music. “I listened to a lot of Chinese music and that (memorizing lyrics) is where I learned the majority of my characters.” Meanwhile, Jason Loose, a 2012 graduate, became curious about modern-day China in high school after reading Peter Hessler’s River Town and Rob Gifford’s China Road.

Professor Spring, who now serves as professor of Chinese and director of the Chinese Language Flagship at University of Hawai’i at Manoa, explained that when students enter Flagship, they follow a cross-disciplinary trajectory that includes studies at Nanjing University or Tianjin Normal University in China, and culminates with a structured, in-country internship. “Flagship involves a team approach, “ said Professor Spring, summing up what sets the program apart. “These are our students for four to five years, and we really get to see them mature and develop both linguistic skills and cultural awareness during the time they are in Flagship.”

Throughout the program, students receive weekly tutoring, frequent assessments, and extensive networking opportunities, as well as funding for summer programs and a capstone year.

While the milestones for these students have been the same, their experiences have been diverse. Kaz Frick has studied international relations in Qingdao and Shanghai. Marin’s trips to China emphasized practical language, and involved teaching at a rural school and giving a presentation at an international language conference. He also completed an Honor’s thesis that focused on the translation of a Taiwanese scholar’s work on Daoist transcendent journeys.

Li attended Nanjing University in 2012, taking classes in international monetary economics alongside Chinese graduate students, and writing four thesis papers of at least 7,000 characters. For her internship, she served as an accounting intern at a toilet paper factory in rural Sichuan and also wrote an honor’s thesis on the economic effects of social media.

Loose, meanwhile, says he sensed Flagship was different from the moment he started. “It was less about the grades and information, and more about the skills and the perspectives and the relationships.” This realization deepened during his term at Nanjing University. He forged lasting friendships and connected to people in the community, including a homeless woman he befriended outside of a McDonalds, an incident that was photographed and posted online. It went viral and “French-Fry Brother” found himself unexpectedly handling a media spotlight.

Kaz Frick, Marin, Li, and Loose are part of a growing program. Launched in 2007 with eight participants, ASU’s Flagship now has 80 students, and is only one of 26 programs (twelve of which offer Chinese) funded by the National Security Education Program. In addition to the goal of attaining superior levels of language proficiency, Flagship compels students to become independent learners and thinkers, and this is apparent as the four ASU participants speak about their future plans.

Kaz Frick is majoring in Chinese and Political Science and would like to strengthen the relationship between the United States and China. Marin left for Nanjing University in the autumn of 2014. His internship is focusing on strategic consulting, but he also hopes to pursue his interest in Chinese ethnic music. “Chinese wasn’t on my radar three and a half years ago, but now it’s my life,” he said.

Looking back on her experiences, Li reflected: “Now I can say I can adapt to any situation.” She graduated in May of 2014 and started law school at New York University law school the following autumn.

Loose has become a high school teacher of math and Chinese in Thousand Oaks, California. Yet, even for him, the journey is just beginning. Speaking about having his own students, he commented, “I’m really excited to be a part of their learning process and to have my own learning process continue.”

Other Articles By Heather Clydesdale