This bilingual rap humorously takes a closer look at specific features that have shaped China’s development from the Qing Dynasty to the Bling Dynasty. Jesse focuses on the word 发展 (fāzhǎn) because of its importance to everyday life: when you’re in in China, it’s a word that comes up all the time in all kinds of situations. Anyone interested in China should make sure they are fully aware of the meaning 发展 carries in any conversation about China’s past, present, or future.

This episode covers many aspects of 发展, but to really understand the concept, we’ll have to delve more deeply into development itself, into Deng Xiaoping’s involvement, and into the concept of “socialism with Chinese characteristics”.

"发展 [is] described in the dictionary as 'development'. I define it as: everything that’s nutty about China….There are these good things and these bad things, and it's all tied up in 'development'….[T]here's this crazy traffic in Beijing, but...thirty years ago there were no cars in Beijing."

China has gone through incredibly large-scale, rapid changes over the past thirty-plus years, so while 发展 is not a new word, it has become more of a buzzword since the 改革开放（gǎigé kāifàng, the reform and opening-up of China). This period began in 1978 when Deng Xiaoping came to power and made some bold changes to the economic landscape that are seen as a starting point for China’s current economic boom.

China’s yearly Gross Domestic Product (GDP) skyrocketed after the 改革开放. The graph below (data from the World Bank) illustrates China’s GDP from 1960 to 2013. China's 2014 GDP came in above 10 trillion US Dollars, the world's second largest economy—which is insane when you see that it had only 1.5% of that GDP back in 1978. 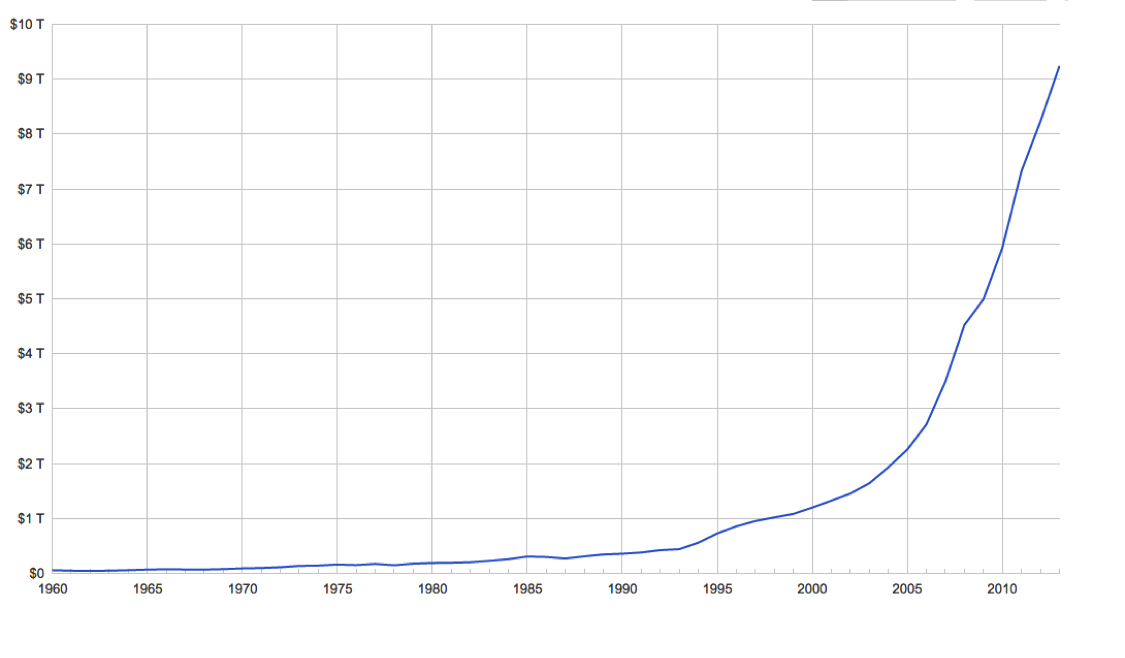 This episode also deals with the fact that so much development has also led to serious levels of economic inequality. In 2013, the World Bank predicted that extreme poverty in China would be virtually eliminated by 2022, but inequality is still rife throughout the country. Urban areas are a different world from rural areas, and income can also be affected if working inland as opposed to coastal. To highlight this divide, think about this: in 2009, people in cities made over three times as much as those in rural areas, with urban income at 17,175 RMB (about $2500), versus a per capita rural income of 5,153 RMB (about $750). Furthermore, those in coastal rural areas saw income more than triple between 1989 and 2004, while people in inland rural areas only doubled their income in the same period.

Shanghai, which is both urban and coastal, is a great example of this amazing economic development. Because of its location, it was chosen as the economic powerhouse of the country, so it developed incredibly rapidly. Check out these pictures from The Atlantic that show the stunning transformation and growth of Shanghai between 1987 and 2013.

Shanghai is just one example of how 发展 has changed the country’s landscape and people’s lives. There are similar stories throughout China to varying degrees. This slideshow from Foreign Policy looks at 发展 in the inland city of Chongqing. This 2012 article in The Guardian visualizes the change in the economy between 1980 and 2012. Click here for a satellite time-lapse of Shanghai 1984 to 2012, Or, read this 2008 article predicting the path of China's economy through 2025.

Who is Deng Xiaoping?

In terms of past leaders, Mao may be highly respected, but it is Deng who led the country into its era of economic success. Deng was initially a staunch supporter of Mao, but his ideas about how to economically develop the country were at odds with Maoist ideology. He was “purged” from the government twice, but Deng regained political power and became paramount leader of China in 1978, not long after Mao’s death.

Deng implemented the Four Modernizations: modernizing the fields of agriculture, industry, national defense, and science and technology, thus making China more economically self-reliant. He emphasized modernization and openness to the rest of the world, decollectivizing agriculture and building international relationships. He set ambitious goals for the country, such as quadrupling GDP between 1981 and the end of the century—a goal that was surpassed by the mid-1990s.

Even after his retirement in 1992, Deng pushed on with his mission. He went on his now famous "southern tour" to Guangzhou, Shenzhen, Zhuhai, and Shanghai, where he promoted his 经济计划. At the time, his ideas faced criticism from detractors in the government who didn’t believe in 发展 through Deng’s methods. But Deng’s tour was enthusiastically received by locals on the ground, leading to a media storm of positive coverage for his reforms. Deng died in 1997 but his 改革开放 was the beginning of the economic upswing that still powers the country today.

Deng Xiaoping’s life was incredibly interesting. To find out more about some of the incredible experiences he had, check out this Encyclopedia Britannica piece. Read this article suggesting Deng's foreign policies should still be followed today. Watch this video to get a sense of Deng's style and rhetoric, in his interview with CBS's Mike Wallace, who was deeply impressed by the leader. If you’re learning Chinese and want to challenge yourself, watch this amazing footage of Deng inspecting various workplaces on his Southern Tour.

What is "socialism with Chinese characteristics"?

发展 has no doubt brought a lot of good to China but the economic inequality that resulted has also brought a lot of criticism. Many see the “reforms” essentially as capitalism by another name. A big part of the Communist Party’s rhetoric had been anti-capitalist, so reforms in the direction of a more capitalist market weren’t well-received by believers in the socialist direction of the People’s Republic of China.

A lot of people are asking: what does it mean for the legitimacy of the Communist Party of China (CPC) that they seem to have abandoned a socialist path?

How does the government respond to this? They say that China has not abandoned socialism at all, but has rather adapted it to suit the current Chinese situation. They call it “socialism with Chinese characteristics”. Basically, according to this view, socialism is a mountain that must be climbed in stages. The Chinese government has asserted that to reach that peak, attaining true socialism, there must first be a base amount of material wealth.

For more detail on the concept, read this excerpt from a speech by Deng Xiaoping, where he explains this brand of socialism, stating that "pauperism is not socialism," often translated as "poverty is not socialism."

I hope that you found this post valuable and informative, and that you now have a deeper understanding of the concept of 发展. The role it plays in a modern understanding of Chinese governance, of CPC ideology, of Chinese history and society as a whole, is truly ubiquitous. Please share it with anyone who you think would find it interesting: friends, family, teachers, students! More posts are forthcoming as we dive deeper into the immensity and many complexities of China.