Each episode is accompanied by a blog post which examines various elements mentioned in the video at a deeper level and draws connections to the world we live in today. The following blog post is by Kiril Bolotnikov, student at New York University Shanghai, and features photos taken by Kadallah Burrowes, student of NYU Shanghai.

This parody of a famous Chinese song raises 串儿 (chuànr) as a funny-but-actually-serious example of inflation in China in the past few years. Inflation seems to have affected everything, even street food that is traditionally incredibly cheap. There is certainly humor to his complaints, though: although one could point to 100% increases in price, or to the price doubling, both of which sound drastic, the reality is that the price has increased from 1 RMB (about $0.16) to 2 RMB ($0.32). Inflation or no, 串儿 remains an important part of the lives of many who live in China, local or international visitor regardless.

串儿 is a popular street food: small pieces of meat on skewer usually cooked over charcoal, sort of similar to Middle Eastern kebab or Southeast Asian satay. It originated as a part of the Chinese Muslim cuisine. As such as it is referred to in China as a type of 清真菜, (Qīngzhēn cài, literally “Muslim” or “halal” food) or 回族菜 (Huízú cài, referring to it as “Hui ethnicity food”; the Hui people are the most populous of China’s several primarily-Muslim ethnic groups, so this is something of a generalization of all Muslim food). However, despite its origins, it may be just as common to see non-Muslim vendors as Muslim ones.

Despite its origins, 串儿 has spread all over China and is a popular street food in many large cities. Street sellers have long narrow grills over hot coals or charcoal… 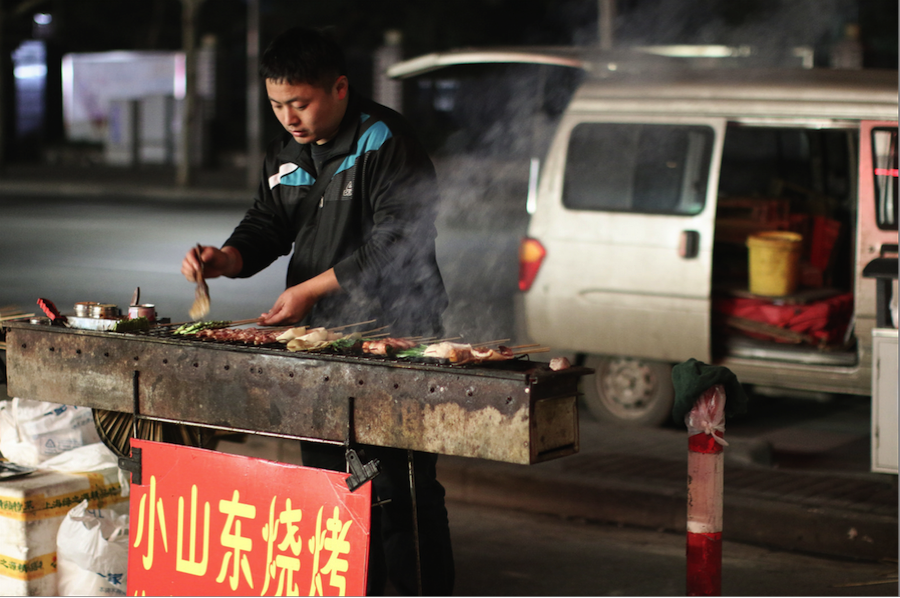 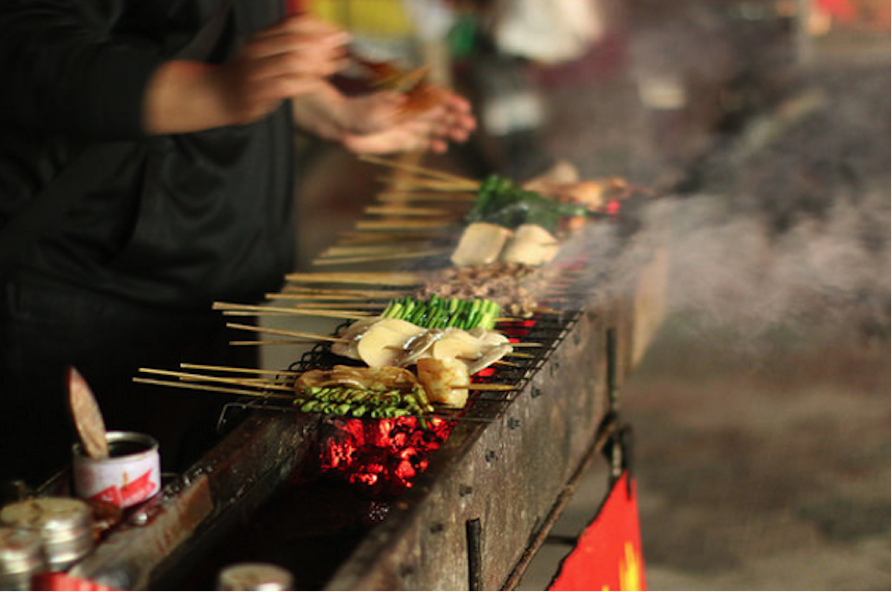 …and a large table to one side filled with meat, vegetables, and various other foods to be grilled. 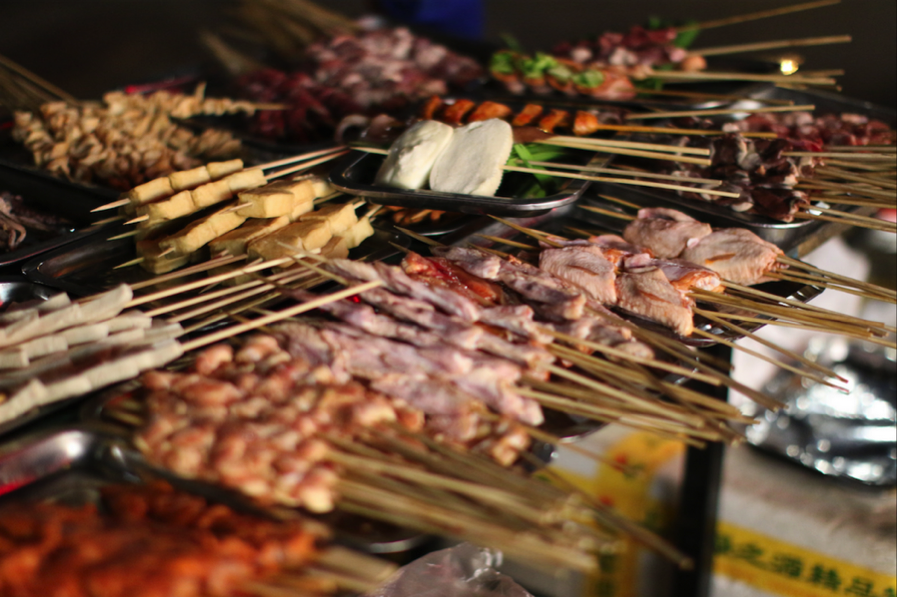 Customers grab a metal plate or tray and fill it with whatever they want to eat before handing it to the seller. By some witchcraft, I’ve never seen a 串儿 seller get an order wrong, no matter how much they seem to mix and match different people’s orders on the actual grill, and despite the fact that they never write anything down. Vendors will come and find you, or call you over and hand you all your skewers in a styrofoam package. 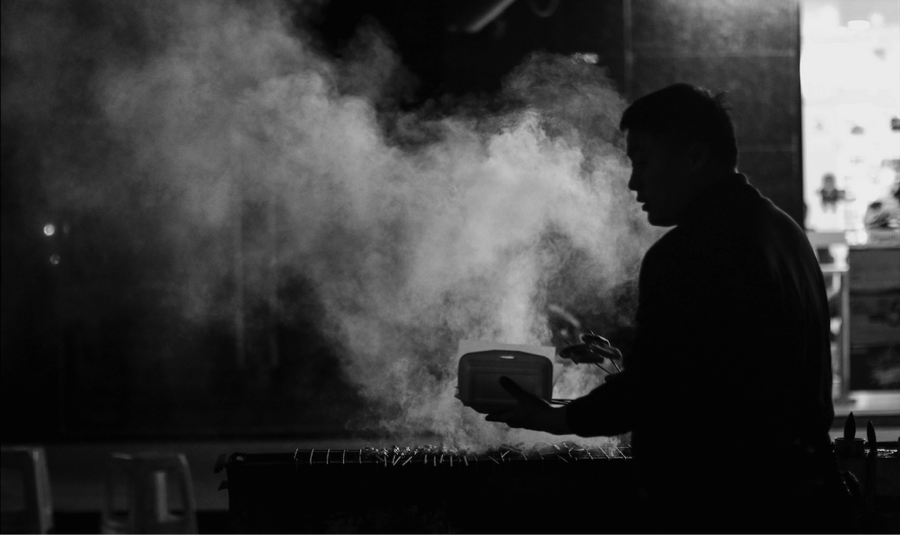 Vendors of 串儿 do not live easy lives, as detailed in this article by a classmate of mine, in which he interviews the “chuan lady” who set up shop in front of the convenience store close to our dormitories every night.

串儿 has been an integral part of my experience of going to college in China, and it has been for many others as well. Many a student studying away in China would be able to write an ode or three to this seminal street meat. The vendors only come out after dark, so they’re there if you are coming back late from a bar, or getting hungry while doing homework at one (or three or four) in the morning. There is a kind of comforting feeling, when you’re brand new to China, that the 串儿 people will be there every night, rain or shine (though I’m not sure about holidays, I guess). I’ve actually known people who eat street food for dinner every night (besides, where there is 串儿, there is often also a fried rice and noodle cart).

In Shanghai, at least, finding a vendor is usually as easy as walking a few blocks in any direction. I have passed by the telltale smell (smoke and meat) of 串儿 even in what seem to be incredibly remote parts of the city.

Are there drawbacks to 串儿?

If you read the interview linked above, you may have noticed “chuan lady’s” mention of the police. The fact is that most street food is—strictly speaking—completely illegal, outside of certain snack streets or areas. There is an ongoing debate about the legalization of these street vendors, which are unregulated, posing potential risks to hygiene and health. In 2013, Beijing authorities started confiscating these “street barbecues” en masse, which, according to the same article, drew some ridicule from Beijing residents. Regardless, the city government raised the fine for running a 串儿 stand from 5,000 to 20,000 RMB (approximately 800 to 3175 USD).

However, China’s Global Times makes it clear that there is a real worry in regards to 串儿 vendors’ contribution to city pollution, especially in Beijing: a researcher at the Chinese Academy of Sciences is quoted saying that 13% of the PM2.5 particles (which are the ones by which pollution levels are generally measured) in Beijing were from cooking emissions. The 2013 crackdown came in the wake of international reporting on some of Beijing’s worst-ever pollution. Also, because of the lack of the regulation, the immediate area in which customers are sitting and eating, or where the vendor is cooking, are not the cleanest.

That said, 串儿 is an important part of Chinese culture nowadays: it’s so popular with locals and visitors alike that getting rid of street food does not seem to be the answer, and in fact would be a huge shame as far as I and many others are concerned. Regulation of the 串儿 vendors may be an answer to the mess that each barbecue leaves behind, but confiscation and fining seem aggressive and unnecessary ways to target people who have taken years to carve out a niche for themselves as a way to make a living.

In the spring of 2014, I was walking back home from dinner down a backstreet when I suddenly saw a large crowd of people surrounding a young man who was obviously very distressed, yelling and struggling. Not being fluent in Chinese, I didn’t understand what was going on; I thought it was a fight, and prepared to steer clear. Then I saw the man’s barbecue being tossed onto the back of a truck parked at the end of the street. The crowd, it seemed, was holding him back from engaging with the confiscators. Another vendor, affectionately known to us as “noodle lady,” broke away from the crowd as the truck started driving away, and I realized all her food and equipment had been taken as well.

I was worried when I didn’t see either vendor the next day, or the day after that; but they reappeared with new equipment within a week. If it’s so easy to get new equipment and set up shop again, it seems that confiscation does very little to discourage people who have made 串儿 their livelihood. Which, to many, is a very good thing; if the loss of the “one-kuai 串儿” is already sad, how heartbreaking would the loss of 串儿 altogether be?

Please share this article with anyone who you think would find it interesting: friends, family, teachers, students! More posts are forthcoming as we dive deeper into the immensity and many complexities of China.