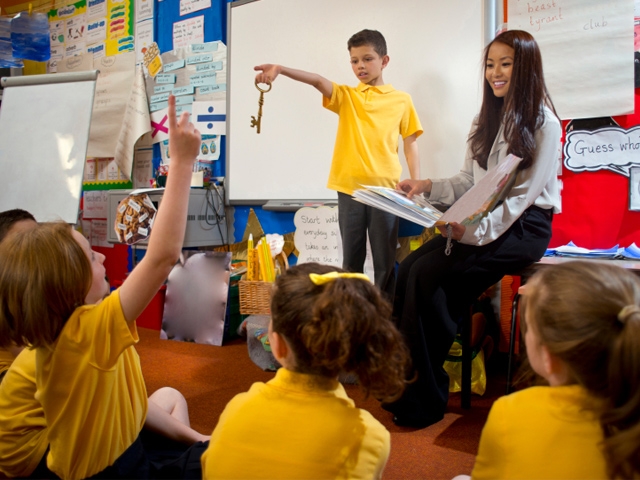 At the 2013 National Chinese Language Conference, Shuhan Wang, Ph.D, president of ELE Consulting International, assembled a team of administrators and teachers who have successfully created Chinese immersion programs. In a workshop setting, she asked them to share their experiences and map the sometimes bewildering terrain that educators and administers must traverse for immersion initiatives to take root and thrive. Their discussion yielded helpful insights, and led to the launching of a new network, the Chinese Early Language Immersion Network at Asia Society (CELIN).

“The interest in immersion education is really growing,” says Wang. Immersion programs, in which at least 50% of school activities are conducted in the target language, leverage the natural abilities of children to acquire new languages. Studies also show that immersion students’ academic performance exceeds that of their peers across all subject areas over the long term. While the advantages are clear, Wang’s workshop team cautioned that the path from inception to realization is not straightforward.

“It’s a huge learning curve with lots of peaks and valleys,” admits Sue Berg, executive director of Yinghua Academy in Minneapolis, which has grown from 76 students to over 500 in seven years. She highlighted one challenge: since learning across subject areas depends on language proficiency, by second grade new students can no longer laterally enter the program. Berg explains that attempts to do so are “disastrous,” an appraisal that was echoed by her co-presenter, Maquita Alexander, head of Washington Yu Ying Charter School in Washington D.C. The most common solution is to start programs in pre-school or kindergarten, and add successive grades each year. As additional teachers are needed, administrators should anticipate additional considerations.

Public schools must follow state certification requirements, while charter and independent schools may have an easier time finding qualified teachers with advanced degrees. When starting out, Berg suggests tapping guest teacher programs run by the College Board, Hanban, and the U.S. State Department. These programs often only allow teachers to reside in the United States temporarily, however, and sustainable initiatives need long-term staffing strategies. Alexander is emphatic that administrators must invest in their teachers by tackling visa issues head on.

Her school helps teachers acquire H1B visas and, after three years of successful evaluations, sponsors them for green cards. In 2013, however, the U.S. government capped the total number of H1B visas, making them even more difficult to procure. Alexander nevertheless maintains, “When you think about the teachers being comfortable and staying on, it is something we (as a school) have to 100% take care of.”

Once an immersion program is running, support for teachers must be ongoing, according to Kathleen Wang and Kevin Chang. Pioneer Valley Chinese Immersion Charter School in Massachusetts, where Wang is principal, runs training sessions throughout the year, and pairs incoming teachers with veterans. Bilingual staff members facilitate both regular meetings as well as ad hoc discussions to address sensitive issues, while programs such as Second Step and Responsive Classroom assist Chinese teachers with classroom management. Chang, director of Chinese program at the Chinese American International School (CAIS) in San Francisco, California, agrees, noting that, “Preparing teachers is a long-term process.”

Chang advises administrators to be open-minded about integrating a Chinese teaching style in the classroom, saying teachers can flounder when expected to instruct through a wholly American approach. “Language and culture are linked,” he reasons, “and families should know what they are getting into.”

Bringing the school community together is also advantageous. At CAIS, administrators ensure that English-speaking staff is versed in Chinese culture, while Pioneer Valley frequently holds all-school gatherings. These build relationships that are of value when crossing the next bridge: designing the curriculum and gathering appropriate materials.

Additionally, when Chinese language teachers collaborate with their English-speaking colleagues to select math, science, and language arts materials, the content across classes will be mutually reinforcing. Teachers and administrators must also be mindful of how the curriculum advances into middle and high school, advises Michael Bacon, immersion advancement coordinator for Portland Public Schools in Oregon.

As Dr. Wang brought the workshop to a close, it was evident that participants and speakers alike were invigorated to face the rewards and rigors ahead. One participant commented that, “Collaboration is the key to sustainability,” and this was met with affirmative nods. Even though the immersion journey is taking place in schools across the country, everyone is scaling the same peak. Sharing successes and exchanging strategies about how to overcome obstacles can advance everyone’s goals.

Chinese Language Learning in the Early Grades: A Handbook of Resources and Best Practices for Mandarin Immersion