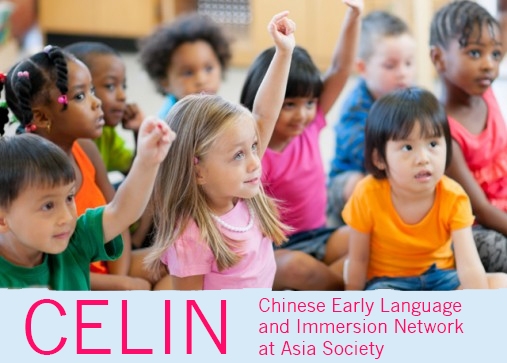 Lessons that Program Administrators Have Learned
Leaders in the field of Chinese language education describe key lessons they have learned while developing and administering Chinese language programs and ways that states, districts, and initiatives can leverage resources to build strong programs and exciting opportunities for students. Following are presentations from the 2014 National Chinese Language Conference in Los Angeles.

Introduction to CELIN
Dr. Shuhan Wang, Director of CELIN, talked about the vision, mission, and development of CELIN. Dr. Joy Kreeft Peyton, Senior Project Associate, shared with the audience CELIN’s efforts to build an online directory of immersion and early language learning programs and ways that stakeholders can get involved through the website, newsletter, conferences, and meetings. Slides

Building an Immersion Program for a Global Age: Students as Linguists and Diplomats
Christopher Livaccari, Director of the Upper Elementary Principal and Chinese Program at the International School of the Peninsula, Palo Alto, CA, described the program’s approach to building global citizens through building student identity and providing opportunities for travel and global interaction. Slides

“What do you mean by ‘immersion?’” Goals and Principles of Chinese Language Immersion Instruction
Dr. Jeff W. Bissell, Head of School at the Chinese American International School (CAIS), San Francisco, CA, described the key features of immersion education at CAIS. All immersion schools must consider a variation of these features in their quest to achieve excellence. Slides

“But I don’t speak Chinese:” Five Tips for Observing Immersion Classrooms With Confidence
Stacy Lyon, Chinese Dual Language Immersion Director for the Utah State Office of Education, gave guidance on key features and points to be looked for in Chinese immersion programs even when the observer’s Chinese language proficiency is limited. Slides

Immersion Leadership 101: Knowledge and Skills that Effective Program Administrators Need
Sue Berg, CEO and Executive Director of Yinghua Academy in Minneapolis, MN, and an experienced program administrator, described key knowledge and skills that she wishes she had known when she started working in the field. Slides

From Immersion to Flagship
Dr. Der-Lin Chao, professor and head of the Chinese program at Hunter College, described the goals and expectations of Language Flagship programs, how immersion and higher education programs can be articulated through the Flagship program, and ways that the two efforts can contribute to each other’s work and success. Slides

Leveraging Resources to Support and Expand Immersion Programs: The Case of the State of Washington
Dr. Michele Anciaux Aoki, Supervisor of the OSPI World Languages and International Education Program for the State of Washington, described the many sources of funding and other support that Washington state has used to build a strong system of language immersion programs. Readers are advised to look for resources that may have already existed in their local or state communities. Slides

Back to Conference Presentations