Q&A: Orville Schell on the State of U.S.-China Relations 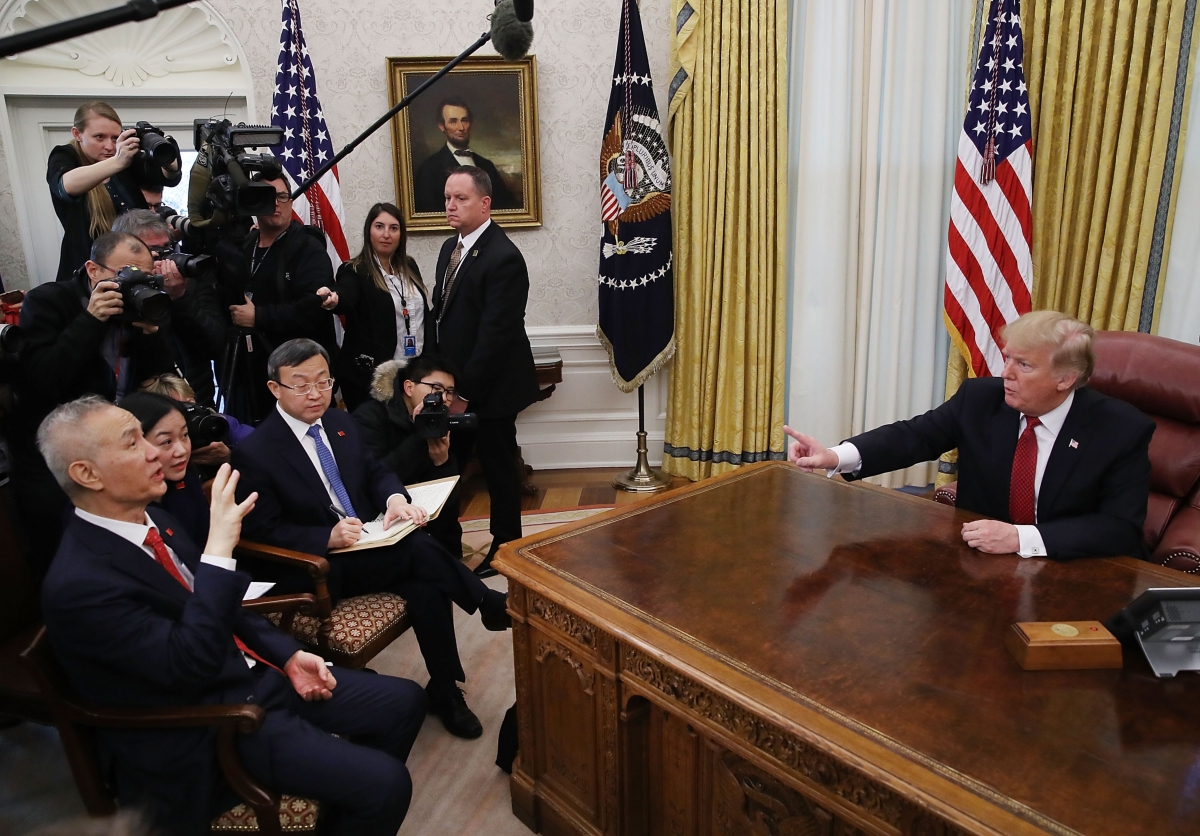 U.S. President Donald Trump speaks during a meeting with Chinese Vice Premier Liu He (L), in the Oval Office at the White House on January 31, 2019 in Washington, DC. (Mark Wilson/Getty Images)

On February 13, Orville Schell will join Susan Shirk, Thomas Christensen, Arthur Kroeber, and Winston Lord for a discussion of a new task force report on U.S.-China relations. The program will be available globally via live webcast at 9 a.m. New York time.Learn more

In February 2017, just weeks after the inauguration of Donald Trump as U.S. president, members of a high-level task force convened by Asia Society's Center on U.S.-China Relations and the University of California San Diego published a report outlying a series of recommendations for the new administration.

In the ensuing two years, the relationship between China and the United States has played a significant role in the Trump administration's foreign policy. In order to assess where we are at the midpoint of Trump's term, the Task Force on U.S.-China Policy will release a follow-up report, entitled Course Correction: Toward an Effective and Sustainable China Policy, on February 12.

Asia Society's Matt Schiavenza spoke with Orville Schell, Arthur Ross Director of the Center on U.S.-China Relations and co-chair of the Task Force, about the new report as well as the general state of U.S.-China relations under Trump.

A key suggestion included in the report is for the U.S. to engage in “smart competition” with China. How would you define that?

We have 20 very smart, able, experienced members on the task force, and there are always variations of views. So while I can only really speak for myself, I can represent the general thrust of the report. I think all of us feel that we are at an extraordinary and troubled moment of inflection where the assumptions that we all had for the last 30-40 years — namely that engagement would slowly work its way and over time we would become more convergent with China rather than less, that China would continue to reform and change, that if there could be a few more ballet troupe exchanges, educational interactions, and increased trade, we would grow closer together rather than further apart — is under serious question by an increasing number of my generation of China specialists.

This raises the fundamental question: "If we’re in a post-engagement era, what should our posture be toward China?" We’ve come up with this notion of "smart competition" as a short-hand way of saying that while we understand and subscribe to the general thrust of what the Trump administration is doing, in principle, by way of standing up to China in new ways, we also have some serious disagreements with this as a complete policy formulation.

What we’re calling with “smart competition” is for the U.S. to be much more forceful in responding to various kinds of Chinese abuses, inequities, and failures to live up to their agreements, while at the same time, keeping the door open to actively working together on areas on common interest. In this latter area, the Trump administration has not done as well as it could.

The first iteration of this report came out two years ago when the Trump administration had just taken power. How would you say that the U.S.-China relationship has changed in the ensuing period?

[Chinese President] Xi Jinping’s domestic policies have really tightened up. The Chinese Communist Party has cracked down on basic notions of liberal, democratic principles. What's more, his much more forceful and unrepentant policies of reaching out to an ever broader circumference overseas to challenge democratic practices have done a lot to make people doubt that the U.S. and China are coming closer together and sharing more common interests. Instead, many on our Task Force perceive the two countries as diverging, and possibly on a collision course.

Many on our Task Force perceive the two countries as diverging, and possibly on a collision course.

How many of the changes under Trump have had to do with his personal characteristics and idiosyncratic views? Would you say his administration represents a permanent inflection point in the relationship? Or is Trump an anomalous figure that, as soon as he goes, things will revert to the status quo ante? Is Trump himself an indication that things have changed? Or is he a blip?

Xi Jinping’s not a blip and things on the Chinese side have changed in a striking manner under his rule. And, things have also changed in the United States quite independently of Trump.

In fact, China’s own actions and behavior have accomplished something nothing else has: China and the “China threat” has become one of the only issues that Democrats and Republicans seem to agree on in Washington. At the same time Trump’s high state of paranoia — which causes him to naturally view foreign powers as predatory, has led to his version of pushback against China via higher tariffs, concern about trade deficits, and so forth. It’s a complicated tableau.

But there are parts where Trump is right, accidentally or not. For example, he may believe that we’re in a period where it no longer best serves American interests to keep hoping that the U.S. and China share more in common than not.

Xi Jinping’s not a blip and things on the Chinese side have changed in a striking manner under his rule.

In March there’s a deadline for the U.S. and China to resolve their trade issues, and if they don’t reach an agreement the U.S. will impose $200 billion worth of tariffs on China. If you were advising the U.S. government on this, what would you suggest?

There’s no doubt that the playing field is out of level, and that in many ways U.S. businesses are not playing in a reciprocal environment. That’s just the fact of the matter. The question then becomes: What do you do to level that playing field? Trump’s answer is to get the attention of the Chinese leadership through tariffs and by befriending Xi. Well, OK. Fair enough. But then what do you do? What’s the program, once you get their attention? What are you asking them to do besides lowering tariffs and being a little less mercantile?

And, there are some obvious areas of potential convergence. For instance, climate change, where the U.S. and China actually have an immense common interest, and where President Barack Obama had made great strides with China. But Trump has just thrown it all out of the helicopter. This a tremendously harmful piece that is now missing and undermines the whole relationship because it deprives us of one area where we could actually collaborate.

What our report is calling for is for the U.S. to aggressively seek to create a more equitable economic partnership and to come together on those admittedly rather few areas where we agree. However, we’re calling on Washington to also stand up to Beijing in those areas in which the United States is being unfairly bested and taken economically or where China is acting in an overly aggressive and overweening way, such as in the South China Sea, in regards to Taiwan, the East China Sea, and Xinjiang.