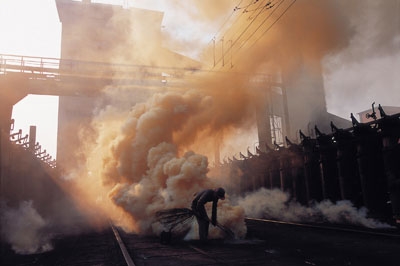 Coal is the primary source of energy and electricity for China and the United States, the world's two largets emitters of greenhouse gases.  As China overtakes the U.S. in terms of annual emissions and the U.S. struggles to atone for its historical emissions record, both nations will struggle with the same question: what can be done about coal? Plentiful and inexpensive, coal seems to be the only viable way to meet either nation's energy demands in the near term.  As part of the Center on U.S.-China Relation's work to explain the underlying causes and effects of China's climate problems, MINED IN CHINA explores the effect of the coal industry on the Chinese people.

Curated by Susan Meiselas and Orville Schell, MINED IN CHINA brings together the work of 18 Chinese photographers who have chosen China's massive coal industry as a subject.  China's 30-years of headlong growth have required a concurrent boom in energy production; MINED IN CHINA reveals the sobering effects that boom has had on the people and places that have fueled it.  A museum exhibit of stunning photography and video, MINED IN CHINA opened at the Houston Center for Photography in Spring 2008.  MINEDINCHINA.com, where many of the photographs can be seen, launched in early 2009.

MINED IN CHINA is a project of the Asia Society Center on U.S.-China Relations with support from the Open Society Institute.  It is part of the Center's ongoing efforts to highlight China's environmental problems and their solutions.