China in Hollywood, Hollywood in China: A Discussion with Erich Schwartzel and Ying Zhu | Asia Society Skip to main content

China in Hollywood, Hollywood in China: A Discussion with Erich Schwartzel and Ying Zhu 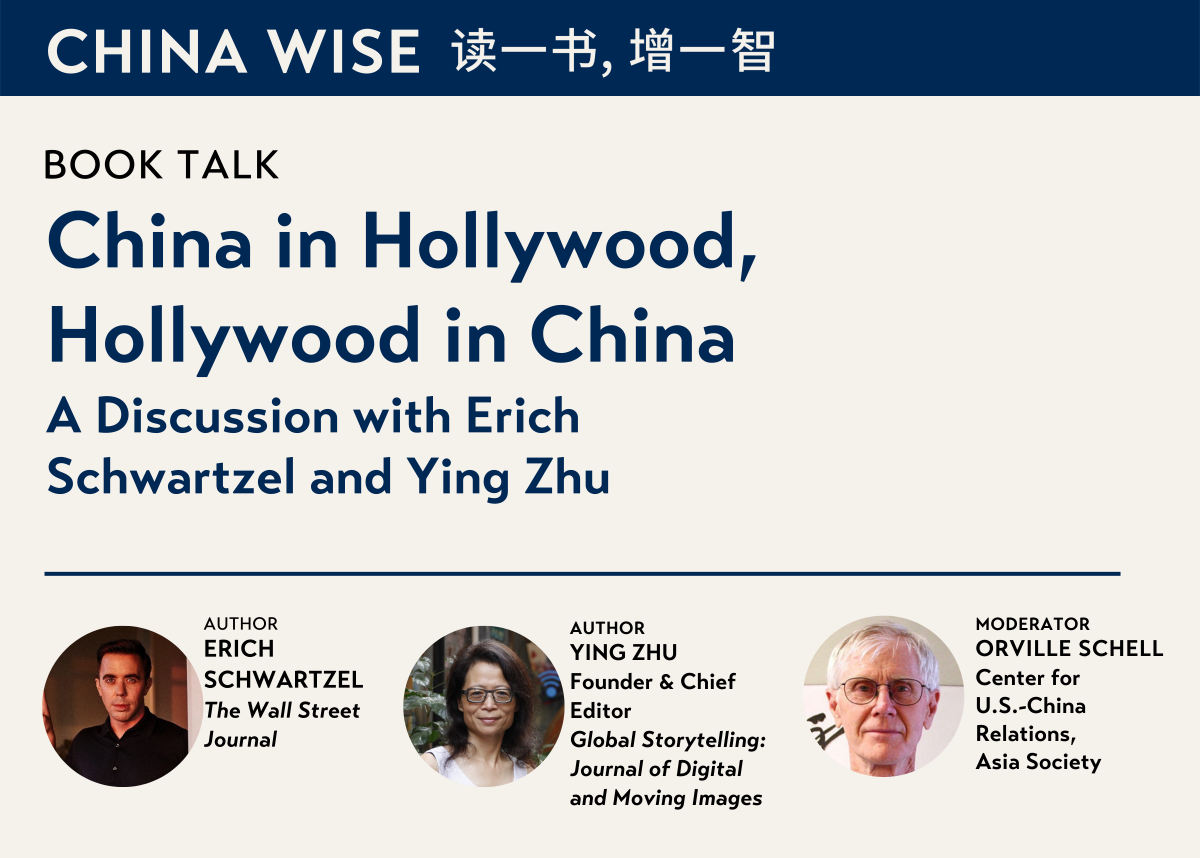 To China’s leaders, movies aren’t just for entertainment. They’re a big business, and a battleground for the hearts and minds of viewers, within China and throughout the world. How is that playing out, and how does it affect U.S. interests and Hollywood’s bottom line? Find out in this conversation with Wall Street Journal Hollywood reporter Erich Schwartzel, author of the new book Red Carpet: Hollywood, China, and the Global Battle for Cultural Supremacy, Ying Zhu, founder and editor of the academic journal Global Storytelling: Journal of Digital and Moving Images and author of Hollywood in China: Behind the Scenes of the World’s Largest Movie Market, and the Asia Society Center on U.S.-China Relation’s Arthur Ross Director Orville Schell who has written, among his many books, Virtual Tibet: Searching for Shangri-La From the Himalayas to Hollywood.

Erich Schwartzel has reported on the film industry for The Wall Street Journal since 2013. Previously, he covered energy and the environment for The Pittsburgh Post-Gazette, where his work won the Scripps Howard Award for Environmental Reporting. Schwartzel's first book, Red Carpet: Hollywood, China, and the Global Battle for Cultural Supremacy, was published in February 2022 by Penguin Press and detailed the growing influence of China on the American entertainment industry. Red Carpet was a New York Times Editors' Choice, called a "page-turner" by Foreign Affairs, and named one of the best books ever written about Hollywood by Esquire. Schwartzel's work on Red Carpet was featured on NPR's Fresh Air, CNN’s “The Lead with Jake Tapper,” and excerpted in the Atlantic and the Washington Post.

Ying Zhu is the founder and chief editor of the peer-reviewed academic journal Global Storytelling: Journal of Digital and Moving Images. The recipient of an American Council of Learned Societies fellowship, Fulbright Senior Fellowship and a fellowship from the National Endowment for the Humanities, she is the author of four books including Hollywood in China: Behind the Scenes of the World’s Largest Movie Market and Two Billion Eyes: The Story of China Central Television (both from The New Press) and co-editor of six books including Soft Power with Chinese Characteristics: China’s Campaign for Hearts and Minds. Ying previously served on the faculty at the City University of New York and as a professor in the Academy of Film at the Hong Kong Baptist University and is an adjunct professor in the School of Arts at the Columbia University.

Orville Schell (moderator) is the Arthur Ross Director of the Center on U.S.-China Relations at Asia Society. He is a former professor and Dean at the University of California, Berkeley, Graduate School of Journalism. Schell is the author of fifteen books, ten of them about China, and a contributor to numerous edited volumes, including The New Yorker, the Atlantic, The New York Times, The Nation, and The New York Review of Books. His most recent book My Old Home: A Novel of Exile, was published in 2021. Schell worked for the Ford Foundation in Indonesia, covered the war in Indochina as a journalist, and has traveled widely in China since the mid-70s.