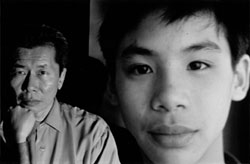 Blood Links traces William Yang’s scattered family’s migration from China to Australia over a hundred years ago. Defying conventional theater, Yang presents an intimate monologue with over 500 slide images that explores the ties which bind families. Yang is one of Australia’s most respected artists and a world-renowned photographer. Asia Society spoke to Yang about his autobiographical works and career as a perfomance artist.

Blood Links traces your family across several generations and regions. What inspired you to reflect on your family history?

It was a slow evolution because Blood Links is actually my third piece on my family. The very first performance piece I did in 1989 was a collection of nine short stories and photo essays. My mother had started to show me photos of my family and tell me stories. That story about my family was the most popular of the nine stories so I knew it was a theme that people found interesting.

My next piece called Sadness included two stories about my family. It also covered stories about the AIDS epidemic. When I was doing documentary photography in Sydney, I realized I was going to more and more wakes and funerals. This was during the height of the AIDS epidemic and so I went with that topic and used it as one of my stories.

Sadness was very successful as a piece, which I didn't expect, and it toured Australia and the world. After that I did a piece called The North and it was about my childhood in North Queensland. The North should have been in Sadness but I didn't have enough space to really store it so I did another whole piece. It was successful too. It was less confrontational than Sadness and people liked that. But I have now taken it off my repetoire because the material has been overtaken by Blood Links.

Blood Links is the story after my mother died and it is about my family scattered around the world - relatives just linked by blood, but still connected. The perfomance is mainly set in Australia and the United States but I also visit China.

I read that it was later in your life that you became more interested in your Chinese heritage. Growing up did you feel fully assimilated into white Australian society or was there a sense of being an outsider?

It was a bit of all those things. But colonialism is really the key issue here. I grew up in Australia in the '50s and my mother wanted us to be Western and she brought us up that way. So I suppose that the Chinese side of me was always unacknowledged. It wasn't all because of my mother's attitude but it was cultural as well. At that time Australia wanted people to assimilate and to speak English. If you spoke a foreign language you were mocked. That happened with other immigrant groups like the Italians. It was very much a monoculture. Australia only really became multicultural in the '70s. So I grew up feeling uncomfortable about being Chinese. But when I was 35 years old I met a teacher from Taiwan who taught me Taoism and it was through my engagement with Chinese philosophy that I began to embrace my Chinese heritage. That was the beginning of the process that led me to research the Chinese in Australia and start doing these pieces.

How would you compare Chinese Americans and Chinese Australians back home?

I can't really say in terms of my family. But in general, Americans are more conscious of the politics of race than Australians because of the black movement in the United States. For example when I first became aware of the word "racism" I thought it only applied to black Americans. But later I realized it has meaning for the Chinese as well. I think the main difference is that Chinese Americans are more politicized as a result of black politics in America.

Is it difficult to create a public work with very personal photographs about your family? How do your relatives receive your work? Do they agree with the way they are portrayed?

It is not hard for me because I am a public figure and all my work is personal. I am used to that public process. But I think it is a bit hard on my relatives sometimes. They are ordinary people and I make them see themselves on the big screen. At its best, they can see that they are part of a wider story and my work is really a homage to the family. At its worst, they argue with me and they feel slighted or I don't fulfill their image of themselves. But that happened anyway when I was a photographer.

You have done many autobiographical performance pieces. Is it a therapeutic experience for you?

It is definitely therapeutic because I talk it all out so it is a bit like therapy.

How did photography become a means of expression for you? When did your work transition from still photography to performance art?

I have been taking photographs for 30 years. I struggled for 15 years being a photographer and I started doing slide projections and performance pieces and I discovered that just from my own work alone I could generate enough money to survive so I didn't have to do freelance work. This way I could put all my energy into my own work. I have been very productive but I just had to put in those first fifteen years to get there. I never dreamed that I would be doing performance pieces.

When I started to do slide shows my projects were with just images and music. But There is an actual tradition of showing slides and talking. It has a terribly reputation, but I started doing that. So the first piece with the nine stories was when I started doing this type of work. Everyone liked it and I realized there was potential in this form. I kept doing them until I had my first very successful piece, and then people wanted me overseas, and so these performances have become my main work.

Do you see yourself as more of a theater artist or visual artist?

I have never really thought of myself as an actor. I showed an early interest in theater and I do know how to assemble a piece. But it is a combination of both.

What do you think of digital photography and editing? Has this new technology changed the way you approach your work? Do you use traditional slides projectors or have you moved to creating digital slide shows with sound?

I will turn digital although I haven't yet. I am in the process. It is just the convenience of it that appeals to me. I will follow but with a bit of a lag. Technology doesn't interest me because I am not technical. I use it as a means to an end. I am more interested in content and things I want to say. But this form that I have developed, monologue with slide projection, no one else really does so I think that is part of the reason I have been successful with it. It is a unique form.

What sort of technology do you use?

I use seven slide projectors and have one person helping me. There is a computer program to help with the transitions.

You recently performed in Shanghai, how was your work received and what was that experience like for you?

I participated in a symposium and extracted from Blood Links and from Friends of Dorothy, which is about the gay community in Sydney. Blood Links did extremely well. The Chinese just loved it because it is the sort of Chinese story they are interested in - a story about when their countrymen leave. I am sure deep down they are curious about what really happens after you leave China. So I am pretty sure I could do a successful season of Blood Links in China.

For Friends of Dorothy, everyone thought it was very important to start a dialogue about homosexuality in China, especially the Australian side of it thought it was very important. There is AIDS in China and people need to talk about these issues. I probably would choose to do it differently now. It was a little too in your face. But still I got a very good response and the students asked questions and were very curious. They didn't just ask superficial questions. The reaction and feedback were more than I could have hoped for.

My main involvement now with the gay community is with the Asian Gay and Lesbian Pride group. I've been involved in the parades and parties. The Asian gay community is very much behind the mainstream white Anglo gay community. For instance, the Mardi Gras had been going on for 15 years before the Asian Gay and Lesbian Pride had a float that participated. I have gotten caught up in Asian Pride, and that has included AIDS education, but I actually feel that I have done gay as a subject and I have moved on from it. The issues are more a less the same but somehow as an artist you concentrate on a certain theme and once you fully explored it in your work it is very hard to continue it.

Since I have traveled a lot, the next piece I think I want to do is on comparative cultures because I have visited different countries and it could be a sort of travel log.

Looking ahead, I know you have also recently created a piece with Aboriginal artists. Could you speak about that new piece? Is 'marginalization' the common theme? Will you be bringing this piece back to the United States?

After Blood Links I actually ran out of personal stories I wanted to tell so I accepted doing a commissioned piece with the theme of reconciliation for the Adelaide and Sydney Festivals. So I include an aboriginal piece and also a German story about colonialism and how minority groups get very badly treated.

Yes, marginalization is a common theme. Although I have been successful, I am still on the margins and even my form is very marginalized. But in some ways I think that this works for me in that I am the only one doing these sorts of work. They are on a small scale so in some ways more accessible. It also doesn't take that much money to get one of my shows up, unlike doing a film. This gives me certain freedom as well.

This new piece will begin to tour this year but it won't be coming to the United States probably until the following year.