The World, Not Australia, Could be Rudd's Stage | Asia Society Skip to main content

The World, Not Australia, Could be Rudd's Stage 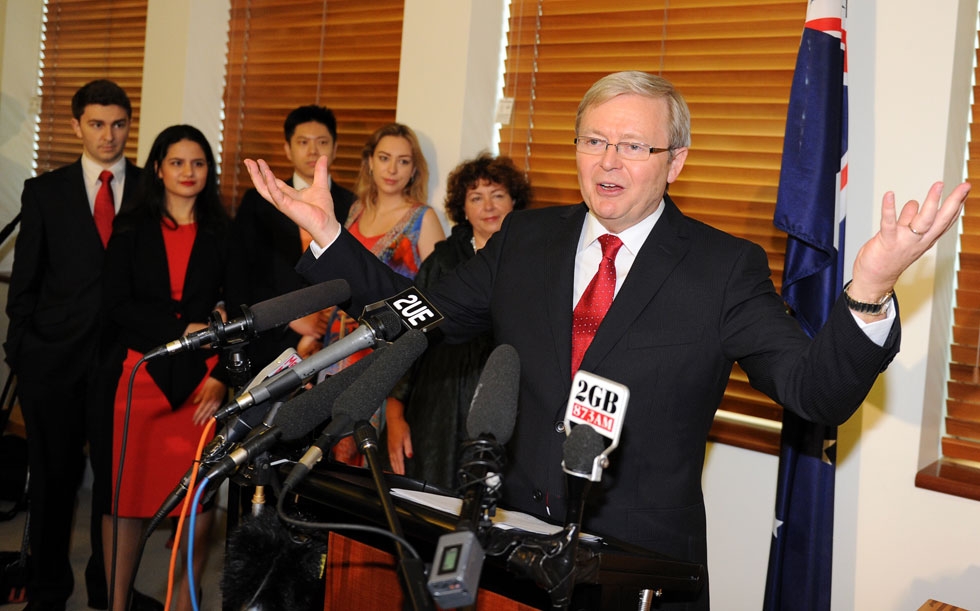 "All the world's a stage, and all the men and women merely players," reads the monologue in Shakespeare's As You Like It. "They have their exits and their entrances, and one man in his time plays many parts."

For Kevin Rudd — who dramatically quit his job as Australia's foreign minister in a vain bid to grab a second term as prime minister — Canberra politics might just be only one part. His loss in a vote of MPs of the governing Labor party to incumbent Prime Minister Julia Gillard this week should not be viewed with disappointment, but rather as a potential opening for him to pursue a new, global role.

Rudd says he will stay on in the Australian Parliament as a backbencher. But there's a whole world out there beyond the boundaries of his Griffith electorate, which straddles the suburbs of the nation's third largest city, Brisbane.

Perhaps he has lingering hopes that one day he will be able to launch another bid for the prime ministership. Perhaps. But the battle between Rudd and Gillard was marred by vitriol and personal attack, particularly against Rudd's management style and temperament. And, with so much bad blood spilled on the party room floor, many commentators doubt another Rudd comeback can ever happen.

So what if Rudd does choose to expand his career horizons beyond his country's shores?

One big question is whether these accusations — made in the heat of a bitter domestic political brawl — will stick in the global arena. Have they ruined what has, until now, been his impressive international reputation? Moreover, would Gillard give him the necessary official backing after criticizing him so openly?

Let's just suppose for now that she would (if only to end the potential for more party in-fighting). As a fluent Mandarin speaker, former diplomat, and friend to the East and West, Rudd's record suggests he might be well placed to take over one of the eminent global institutions, the World Bank, where U.S. national Robert Zoellick announced his resignation earlier this month.

The U.S. is facing pressure to have a more democratic process with respect to the nomination process of the World Bank presidency — a job always held by an American since the institution was set up in 1944.

As China's People's Daily Online reported, China expressed hopes that the World Bank would follow "the principles of openness, competition and selecting based on qualifications."

Fellow national James Wolfensohn gave up his Australian citizenship and became an American in 1980. He was appointed to the World Bank presidency in 1995. This time around, with rising calls for a non-American appointment, the kangaroo and emu on Rudd's passport might help, rather than hinder, his prospects.

Rudd also knows the World Bank well. In 2011 as Australian foreign minister, with mounting public criticism over a lack of oversight in the awarding of AusAid contracts, Rudd traveled to Washington DC where he inked a new "Partnership Framework" that endorsed Australia's support for the Bank.

As the World Bank increasingly navigates delicate political situations in countries with weak institutions, it is important that its leadership is as much in tune with macro-economic policy as it is with sensitivities on the ground. Wolfensohn was especially aware of this dynamic, writing in his autobiography, "If we listened more to the people in the slums and villages, and to their leaders as well as their emerging civil societies, we could vastly improve the effectiveness of our interventions."

Leaving aside recent accusations against him by his Australian political opponents, Rudd's resume has many of the credentials needed to continue the Bank's dialogue with the developing world. If he did put his name forward, the U.S. should at least consider it among a list of others, and do this not just to appease the Bank's member governments who want a more transparent nomination process.

The deadline for nominations for the World Bank job is March 23.