The Wonderful World of Korean Food: Snacks and Seasonings 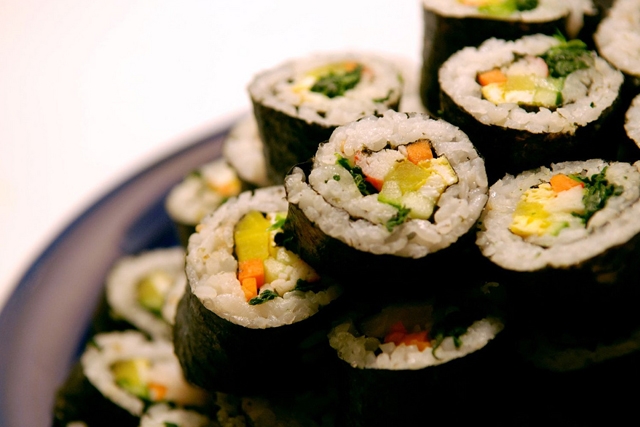 In the past, every Korean household would make soy sauce, doenjang soybean paste and gochujang red pepper paste. These three are the most important seasonings in the Korean diet, so preparing them well is another important annual task along with making kimchi.

Each Korean household would keep a series of large and small crocks or earthenware jars in their backyards to contain soy sauce, soybean paste, red pepper paste, salt and various types of kimchi.

Today ready-made traditional seasonings are available to buy, yet many households particularly in the countryside still keep the old practice.

Sunchang, Jeollabuk-do is famous for making some of the best gochujang.

Koreans have developed a variety of traditional sweets and beverages which make nutritious snacks and delicious desserts.

Tteok
(Traditional Rice Cake)
Tteok is traditional Korean cake made from rice powder. Koreans prepare it for festive occasions such as birthdays and weddings as well as for ancestral memorial services. They also have it on seasonal occasions such as seollal (Lunar New year's Day) and chuseok (Korean Thanksgiving Day). Koreans have the custom to prepare tteok when they move residence, and distribute a plateful to the new neighbors. It makes a natural and healthful snack.

Patsirutteok
Rice powder and the pounded red beans are layered alternately in siru, an earthenware steamer, with a final layer of red beans, and the mixture is steamed. The red color of the red bean is believed to keep away evil spirits and bad luck, and this tteok is prepared for many occasions to bring good luck.

Hwajeon
Kneaded glutinous rice dough is shaped into small circles and pan-fried with flower petals of azalea, rose or pear decorated on the top of the dough.

Jeolpyeon
Pounded and steamed rice dough is pressed in a wooden pattern mold, cut into pieces, and coated with sesame oil.

Gyeongdan
Glutinous rice dough is formed into small balls, placed in boiling water and removed, and then coated with different-colored powders made from sesame seeds, beans, cinnamon, chestnut, etc.

Hangwa
(Traditional Sweets and Cookies)
Hangwa is appreciated for its artistic and decorative colors and patterns as well as for its pleasing sweet taste. Often taken along with traditional beverages, it is regarded as a healthful snack and classy dessert. Beautifully packaged baskets or boxes of hangwa also make excellent gifts, especially appropriate for the elderly. It is available at shops specializing in traditional cakes and sweets and special sections in department stores.

Gangjeong
A light and fluffy sweet made from glutinous rice and honey. It is deep-fried and coated with popped rice, cinnamon, sesame seeds, etc.

Yakgwa
this soft cookie is made from wheat flour dough mixed with honey, rice wine, and sesame oil. The dough is flower-patterned and fried, and then marinated in honey before serving.

Dasik
Powder of sesame seeds, chestnut, beans, medicinal herbs, or pine pollen are made into dough mixed with honey. The dough is pounded and then patterned with various pattern molds.

Hwachae
(Traditional Cold Beverage)
Traditional cold beverages are called hwachae. They are usually made with fruits or grains, and water sweetened by either sugar or honey, or flavored and colored by omija (fruit of the "five-taste" tree, Schisandra chinensis). There are also hwachae made from Oriental medicinal foods, azalea or pine pollen.

Sikhye
A sweet rice punch. Koreans like it so much that canned sikhye is now widely available.

Sujeonggwa
A sweet drink flavored by ginger and cinnamon. Softened dried persimmon and pine nuts are added at serving time.

Fruit Hwachae
Fruit punch made from cherries, strawberries, peaches or watermelons. There are also hwachae with floating azalea petals, boiled barley, pine pollen, or slices of pear in omija-flavored water, sweetened with honey or sugar.

Any time you pass by shopping districts, traditional markets, back streets of areas bustling with crowds, tourist spots or college towns, you will come across street vendors, canopy wagons or flour food eateries offering snacks popular among a wide range of age groups. They often serve as an inexpensive meal for Koreans in a hurry or for tourists who want to partake of the local culture.

Ramyeon
Korean-style ramen noodles. Besides classic ramyeon, there are a variety of others such as seafood-added (haemul ramyeon), kimchi-added, etc. Instant varieties in a Styrofoam bowl can be found at supermarkets or convenience stores; just add boiling water and it's ready in a few minutes.

Gimbap
Boiled rice is seasoned with sesame oil and salt, and rolled up in a sheet of laver along with strips of carrot, cucumber, spinach, egg sheet, pickled radish, bulgogi, cheese or ham. Sliced, it becomes one of the favorite Korean fast foods.

Tteokbokgi
Rice powder is steamed and made into a long cylinder called garaetteok. It is cut finger-length and cooked in a spicy, sweet sauce. Vegetables, or ramyeon can be added depending on one's taste.