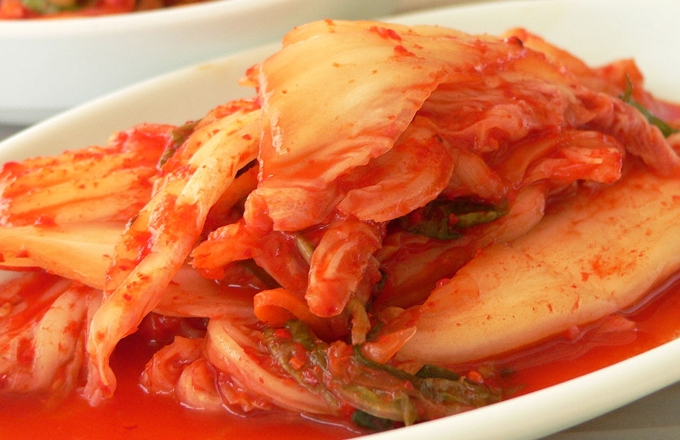 Kimchi is a fermented vegetable dish allowing long storage. In the past, Koreans used to prepare it as a substitute for fresh vegetables during the winter months. Today, housewives still prepare a large amount of winter kimchi, somewhere from late November through early December. This nationwide annual event is called gimjang.

The introduction of red pepper from Europe, through Japan, in the 17th century brought a major innovation to kimchi and to the Korean diet in general. There are now more than 160 kimchi varieties differentiated by region and ingredients. Kimchi is the basic side dish at every Korean meal; it is also an ingredient in other popular dishes such as kimchi stew, kimchi pancakes, kimchi fried rice and kimchi ramyeon (ramen noodles). Kimchi is being widely tried in various ways in an effort to create new tastes and flavors. These days kimchi is gaining popularity worldwide for its nutritional value and disease-prevention effect.

Oisobaegi
(stuffed cucumber kimchi)
Suitable for the summer months when people lose their appetite. Slit-cut cucumbers are stuffed with a mixture of vegetables and seasonings, and fermented a day or two.

Chonggak Kimchi
(bachelor radish kimchi)
Nice and crunchy. Unmarried Koreans traditionally wore their long hair in a braid. Radish with tops resembles the head and ponytail of a traditional bachelor.