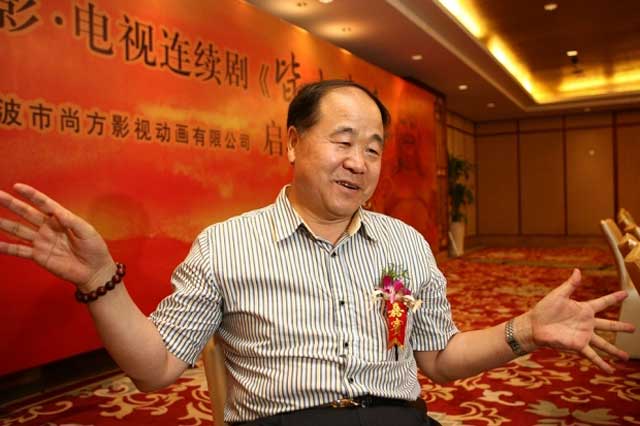 Literature in translation in the United States has wide but shallow roots, making English language stars out of the likes of Gabriel Garcia Márquez and Haruki Murakami, but leaving most of China's writers struggling to take hold. Now, veteran translator Howard Goldblatt, the man responsible for bringing to life in English the major works of novelist Mo Yan, winner on Thursday of the 2012 Nobel Prize for Literature, is predicting a surge in interest in the Chinese author.

Goldblatt translated Mo Yan's 1930s wartime novel Red Sorghum for Viking Press in 1993. "Wow, was it wonderful," Goldblatt recalled in a telephone interview. But the U.S. publisher had a harder time in the market with the manuscript of Goldblatt's personal favorite of Mo Yan's works, the satirical novel Republic of Wine, about China's relationship with food, published in English in 2000.

"It's a technically brilliant book, bringing four strains of a complex story together. But as happens with lots of literature in translation in America, they couldn't see it selling," Goldblatt said, "That won't happen now. There will be strong negotiations for his next work."

The Nobel committee said in its announcement of the award worth $1.2 million that the "hallucinatory realism" of Mo Yan, a pen name that means "don't speak" in Chinese, has been "judged subversive because of [its] sharp criticism of contemporary Chinese society."

Mo Yan, who was born to farmers in 1955 in Shandong province and lives in Beijing, is the second Chinese novelist to win the Nobel Prize for literature after Gao Xingjian won in 2000 in exile in Paris.

Goldblatt is now elbow-deep Mo Yan's latest novel, called Frogs in English, which he says is a "very personal and evocative" novel about China's one child policy. The book's central character is based on the author's real life aunt, a rural doctor who presided over thousands of births and thousands of forced abortions as family planning officials tried to keep a lid on China's population.

Excerpted in the British literary magazine Granta in October, Frogs is now being shopped around by the Wylie Agency in New York. Goldblatt says that despite the spotlight of the Nobel win, translations face the harsh reality that only about three to four percent of books published in the U.S., the world's most profitable market for books with over $27 billion in sales in 2011, were originally written in a language other than English. (China's is now the world's largest book market in terms of number of books sold).

But Goldblatt predicts the Nobel Prize should help Mo's work reach a broader American audience. He says his friend, the translator John Nathan, noted an increase in U.S. sales of the works by Japanese novelist Kenzaburo Oe after he won the award in 1994. "That's when John said his royalty checks really got a boost from the incredible bump in sales from the books."

A prolific writer, Mo also has two other books translated by Goldblatt forthcoming. The first, POW!, is a tale of a kid who can't get enough meat to eat despite living near a slaughterhouse. It will hit bookshelves at about 400 pages in November from Seagull Books, distributed by the University of Chicago Press.

The second, from the University of Oklahoma Press in January, is Mo's Sandalwood Death, a tale set during the Boxer Rebellion of 1900 in northeast China during an episode when peasants led a rebellion against German settlers building a railway there. Goldblatt says the story is bookended by multiple points of view, each with a different style, and anchored at its middle by the voice of an omniscient central narrator.

"It's a different voice than Mo's from past novels, separated as he is from the events of the time of the story by 100 years, but it's definitely his strong voice," Goldblatt said.

In person, Mo proved "unobtrusive and quiet" when he once visited Goldblatt and his wife at their home in Boulder, Colorado, staying there for a week. "He read everything in the house. Not just flipping through, but reading everything cover to cover," Goldblatt said, noting a particular interest at the time in writers from Taiwan.

"We sat and talked for days. He has an enormous wealth of stories and anecdotes," says Goldblatt, noting that since it takes about a year to translate one of Mo's books, he's barely been able to keep up.

"There are hundreds of stories but we've only managed to publish one collection," Goldblatt says, referring to the 2001 collection Shifu, You'll Do Anything for a Laugh, championed by the late Richard Seaver of Arcade Books, publisher of Samuel Beckett and William S. Burroughs.

The titles of Mo Yan's Seaver had bought for publication in English, including such novels as Big Breasts and Wide Hips, Life and Death are Wearing Me Out, and The Garlic Ballads, were taken on by Skyhorse Press upon Seaver's death in 2009 and all remain in print.

"Now we may see a circling back to earlier works that remain untranslated and an interest in collecting more of Mo's stories," Goldblatt said.

Goldblatt says what's hard about translating Mo's work has little to do with Chinese.

"The biggest challenge is to write well and I'm the last person in the world to say whether or not I've been successful at that. As to the Chinese, it's not the words, because I can always ask Mo Yan. Capturing his tone is the hardest thing to do, distancing myself from the text and reading it carefully and getting a sense of how his books do what they do so well. The Chinese language does not lend itself to literal translation." Working with Mo over the years has required Goldblatt to fire off regular emails to Beijing seeking clarification. He usually gets quick replies, but a recent query went unanswered.

"I heard from lots of people that Mo Yan didn't want to be in Beijing when the prize was announced and went into hiding in Gaomi in Shandong where he's from," he said. "I fully expect my brief congratulatory note to get lost in a wave of attention he's getting."