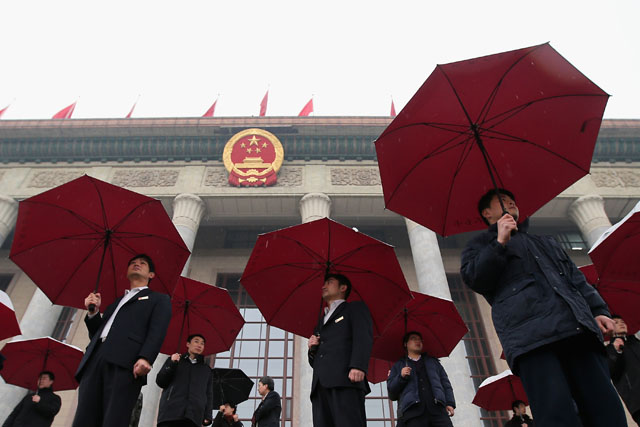 Soldiers dressed as ushers hold umbrellas in the rain at the entrance of the Great Hall of the People in Beijing on March 12, 2013. China's ruling Communist Party will gather in Beijing from November 9-12 to discuss a possible furthering of economic reforms. (Feng Li/Getty Images)

On Thursday, November 7, Asia Society New York's panel discussion "China, One Year Later" will assess China's leadership transition a year after Xi Jinping assumed the presidency, and explore what the future has in store for China and the world. Ahead of that discussion, political scientist Barry Naughton contributed the following post on China's economic outlook to our sister site ChinaFile.

China's economy is already two-thirds the size of the economy of the U.S., and it's been growing five times as fast. But now, China's economy is beginning to slow and is facing a raft of difficult problems. If China's leaders don't address these problems, the Chinese economic miracle could turn into a global economic nightmare. China's best hope to confront and resolve these problems now, before it's too late, is right around the corner at something called the "Third Plenum" — which Chinese media recently announced will take place November 9-12. Expectations are high. A Third Plenum in 1978 kicked off the entire reform era and began China's opening up. In 1993, another Third Plenum outlined the comprehensive market reforms subsequently carried out by Zhu Rongji. At the upcoming Third Plenum of 2013, China's new leaders will adopt a program of economic reforms that might, just might, keep them out of trouble and keep their economy growing for another couple of decades.

There are four key things you need to know to be ready for the big event. And just as many key questions.

The really interesting questions surrounding the Third Plenum are:

These are fundamental but complex issues where a declaration of principles is an appropriate starting place (and detailed programs are unlikely). This is where we should watch for progress in the Third Plenum. Stand by.

Barry Naughton is the So Kwanlok Chair of Chinese International Affairs at the Graduate School of International Relations and Pacific Studies at the University of California, San Diego.