Why It's So Difficult for Journalists To Report From Xinjiang 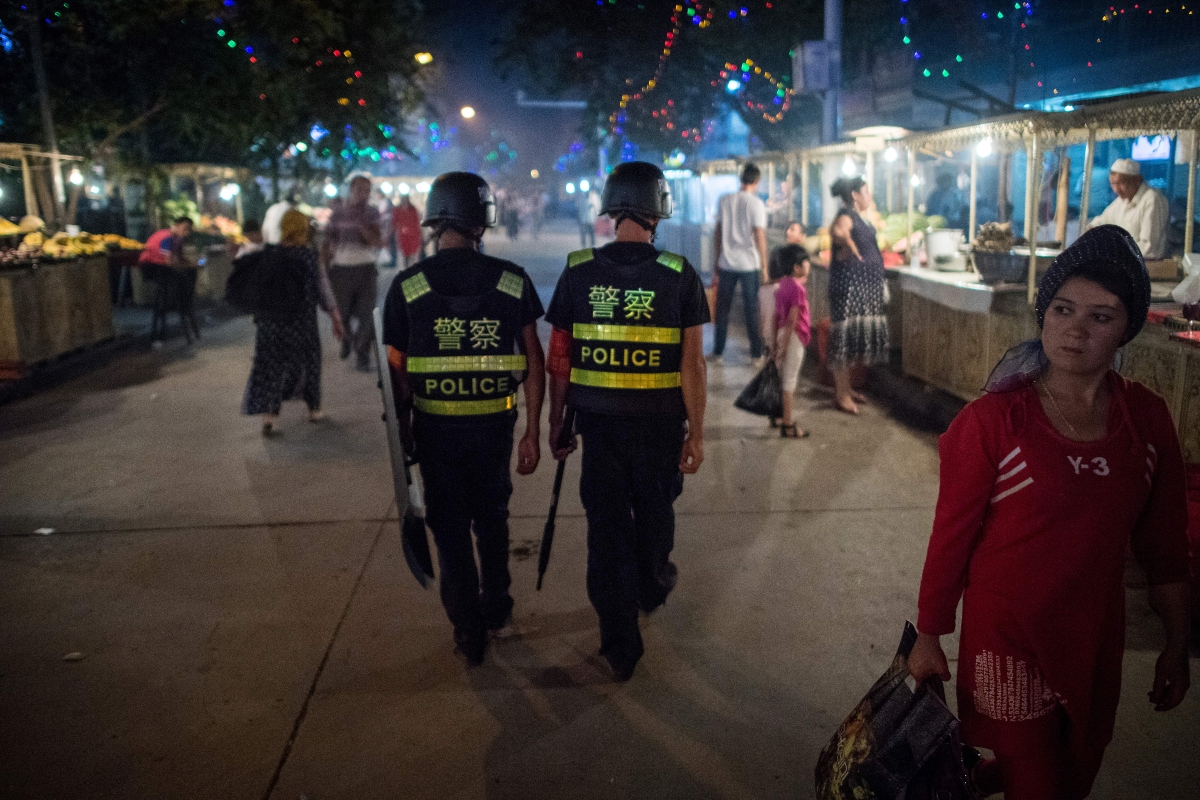 This picture taken on June 25, 2017 shows police patrolling in a night food market near the Id Kah Mosque in Kashgar in China's Xinjiang Uighur Autonomous Region, a day before the Eid al-Fitr holiday. (Johannes Eisele/AFP/Getty Images)

Since 2016, the Chinese government has detained more than one million Uighurs, a Muslim ethnic minority native to the Xinjiang region, in euphemistically-named “patriotic re-education camps” — part of a sweeping effort to Sinicize the region. In cities across Xinjiang, a geographic area more than twice the size of Texas, Uighurs are subject to pervasive surveillance from technology like facial recognition software and ubiquitous plainclothes police officers. More than one million Uighur homes now include Han Chinese residents tasked with supervising their “re-education.”

The Chinese government has characterized the camps as voluntary educational facilities designed for job training, a claim Uighurs and rights activists contest. But Beijing has nevertheless taken extensive measures to prevent international media from reporting on the camps.

Yanan Wang, a China-based journalist from the Associated Press, has reported extensively on and from Xinjiang. In a ceremony at Asia Society on Tuesday commemorating AP’s 2019 Osborn Elliott Award for Excellence in Journalism on Asia , Wang described the subtle ways government minders worked to thwart her reporting:

Both of the times we went there we arrived at the airport, we had a welcoming committee from the local authorities. They’re always very polite and professional. They say that “you’ve arrived in Xinjiang and we’re here to assist you in your reporting. Tell us what you’re working on so we can help you.” They offer us drives in their car and plenty of hospitality. Basically, from the moment we arrive, we’re followed by at least one car. There are a bunch of interesting scenarios that we came across. You can see that the local handlers are trying hard to be professional. They are members of the propaganda department, so they’re PR professionals. They don’t want to make it appear like it’s so stifling. At one point, we were taking photos and someone suddenly appeared on the scene to say he was a “concerned citizen.” He said he’d seen us taking photos and that it was an infringement of his privacy rights. He had this long monologue about privacy rights and about how it wasn’t right for us to take photos of him without his knowledge. We asked him, “Well, where are you in these photos?” and he’d go through all of them. He said we had to delete all of them. He’d say, “This is my brother,” or “This is my place of work, you have to delete it.” They had all of these interesting tactics to work around the idea that they were trying to obstruct our reporting and make it appear that someone who claims to be a concerned citizen.

The Chinese government has punished Uighurs brave enough to speak to foreign journalists, depriving reporters of sources with knowledge of what’s going on. In an Asia Society program on Xinjiang last October, Foreign Policy editor James Palmer broke down when he described how his Uighur contacts have disappeared.

“All of my Uighur sources are gone,” he said. “I can’t talk to people because they’re gone. I cannot reach them. Even Han Chinese in Xinjiang who were sources for people I knew have been arrested while talking to them.”

Palmer said that he hesitates to contact Uighur sources because doing so places them at risk.

These restrictions have made the reporting that has come out especially remarkable. Wang and Palmer use tools such as open source data, satellite photography, and government procurement records to piece together the truth in Xinjiang.

Even still, journalists must contend with a concerted effort from the Chinese government to impede coverage of the situation. At Tuesday’s award ceremony, an official from China’s consulate in New York said that the country’s current Xinjiang policy resulted from years of terrorist attacks in Xinjiang that claimed thousands of Chinese lives. Since the more extreme measures were implemented, the official said, these attacks have stopped. Aren’t the journalists failing to report the full story?

Wang noted that her reports always cited this perspective. “We would very much like to gauge what the Chinese population thinks about these policies,” she added. “Do you have any suggestions about how we can do that?”

Watch the complete video of the 2019 Oz Elliott Prize ceremony below: