WHO's Dr. Margaret Chan to Speak on Containing Contagion in a Wired World | Asia Society Skip to main content

WHO's Dr. Margaret Chan to Speak on Containing Contagion in a Wired World 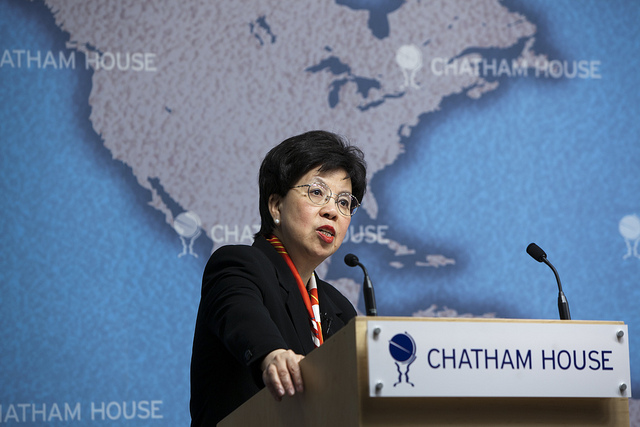 One of the inevitable risks of globalization is the spread of infectious diseases across countries and borders. In 2003, an outbreak of severe acute respiratory syndrome (SARS) gripped Hong Kong and spread worldwide, killing 774 people. Epidemiologists traced the SARS coronavirus to Chinese bats, where the virus mutated, evolved and crossed the xenographic barrier onto human beings. In 2005, a strain of H5N1 avian influenza, affected a variety of fowl across Southeast Asia. That virus in turn mutated and crossed over onto human hosts at an alarming scale, causing near-hysteria over the Tamiflu vaccine and even inspiring a 2006 song from the rapper M.I.A, "Bird Flu," about the discontents of globalization.

Next Thursday, December 20, Asia Society Hong Kong Center welcomes Dr. Margaret Chan, Director-General of the World Health Organization. Dr. Chan's talk, evocatively titled "Hot Spots in a Wired World," will address the dangers of infectious diseases in our increasingly interconnected environment. With the rise of multi-drug resistant tuberculosis and various adaptable and virulent pathogens from animal vectors, we might very well be in the post-antibiotic era. Steven Soderbergh's 2011 thriller Contagion depicted with brutal clarity the havoc and pandemonium a deadly zoonotic infection can cause. Science writer David Quammen, who gave a talk at Asia Society's center in Houston last month on his book Spillover, also addressed the urgent need to prepare for the spread of these diseases. It's easy to forget at times that the Ebola virus and AIDS both arose from animal hosts.

According to the United States Centers for Disease Control, the first key steps to curtailing a global pandemic are simple, straightforward health and hygiene measures that we might take for granted: washing our hands, food safety precautions, and being vigilant when we come into contact with certain animals. As more and more people travel, these measures will no longer be just a useful suggestion for our well-being, but a vital, unavoidable part of how we live our lives and ensure the health of those around us.