Who Is Rodrigo Duterte? Introducing The Philippines' Irreverent New President 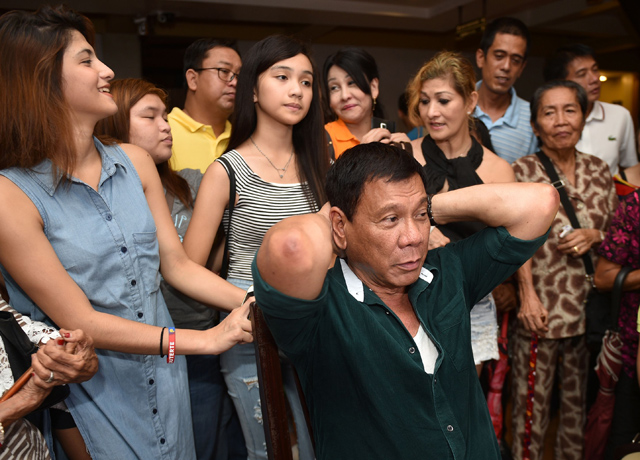 Philippine President-elect Rodrigo Duterte speaks during his first press conference since he claimed victory in the presidential election, at a restaurant in Davao City, on the southern island of Mindanao on May 15, 2016. (Ted Aljibe/AFP/Getty Images)

In the days since his victory in the Philippines' presidential election, Rodrigo Duterte has attracted international attention for a series of provocative statements, including a proposal to ban public drinking and smoking in the country and a desire to reinstate the death penalty. These remarks — as well as other inflammatory comments Duterte has made throughout his lengthy political career — have earned him comparisons to Donald Trump and raised uncomfortable questions for observers of the Philippines. Will Duterte's brash style translate into a departure from policies embraced by Benigno Aquino, the popular, successful outgoing president? Or does the president-elect's irreverence belie a more pragmatic approach that will largely keep current policies in place? In short, what would a Duterte presidency mean for the Philippines and its neighbors — particularly China?

In order to tackle these questions, Asia Blog spoke to two noted American experts on the Philippines: Hank Hendrickson, a retired U.S. Foreign Service Officer and the executive director of the U.S.-Philippines Society, and John Maisto, a veteran diplomat and the Society's president. Our conversation has been lightly condensed and edited for clarity.

Would you say Duterte’s victory resulted from primarily domestic reasons? Or was it a reaction to external issues, most notably the Philippines’ relationship with China?

Hank Hendrickson: It was all about domestic issues — foreign affairs didn’t play into it very much. Some of Aquino's legacies that will definitely be left in place, or even built upon by the next administration — such as the six-plus percent growth and the good governance agenda that he pursued. I would even argue that there's been progress in the South China Sea with the forthcoming arbitration case, a decision that will provide all the parties with a new framework. Much of the domestic issues have had to do with corruption, even though the incumbent administration set a very high standard.

Nevertheless, there was a sense that more needed to be done at a grassroots level, to build a more equitable economy, and to make growth more inclusive. But the 6 percent plus growth is a pretty good platform to build on. If you have policies that work, you're not going to throw them out and start over. You're going to build on them.

If Duterte's victory was not a repudiation of Aquino's policies, why did Philippine voters reject Aquino’s handpicked successor, Mar Roxas?

HH: The Philippine political system is very personality based, and the media plays that up. One of the things that people had noted, is that Mar Roxas’ running mate in the Liberal Party, Leni Robredo, is leading the vice presidential race. She pulled in at least 4 million more votes than Roxas. And like Roxas, she too was picked by the incumbent party, one whose president is leaving office with higher approval ratings than at any time since the Philippines began doing presidential polling. At the presidential level it's just an issue of personalities — that and electability factored into it.

One of the more colorful moments of the campaign was when Duterte said he would jet ski to the Spratly Islands, an archipelago claimed by the Philippines and China (and four other countries). Was the remark something Duterte said mainly for stylistic purposes, to try and inspire the Philippine population, or do you think he’d genuinely adopt a more confrontational approach to foreign affairs than Aquino?

John Maisto: My view is that it was all style. Duterte's a big style guy. At the same time, he’s an experienced politician on the local level, a four-time mayor of Davao. He’s a lawyer by training and was an assistant prosecutor. Some people in the Phililppines want to compare him to [former Philippines President] Joseph Estrada, but [Duterte] is not a drinker, he’s not a smoker, he’s really concerned about his health. A few days ago a New York Times piece analyzed the soft side of Duterte, in particular his policies toward poor people, women, and children as mayor of Davao. I think style is a very important part of his whole approach.

HH: It’s worth mentioning that Davao, geographically, is one of the largest cities in the Philippines. It's a big space. Duterte has a Harley-Davidson, and he would use it to personally check out incidents happening in the city. That, I think, accounts for the jet ski reference — because he couldn't take his Harley to an island, he'd take a jet ski.

How would you characterise the Islamic insurgency in Mindanao with Abu Sayyaf and other terrorist organizations? Is there a sense in the Philippines that the government is under control? Or is there still a large concern that these groups will pose a large security threat in the future?

HH: The Philippine government looks at the Muslim separatist issue as being essentially two conflicts. One is Abu Sayyaf and the terrorist and ransom gangs, which have some links to international and regional networks. Then there’s also the question of the autonomy of Muslim groups with which the government is dealing. They’re getting close to getting congressional approval of the Bangsamoro Basic Law — which, if ratified, will provide another mechamism for autonomy in the Moro heartland.

The hope is that once they have the terms of the autonomy worked out, they’d have a natural ally in the Muslim community who could work with the government to go after Abu Sayyaf. Most analysts think that without the mainstream Muslim communities, it would be a tall order to bring in Abu Sayyaf and they’ll continue to cause problems.