While Korea to Host G20, Eyes on US, China | Asia Society Skip to main content

While Korea to Host G20, Eyes on US, China 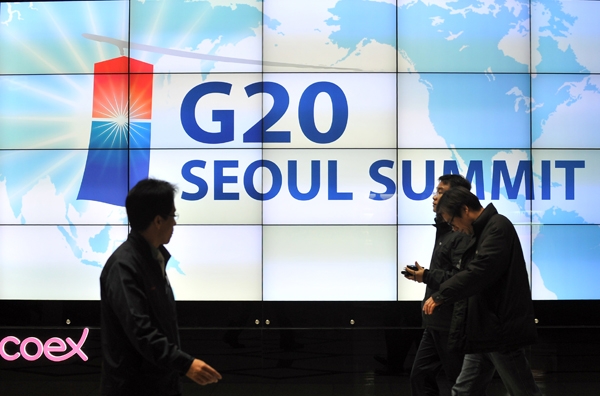 On Thursday, the G-20 Summit will begin in Seoul, South Korea, the first Asian nation and the first non-G-7 county to host the meeting. South Korea has invested a great deal, both financially and politically, into this event. For President Lee Myung-bak, the G-20 Summit gives the opportunity to showcase South Korea's arrival as an important economic player on the world stage, to promote his message of development based on Korea's growth-orientated model, and to stress the importance of removing barriers to free trade. But these themes have been overshadowed by concerns over exchange rates and protectionist threats, in particular the currency dispute between China and the US, a discussion likely to dominate the Seoul summit.

South Korea may find itself in the uncomfortable position of having to mediate between the US, its most important political and military ally, and China, its largest trading partner. Seoul will also push for ratifying the US-Korea Free Trade Agreement, which was signed by the presidents of South Korea and the US in 2007 but has yet to be ratified by Congress. It remains to be seen whether President Obama, newly weakened from the Democrats' losses in last week's election, will be willing to finalize the Free Trade Agreement in the face of opposition by protectionists in both parties back home.

Charles Armstrong is Director of the Center for Korean Research at Columbia University and an Asia Society Associate Fellow.