What Will Hu Jintao Think of 'Titanic 3D'? 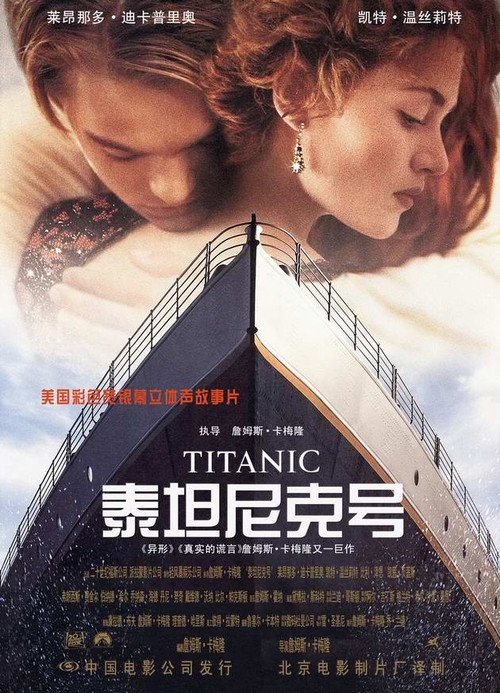 How exactly does Jiang Zemin feel about Hu Jintao? I have no idea. But I can’t help wondering whether Jiang is a bit miffed at the man who succeeded him in 2002 — and is now preparing to pass on the reins to Xi Jinping. It isn’t that Jiang would be displeased by any of the big developments that have happened on Hu’s watch, such as the Communist Party holding onto power (despite plenty of outbursts of discontent) and growth rates staying high (despite plenty of talk of imminent bubbles). Instead, it's a small matter that might tick Jiang off. Well, perhaps “small” isn’t the right word, as the grievance I’m thinking of could also be described as titanic — as in the blockbuster movie about to be re-released in 3D.

Jiang couldn’t say enough good things about Titanic when it first came out. He not only claimed to enjoy it but called on his compatriots to see it and learn from it — though it wasn’t always clear whether this was because he thought it contained a subtly radical meaning (a critique of capitalism embedded in the portrayal of the rich) or could offer clues to Chinese filmmakers about how to improve their own more politically correct movies. Whatever he liked about it, he surely must have been relishing the idea of a new generation of Chinese being exposed to the revamped version, but thanks to Hu, this might not be possible. For Jiang’s successor has recently taken to giving speeches (one in October, another later in 2011, which was the basis for Hu’s first 2012 publication) that refer to “hostile forces” who are bent on using Western cultural products to undermine China. How can the new and improved Titanic cruise into Chinese theaters at a time when Hu is demanding that the Party “remain vigilant” in what amounts to a cultural war with the West?

Whether Jiang’s favorite film gets to air again in China, where it did stunningly well the first time around, is not terribly important, but it is worth trying to figure out what Hu’s speeches have to tell us about where the country with the world’s biggest population and second biggest economy is heading. And since I teach and write about the past for a living, it probably won’t surprise anyone to find out that I think the key to doing this is to think in terms of how it fits into historic patterns. Above all, three things seem important to keep in mind.

First, we’ve seen things like this before. Both Hu’s call for a tougher line on cultural imports and related pronouncements, such as Xi Jinping’s telling university administrators to “step up” efforts to control ideological trends on their campuses, have past parallels — and not just Mao era ones. In the mid-1980s, calls for “opening” up to the world were offset at times by campaigns against the “spiritual pollution” coming from the West. A more dramatic cultural and campus chill set in after 1989’s June 4th massacre. And when NATO bombs hit the Chinese Embassy in Belgrade in 1999, television stations pulled American programs from their schedules and ran various patriotic Korean War epics in their place. (Or maybe just back-to-back showings of the same film. I was in China at the time, and when I flipped on the TV, one of two or three scenes always seemed to be on.)

Second, this call for “vigilance” seems in some ways to have come out of nowhere. There isn’t the same sort of obvious explanation to fix on for a lashing out against Western culture or a ramping up of paranoid talk of foreign “plots” to undermine Chinese stability. Yes, there have been plenty of protests, but there have been these at many points in the last decade. There hasn’t been a broad-based social movement affecting multiple cities like there was in 1989. And it is hard to compare any of the efforts Washington has made to pivot in Asia to the sort of cause for a backlash provided by the Belgrade Embassy bombing.

Third, what is particularly dispiriting to me about this current move is precisely its lack of a tangible obvious cause. This makes it seem part of an unpleasant “new normal” for the PRC, in which any excuse can be used to justify a tightening of control. Prior to the Olympic year of 2008, the basic pattern seemed to be of a gradual loosening of the Party’s hold over many features of cultural life, mixed with a continued monopoly on formal power by the old men in Beijing. There were occasional slides backward toward greater rigidity, but the trends seemed to be promising. No more.

What we have seen since then is a series of invocations of the need for increased “vigilance” to ensure stability at a special moment. The lead-up to the Olympics was one such moment; then it was the coming of the 2009 anniversaries (both the dangerous ones, such as that of the Tiananmen struggle, and the allegedly glorious ones, such as the 60th birthday of the country); and after that, it was described as crucial to maintain control so that the 2010 Shanghai Expo went off with a hitch. 2011 brought with it an expected excuse for “vigilance” (the run-up to the Party turning 90), as well as an unexpected one (fear that the revolutionary whiff of Jasmine would waft from the Middle East to the Middle Kingdom).

What is troubling about the latest speeches calling for renewed vigilance is that they suggest that the pattern won’t be ending again this year. There’s yet another excuse being offered, of course: the need to ensure an orderly transition in the fall from Hu and company to Xi and company. At some point, with restiveness spreading to different segments of the population and a boom that can’t continue forever, the Party will need to start thinking more creatively about how to reposition itself. For now, it is just sticking with the increasingly tired Olympic year playbook.

We could call Hu’s speeches part of the dialog from Remain Vigilant in the 21st Century: The Fifth Chapter. The Chinese Communist Party may claim to stand for values antithetical to those of Hollywood, but at the moment it seems to share the big studios' fondness for churning out sequels of played out franchises that are well past their sell-by date.