What Facebook Does — And Doesn't — Tell Us About Myanmar 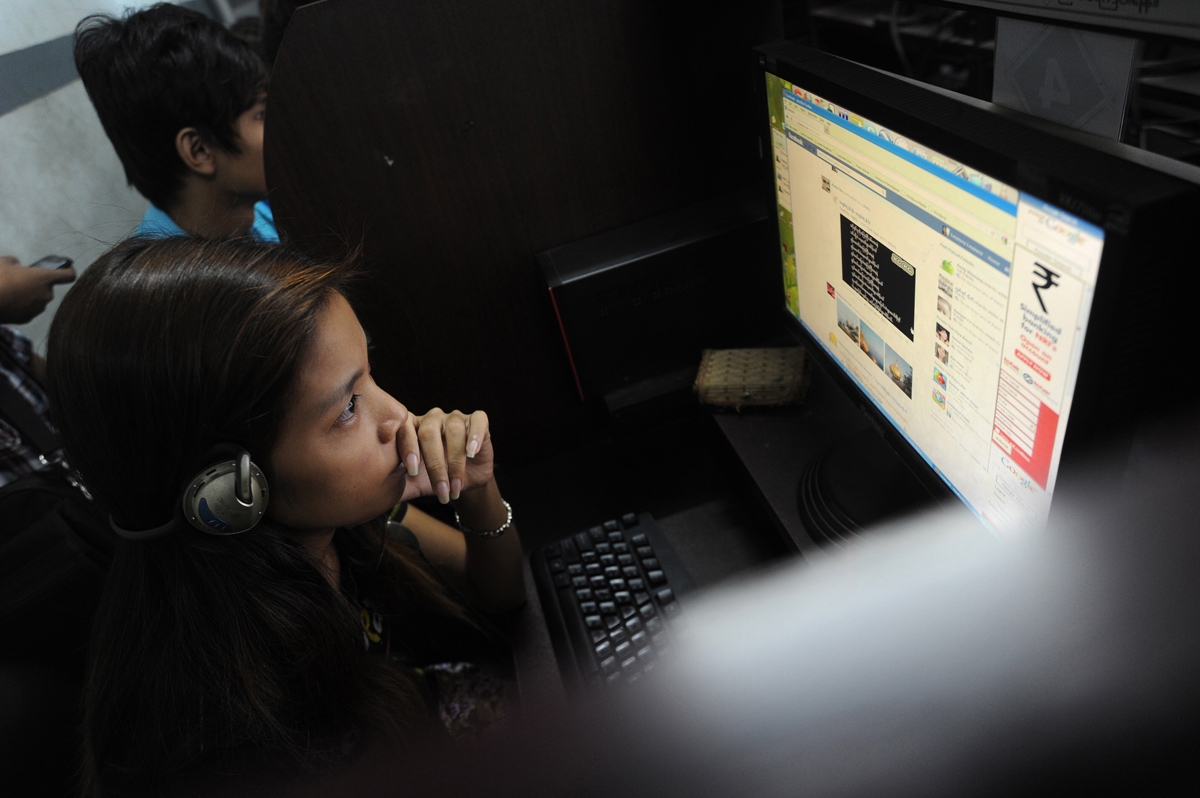 Internet connectivity has exploded in Myanmar in recent years — but it has failed to overturn previous problems. (Soe Than Win/AFP/Getty Images)

Last fall, as hundreds of thousands of Rohingya fled Myanmar in the wake of brutal state persecution, soldiers selected 10 men at random from a camp of displaced people and murdered them. Wa Lone and Kyah Soe Oo, reporters from Reuters' Yangon bureau, pieced the story together. Their report recounted the killings in chilling detail, providing an extraordinary glimpse into an ethnic cleansing campaign that has attracted widespread international condemnation. But by the time the story was published in February, the two reporters were in prison, having been arrested that previous December for "illegally acquiring information with the intention to share it with the foreign media." Their sentence — 14 years — is longer than those given the murderers that they investigated.

Improved telecommunications and media freedom, rather than help Myanmar move beyond its problems, have instead broadcast them to a wider audience.

Neither ethnic violence nor the persecution of journalists is new to Myanmar, a Southeast Asian nation struggling to emerge from decades of poverty, military rule, and isolation. But the story of the two reporters, whom Asia Society honored in absentia last month with the Osborn Elliott Prize for Excellence in Journalism on Asia, encapsulates much about the current state of the country. In the past decade, political and economic reforms — combined with the arrival of widespread internet connectivity — sparked optimism that Myanmar could soon mature into a prosperous democracy with a robust, free media. Instead, global attention has turned to the plight of the Rohingya, a stateless Muslim population whose treatment by Myanmar's military has led to comparisons to genocide. A decade after Myanmar's leaders began tentative steps toward reform, the country now occupies a precarious position, caught between a hopeful future and the resumption of pariah status. Improved telecommunications and media freedom, rather than help Myanmar move beyond its problems, have instead broadcast them to a wider audience.

For decades, Myanmar was one of the world’s most technologically stalled, isolated countries, a resource-rich land governed by a repressive military dictatorship. By the end of 2013, fewer than 13 percent of the Myanmar population had cell phones, while just over one percent had access to the internet — figures akin to North Korea. But the following year, when Myanmar's government awarded Qatar's Ooredoo and Norway's Telenor contracts to build a nationwide cellular network, connectivity accelerated rapidly. The price of a SIM card dropped from around $1,500 to less than $2, and a flood of cheap Android smartphones entered the country. The change has been sudden and drastic: According to Telenor, Myanmar now boasts 105 percent SIM card and 80 percent smartphone penetration.

The sudden telecommunications revolution in Myanmar coincided with a relaxation of censorship, as the country’s ruling generals took steps to liberalize the country. Obtaining a license to operate a media organization became easier, and newspapers, magazines, and television stations no longer had to censor themselves as carefully before publishing investigative journalism. The policy change freed existing news organizations to pursue stories more aggressively and encouraged new players to enter the market.

One company soon became dominant: Facebook. The Menlo Park, Calif., based social network is, for all intents and purposes, the internet in Myanmar: An estimated 85 percent of all web traffic flows through Facebook’s walled garden, and more than a third of Myanmar’s 50 million-plus population receives their news through the site. According to The Washington Post, more people in Myanmar have access to Facebook than they do to electricity.

At first, Facebook’s role in Myanmar’s society seemed to spur, rather than inhibit, democratic change. Local political parties relied on Facebook to coordinate attendance at rallies and to coordinate protests against unpopular government policies. And when Aung San Suu Kyi’s National League of Democracy gained control of Myanmar’s civilian government in historic 2015 elections, the Nobel Peace laureate credited Myanmar’s new connectivity with an assist. "Everybody gets onto the net and informs everybody else of what is happening," she said in an interview with BBC. "And so it’s much more difficult for those who wish to commit irregularities to get away with it."

But Facebook’s role as Myanmar’s near-universal media platform did far more than expose government irregularities. It has also spread hate speech and incited violence. Consider Ashin Wirathu, a charismatic Buddhist monk whose antipathy toward the Rohingya population once earned him the moniker "the Buddhist bin Laden." For years, Wirathu’s vitriol failed to attract a wide following. But once he established a Facebook page, which he used to spread anti-Rohingya news and propaganda — much of which was untrue — to his hundreds of thousands of followers, Wirathu’s influence spread rapidly. The utility of Facebook did not escape him.

"Social media is much better than using town criers," he told Wired. "If I give a sermon, even people who cannot attend it can hear my message. Now I have thousands of followers."

The popularity of anti-Rohingya propaganda combined with the frictionless nature of Facebook’s platform meant that legitimate news organizations struggled to gain traction in Myanmar’s marketplace of ideas. Government officials unsympathetic to the Rohingya dismissed media reports of atrocities as "fake news," diluting their capacity to shape readers’ beliefs. In a country without an enduring tradition of a free press, Myanmar’s information sphere became a Facebook-hosted free-for-all.

"You had a society that transitioned so quickly that there weren’t enough watchdogs and hard-hitting journalists who actually knew journalistic ethics," said Debra Eisenman, managing director of the Asia Society Policy Institute, and author of "Reconciling Expectations With Reality in a Transitioning Myanmar," a new issue paper on Myanmar. "People carried the conversation on social media and 'alternative facts' became real violence."

Facebook’s role in spreading fake news and hate speech in Myanmar has turned into a public relations nightmare for the company. In March, the chairman of the UN Independent International Fact-Finding Mission on Myanmar blamed Facebook for worsening the country’s violence, telling reporters that the social network had "substantively contributed to the level of acrimony and dissension and conflict, if you will, within the public," and stating that Facebook "had turned into a beast." Mark Zuckerberg, Facebook’s CEO, acknowledged regret with how his company was used in Myanmar, while other top executives admitted to "losing sleep" over what the technology had wrought there. In 2017, the company withdrew its "Free Basics" service, which provides a Facebook-centric internet without data cost to users, in Myanmar. But the damage was done.

Attributing much blame for Myanmar’s situation to Facebook, though, elides the intractable nature of the ethnic conflict in the country, one that has engaged in civil warfare for practically the entire duration of its independence. The military, which is not under the oversight of the civilian government, and is dominated by ethnic Bamar (the ethnic majority in Myanmar), has waged war against nearly two dozen ethnic armed organizations for decades. The Rohingya's own struggles to co-exist with Myanmar's majority are not new. Last year’s mass exodus to Bangladesh was not the first time the Rohingya fled Rakhine State ahead of state violence — similar campaigns occurred in 1978 and 1991. But Myanmar’s isolation — and a lack of modern technology — meant that these instances failed to resonate as much internationally.

The case of the jailed reporters also reveals that the problem for Myanmar’s journalists is less competition from social media but rather something more familiar: repression from the state. Media freedom in Myanmar has certainly improved since the days when the country joined North Korea and Somalia near the bottom of world rankings — but journalists remain subject to arbitrary detention. Reforms aside, insidious forms of censorship remain — particularly with the sensitive issue of the Rohingya. At the Asia Society ceremony honoring the two imprisoned reporters, veteran Myanmar reporter Lawi Weng explained that the country’s government required journalists reporting on the Rohingya to obtain an official quote before they could publish any account of atrocities they encountered in Rakhine. It’s a simple enough request — but one, Weng explained, the government managed to circumvent. "You’d call morning and night," he said, "but they’d never answer the phone."

"We created a saint but the saint has become a politician — and we don’t like that."

Myanmar’s journalists also contend with a majority population largely unsympathetic to the cause of the Rohingya. Many in Myanmar take issue with the idea that the Rohingya are a unique ethnicity at all — rather, they consider them Bengalis who are illegal immigrants. Buddhist monks with Facebook accounts stoke anti-Muslim sentiment to target the Rohingya — but this hardly makes them unique, as anti-Rohingya sentiment is widespread throughout Myanmar society. Caught in between is Aung San Suu Kyi, whose refusal to condemn the treatment of the Rohingya has tarnished her once-pristine international reputation. Suu Kyi’s silence on the issue aligns her with the prevailing sentiment of the much of the population, whom her party has been elected to represent. Kofi Annan, the former U.N. Secretary-General, told The New York Times that “we created a saint but the saint has become a politician — and we don’t like that.”

Expecting that, after six decades of near-total neglect and isolation, Myanmar would transform into a thriving democracy overnight was never realistic. As Eisenman writes in her issue paper, corruption, poor infrastructure, and red tape have deterred investment, and Myanmar citizens often lack sufficient access to credit to launch businesses. The military still exercises considerable control over the country’s political system, reserving 25 percent of all parliamentary seats for itself and exercising management over an array of functions, like tax collection, that might usually come under the jurisdiction of an elected government. In addition to the still-ongoing civil conflicts with ethnic armed organizations on the country’s periphery, Myanmar also suffers from rampant opium production and vulnerability to natural disaster. Placing too much emphasis on Facebook — or the media writ large — oversimplifies the nature of the Myanmar's problems, which result from a complex set of factors that include but are not limited to military atrocities against the Rohingya.

The recent history of Myanmar’s media does, however, succeed as a cautionary tale about the limits of Facebook, and internet technology, to alter fundamental political, social, and economic conditions in a country still climbing out of a decades-long rut. Few can argue that Myanmar was better off when the price of a SIM card equaled seven times the country’s per capita income and Aung San Suu Kyi languished under house arrest. A key, then, is to manage expectations of how quickly Myanmar can realize its potential.

"To aid in the plight of all those in Myanmar, including the Rohingya, we must turn our attention to the country’s myriad interconnected challenges, reconcile expectations with the present reality, address drivers of conflict, and support baby steps toward just and inclusive solutions," Eisenman wrote.