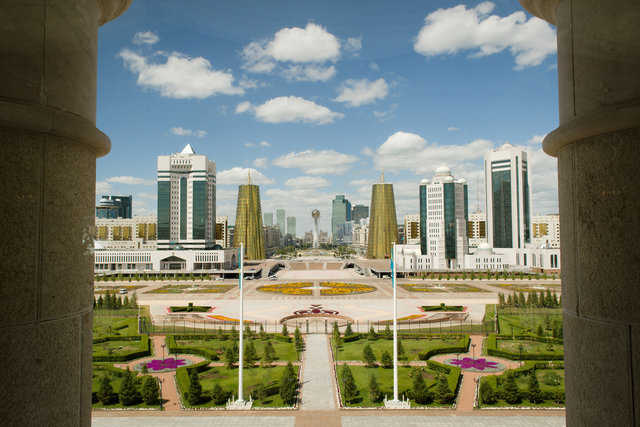 The view from the Presidential Palace in Astana, Kazakhstan. (Leon Neal/AFP/Getty Images)

Guardian Cities traces the growth of Astana, which has been the capital of Kazakhstan since 1997, and investigates the political undercurrents behind the city’s rapid rise.

Why Pakistan Is Replacing English With Urdu
Aditya Agrawal | TIME

Pakistan is dropping English as its official language and switching to Urdu. Ahsan Iqbal, Pakistani Minister of Planning, National Reforms, and Development, discusses the rationale behind the change, noting it will “help provide greater participation to people who don’t know English, hence making the government more inclusive.”

In 7 Years, India Will Surpass China in Population: UN
Times of India

The United Nations announced on Thursday that India is expected to surpass China as the world’s most populous nation by 2022, six years earlier than previous projections.

Watch a beautiful drone movie filmed in the islands of Japan’s Kagoshima prefecture.

See how Davaa Magvansuren, a Special Olympics runner from Mongolia, got the chance to attend school after her parents moved to new province.

Nepal, Three Months After the Earthquake
Alan Taylor | The Atlantic

“The DPRK [Democratic People’s Republic of Korea] will not become the next Malibu but it receives enough swells to sustain a vast surf community.”

- International Surfing Association representative Nik Zanella, an Italian who coaches Chinese surfers and is planning a surfing expedition and training camp in North Korea this September [The Guardian]

86.83 – The average life expectancy for women in Japan, #1 in the latest world rankings [The Japan Times]

81.17 – The average life expectancy for men in Hong Kong, #1 in the latest world rankings [The Japan Times]

8 – The percentage drop in the Shanghai Composite index on Monday, China’s biggest one-day fall since 2007 [Reuters]

37 – The age in years of Hong Kong's Jia Jia, who became this week the oldest-ever panda to live in captivity [Shanghaiist]