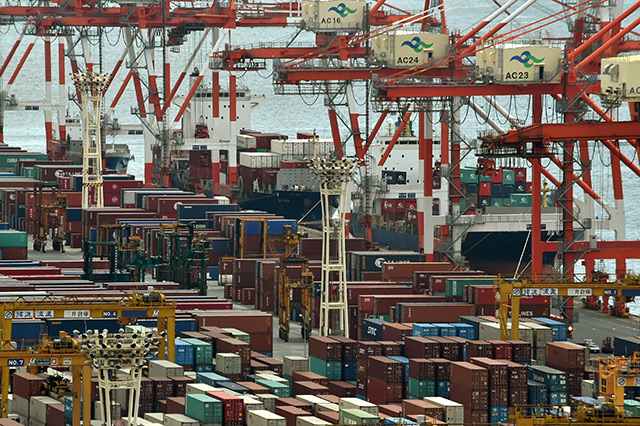 Gantry cranes and shipping containers are seen beside a vessel at the cargo terminal area of Tokyo port on October 6, 2015. Japanese Prime Minister Shinzo Abe hailed a deal to create the world's largest free trade area October 6 as the start of a 'new century' for Asia, and expressed hope China might one day join the historic accord. (Kazuhiro Nogi/AFP/Getty Images)

North Korea at 70
The Guardian

North Korea has declared this upcoming Saturday a national public holiday to mark the 70th anniversary of the founding of the Korean Workers’ party, which has governed the state without opposition since its inception. Leading up to the anniversary, The Guardian is publishing a three-day series exploring various aspects of life inside the country.

To Be or Not to Be: The Great Firewall of Thailand
Adam Ramsey | Al Jazeera America

Thailand’s government is considering “consolidating all [Internet] gateways into one central government-controlled point.” Known as “The Great Firewall of Thailand,” the proposal would make it easier for the government to monitor the flow of information. In the meantime, advocacy groups and other voices of opposition have emerged.

Under new President Maithripala Sirisena, Sri Lanka’s government has shifted its foreign policy, renewing its relations with India and the United States while drifting away from China’s sphere of influence.

Photographing Japan, Through Shadows of the Past
Maurice Berger | New York Times

The first American survey of photographer Ishiuchi Miyako highlights her depiction of the “fortitude … of postwar Japan.”

Photographer Probal Rashid documents the challenges facing Bangladesh, one of the countries in the world most vulnerable to the effects of climate change.

Geologist, explorer, and environmental activist Yang Yong’s expedition to the source of the Yangtze River traces the effects of climate change on the Tibetan plateau.

“When more than 95 percent of our potential customers live outside our borders, we can’t let countries like China write the rules of the global economy. We should write those rules, opening new markets to American products while setting high standards for protecting workers and preserving our environment.”

$28.1 trillion — The combined GDP of all nations under the TPP deal announced this week [Fortune]

12 — The number of member countries in the TPP [Quartz]

16 — The number of members in the RCEP (Regional Comprehensive Economic Partnership), a free trade agreement being negotiated by China [Quartz]