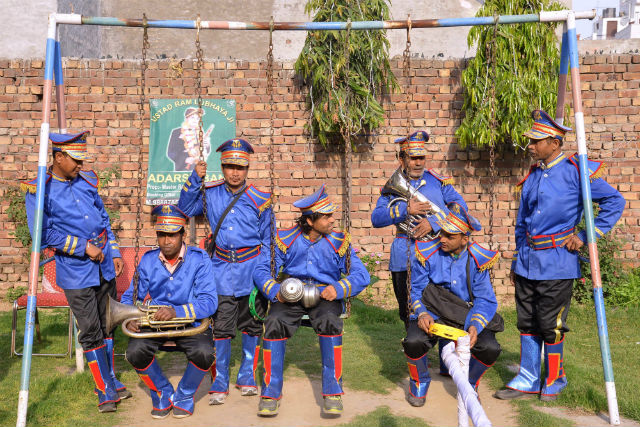 Members of an Indian wedding band gather on swings as they wait for a religious procession at a garden in Amritsar on April 12, 2015. (Narinder Nanu/AFP/Getty Images)

How is the Internet transforming India’s concept of marriage? Marriage websites have led to the rise of ‘semi-arranged’ marriages, in which technology has “played matchmaker, helping whittle away at an ancient tradition, but with a particularly Indian twist.”

Taxi driver Teng Jiazhi has taken 30,000 selfies with passengers over the last four years and has gained more than 100,000 Weibo followers in the process. Known by fans as Brother Smile, Teng says, "I try my best to help my passengers with their troubles. All it takes is just a little chat, song or joke to make them happy again."

Before the Khmer Rouge regime, pop music experienced an explosion in Cambodia for 20 years, incorporating musical influences from around the world. “There were dance halls in Phnom Penh, and big band music and crooners were very popular in the '50s,” says filmmaker John Pirozzi in an NPR interview.

Making Perfume From the Rain
Cynthia Barnett | The Atlantic

Long known for their mastery of ancient perfumery, the villagers of Kannauj in Uttar Pradesh, India, have also found a way to bottle the fragrance of monsoons. Environmental journalist Cynthia Barnett recounts her trip to Kannauj on the eve of the monsoons to witness the perfume-making process.

At just over 600km/h (373mph), Japan’s maglev train has again broken the world speed record just days after breaking a previous 12-year-old record. Read about the feat, then scroll dowm for an infographic on how the maglev train works.

With a reunion in the United States, another chapter was added to the unexpected “bromance” between Buzzfeed writer Matt Stopera and “Brother Orange” from Meizhou in Guangdong, China, complete with an appearance on The Ellen Show.

North Korean leader Kim Jong Un reportedly completed a climb to the peak of Mt. Paektu last weekend. Check out a collection of photos from the excursion, which included a group of elite North Korean Air Force fighter pilots.

“Climbing Mt. Paektu provides precious mental pabulum more powerful than any kind of nuclear weapon, and it is the way for carrying forward the revolutionary traditions of Paektu and giving steady continuity to the glorious Korean revolution.” — Kim Jong Un, in a quote from the North Korean state media [Mashable]

$46 billion – The amount of Chinese investments on infrastructure and energy projects in Pakistan, according to a plan announced on Monday [Reuters]