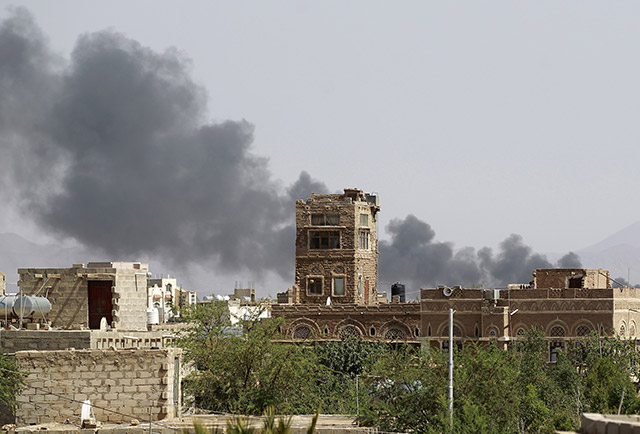 Smoke billows following air-strikes by the Saudi-led coalition on a weapons depot at a military airport, currently controlled by Yemeni Shiite Huthi rebels, in the capital Sanaa on August 20, 2015. (Mohammed Huwais/AFP/Getty Images)

Read about how Indonesia’s burgeoning smartphone industry — and particularly, its mobile gaming market — is creating opportunities to save the country’s diverse wildlife.

Amidst Beijing’s recent economic woes, Chinese migrant workers are abandoning the city for the country. The trend could speak to long-term trajectory of China’s economy. Tom Phillips reports from Nanqijia, a “recycling village” in Beijing.

93-year old Huang Yung-fu from Taichung County in central Taiwan is known locally as “Rainbow Grandpa.” Read about his efforts to save his military dependents’ village by painting vibrant murals.

The Unthinkable: An Ancient City Plunges Into Darkness as a War on Civilians Rages
Alex Potter | NPR

In a photo essay, Alex Potter takes an inside look at Sanaa, Yemen, which has become a battleground marked by destruction and humanitarian crisis.

In 2012, photographer Mustafah Abdulazi undertook a project to document water focusing on conservation and health issues, with the goal of visiting 32 countries. He visited China’s Yangtze River in the spring of 2015.

“I would not be throwing him a dinner. I would get him a McDonald’s hamburger and say we’ve got to get down to work because you can’t continue to devalue.”