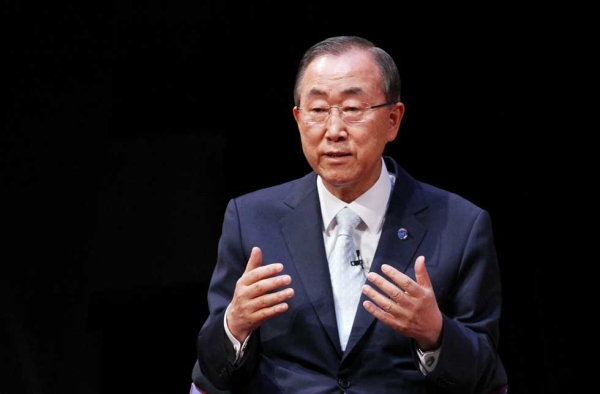 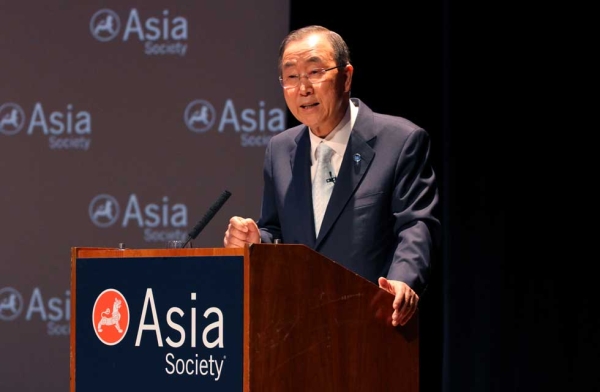 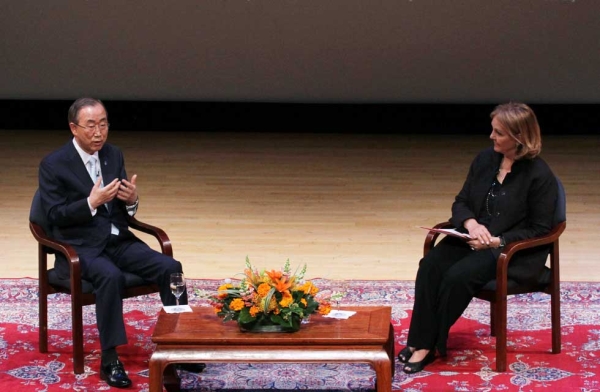 With no sign of an end to the Syrian war, and the specter of full-blown sectarian conflict now looming in the region, UN Secretary-General Ban Ki-moon called for the Security Council to impose an arms embargo on Syria, as part of a six-point plan to deal with the crisis and the humanitarian horrors it has produced.

"We must act," the Secretary-General told an overflow crowd at the Asia Society's headquarters in New York. "All the values for which we stand, and all the reasons for which the United Nations exists, are at stake, here and now, across the devastated landscape that is Syria today."

That "landscape" now includes parts of Iraq as well, a point Ban stressed several times in an hour-long speech and question-and-answer session with Asia Society President Josette Sheeran. The march of Syrian-based insurgents across Iraq now threatens "the cohesion and integrity of two major countries, not just one," the Secretary-General said. "Developments in the past few days make it all too easy to imagine a spiral of attack and reprisal not seen in Iraq since 2006 and 2007."

The call for an arms embargo was among the most aggressive policy prescriptions the Secretary-General has put forward for Syria, and it comes fraught with difficulty. Flows of money and weaponry are diverse, borders with virtually all Syria's neighbors porous, and — from a political standpoint — an embargo would cement in place a military edge for the Syrian regime. "I recognize that an embargo would risk freezing an imbalance in place, given the extent and capacity of the Syrian government’s weaponry," Ban said. "But the Syrian war cannot be won by military means. The sides will have to sit across from each other again at the negotiating table. The only question is how many more people must die before they get there?" He called on Syria's neighbors to block land and air deliveries of weapons, and called on Saudi Arabia and Iran to "build bridges that promote calm and reconciliation."

While he acknowledged the Syrian government's military advantage, the Secretary-General took issue with the notion that Bashar al-Assad was winning the war itself. "I reject the current narrative that the government of Syria is 'winning'," Ban said. "Conquering territory through aerial bombardments into densely populated civilian neighborhoods is not a victory. Starving besieged communities into surrender is not a victory. No one is winning; no one can win."

The Secretary-General's other proposals involve diplomacy and humanitarian relief: the resumption of a "serious political process" and addressing the "regional dimensions of the conflict, including the extremist threat"; unfettered access for humanitarian aid, which he said had been blocked by Syrian government bureaucracy and "sieges" carried out by the regime and rebels alike; completing the destruction of chemical weapons in Syria (Ban said 92 per cent of Syria's chemical weapons have been destroyed or removed from the country); and an assurance that any war crimes in Syria would be fully prosecuted. "The Syrian people," he said, "have a fundamental right to justice. The United Nations and its Member States have a duty to defend that right."

Left unaddressed was a question that has vexed policymakers throughout the Syrian crisis: how the Syrian leader, Bashar al-Assad, would be drawn into any fresh political process, particularly if the specter of war-crimes prosecution loomed. Many observers say that given Assad's recent gains on the ground, and his re-election (however tainted by fraud), it is difficult to see what would entice him to the negotiating table, much less to make concessions. As if to counter such skepticism, the Secretary-General criticized what he called "the cold calculation that seems to be taking hold that little can be done except to arm the parties and watch the conflict rage."

Ban also said he would soon name a new UN envoy for Syria. His last envoy, Lakhdar Brahimi, left the job last month, blasting the international community on his way out for failing to deal with the Syrian crisis and warning that Syria risked becoming "another Somalia." For his part, Ban stressed that his new envoy "will not be able to wave a magic wand."

The Syrian conflict — born of a push for greater freedoms in the early days of the so-called "Arab Spring" — has raged for more than three years. More than 150,000 people have been killed, nearly half the population of 22 million has been displaced, and the war itself has now spilled into Iraq. This week a report to the UN Human Rights Council warned that "a regional war in the Middle East draws ever closer." Thus far, meaningful action — beyond tending to Syria's refugees — has eluded the international community.

"It did not have to be this way," Ban said in his speech. "In 2011, when some thousands of Syrians went to the streets, and peacefully, and filled the squares of Daraa and elsewhere in Syria, they were not calling for regime change. They were calling 'hurriya,' 'freedom.' They were not staging any revolutions. They just wanted reforms after many decades of dictatorial and authoritarian regime."

Speaking in the auditorium of the Asia Society — an institution devoted to arts and culture as much as global policy — Ban finished on a cultural note.

"Not long ago, I participated in the opening of the renovated Islamic galleries at the Metropolitan Museum of Art. A great many of the treasures were from Syria and Iraq. I was inspired by their long civilization. At the same time, I was deeply saddened to think of the suffering those countries and peoples are experiencing today, and of the destruction of thousands of years of cultural heritage in just a few years of violence. Let us recognize the unimaginable suffering that abounds today; and work together now to build a better future for the people of Syria."