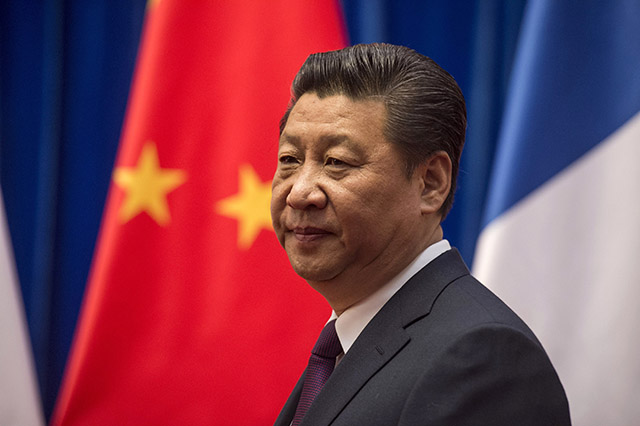 Chinese President Xi Jinping at the Great Hall of the People on January 30, 2015 in Beijing, China. (Fred Dufour/Getty Images)

Since coming to power in late 2012, Chinese President Xi Jinping has been the subject of fawning cartoons, books, oil paintings, action figures, commemorative plates and even a musical homage to the love he has for his wife. This obvious break from the mold of his post-Mao Zedong predecessors has drawn suspicions that "a growing cult of personality" is being built around the man known by some as Big Daddy Xi. After a performance at this year’s CCTV New Year’s gala, those suspicions will likely persist.

The annual event, which organizers claim reaches 90 percent of Chinese families and more than 700 million viewers, is a collection of performances and skits that are tightly choreographed and vetted by the Communist Party. Toward the end of this year’s broadcast on February 18, singers Mo Hualun and Lv Wei joined a university choir to sing a new song entitled “Give My Heart to You” in an effusively patriotic tone that’s long been typical of the gala. Less typical, however, is what happened a minute into the performance when a waving Chinese flag in the background video gave way to triumphant imagery of the president.

The remainder of the performance is devoted exclusively to video of Xi that includes him meeting ecstatic youth, glad-handing with rural residents, and eating with soldiers in a frigidly cold outpost. While similar flattering imagery of top leaders has long been a mainstay of CCTV news broadcasts, it's rare that this imagery is brought together in such a musical montage at a high-profile event like the New Year's gala. The song itself appears directed at the Chinese “motherland” as a whole, though the way Xi is presented center stage leaves it ambiguous who exactly the source of love is and who it is directed at.

Watch the performance yourself in the video embedded below (we've translated the lyrics beneath it) and let us know what you think in the comments.

《把心交给你》
"Give My Heart to You"