Watch: Analysts Describe BJP's Big Win as a Call for Growth and a Rejection of the Left | Asia Society Skip to main content

Watch: Analysts Describe BJP's Big Win as a Call for Growth and a Rejection of the Left 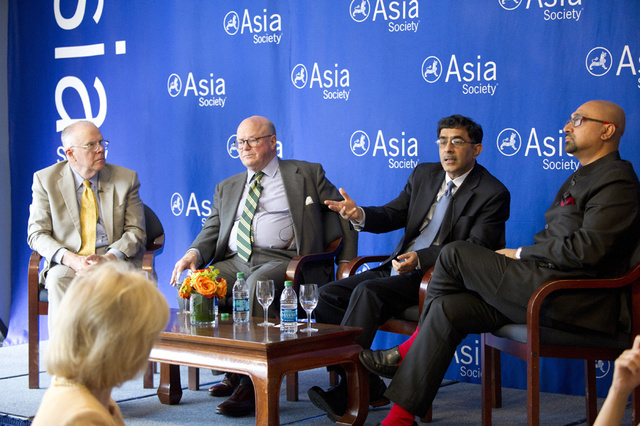 Just days after India’s voters handed Narendra Modi and the Bharatiya Janata Party a decisive victory in the country’s national elections, veteran India observers gathered for a wide-ranging panel discussion on what the win might mean for India’s domestic politics and its economic and foreign policies.

Devesh Kapur, director of the Center for the Advanced Study of India at the University of Pennsylvania, credited Narendra Modi's broad appeal for the BJP’s resounding victory.

“I have no doubt that his role was absolutely singular,” Kapur said, noting that the BJP had managed to win in Indian states such as Tamil Nadu and West Bengal where it had no base. “Modi managed to bridge three of India’s four main political cleavages: class, caste, and region.”

The one such cleavage that Modi did not address, Kapur noted, was religion: “Muslims are apprehensive” about how they will fare after Modi is sworn in as prime minister.

Bobby Ghosh, World Editor at TIME magazine, noted that none of the BJP’s 280-plus winning candidates for the Lok Sabha (lower house of parliament) is Muslim. “This is not an inclusive stance.”

Ghosh interpreted Modi’s win as an “anti-incumbency vote as well, for the Indian left.”

“Nothing prepared me for just how badly the left has done,” Ghosh said. He commented that this will create “the absence of a voice speaking for the left,” which until the recent election had been valuable to India’s political discourse.

“India risked becoming increasingly divided along regional lines,” Wisner said. “This election puts paid, for the moment, to that drift in Indian politics.”

Vani Tripati, a BJP spokesperson who offered brief comments before the panel, credited the BJP’s big win to its ability to address the aspirations of India’s young voters: the nearly two-thirds of the country under the age of 40, many of whom were voting for the first time in this election.

“The biggest problem that youth face today is jobs,” Tripati said. Modi’s “first job will be to bring back the faith of the young” in the government’s ability to drive growth.

Wisner also viewed the election results as a call for the renewal of India’s stalled economic growth.

“India’s voters have said, ‘Let’s give growth policies a chance,’” Wisner commented. “Growth needs to provide equity, but you can’t get equity if you don’t have growth.”

“Modi ran on a platform of greater decisiveness and efficiency,” Ghosh said. “Conveniently for him, the system is so corrupt that real gains in that area could lead to substantial benefits. I’d be watching very closely how much he takes on corruption – it’ll play right into his wheelhouse.”

Kapur recommended that observers should look at the national budget, due in July, for more clues as to how the Modi government would administer its economic agenda.

“I think we’ll see a shift in government spending from consumption to investment,” Kapur said.

In its foreign relations, the panelists said, Modi faces a number of pressing issues and open questions.

Wisner said that despite an “instinct to give economics priority,” Modi will be unable to escape “three big issues” in foreign policy: China, Pakistan, and the aftermath of the Afghanistan war.

Kapur predicted that Modi will make efforts to strengthen India’s relationship with Japan above other countries.

“Japan is really petrified of China and now has serious investments on the anvil,” Kapur said in describing their interest in new alliances. A closer relationship with Japan would be “exactly of the type that Modi loves,” with new investments in infrastructure at its core.

As for India’s relationship with the U.S., Wisner said he expected Modi to take a pragmatic approach rather than hold a grudge against the U.S. for refusing to grant him an entry visa—but that the U.S. will need to make a good-faith effort to show confidence in him.

“The denial of the visa is a fact—it can’t just be wished away. It’s going to take more careful management and attention to the relationship to overcome some of that pain,” Wisner said. “We need to work on this relationship, and not assume that the job is all Modi’s to do.”

Kapur said he regarded Modi as a product of “a social churn that’s going on in India which is absolutely unprecedented historically” and argued that a man with Modi’s background faced long odds of ever reaching the Prime Minister’s seat.

Added Ghosh: “In the last 40 years, politics has been the one place here the dispossessed of India’s society can successfully direct their entrepreneurial instincts.”