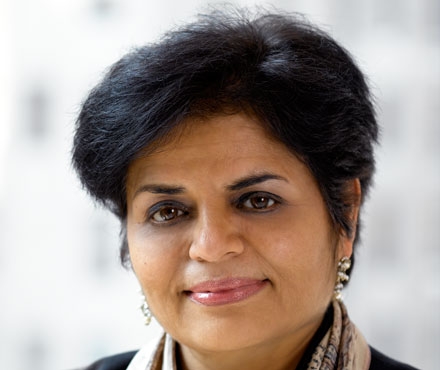 Which books best speak to the changing role of Asia's women? Asia Society President Vishakha Desai was asked to recommend the best five books in her view, by our friends at The Browser. Following are some excerpts from her interview; click here to read the full piece.

1. May You Be the Mother of a Hundred Sons: A Journey Among the Women of India by Elisabeth Bumiller

"What I find so compelling about it is the way Elisabeth Bumiller creates these personal stories. It's about women and how they get caught up in being seen as mothers, and especially mothers of sons. This made a big impression on me when I first read it, and I still feel that it's a very important issue. Even when you're looking at corporate India today, there’s a huge number of educated women who are going into the workforce. They have high ambitions, but once you have a child, if you want to pursue a serious career — especially if it's a professional career and not just taking care of a family business — the social stigma is still huge. Even at the top level. That's why I like this book. And she writes beautifully, of course — all of these books are by people who write really well."

2. Dear to Behold: An Intimate Portrait of Indira Gandhi by Krishna Hutheesing

"Dear to Behold is a book I read long ago, but I still think about it. It's a small book. It was written by Indira's aunt, Krishna Hutheesing [Nehru's sister]. What’s interesting to me is that it really gets at the psychology of Indira Gandhi. For example, when she's young — the loneliness, the shyness, how that then plays out. The book was written before the [state of] emergency she declared in the mid-1970s. It really creates, from the inside out, a portrait of a woman who then became a very powerful leader. It gives you a nuanced understanding of who Indira Gandhi was and what made her do the things she did. I found that appealing. I read it in the mid-1970s, when I was myself a youngster. It was at the height of the emergency and I was already in the US. But it made an impression on me and I've gone back and reread it several times, to think about leadership models."

3. Songs of Blood and Sword by Fatima Bhutto

"This, again, is a book written from the inside about a family, in this case the Bhutto family. Fatima is Benazir Bhutto's niece. Both her father and her uncle were killed. What I like about the book is that, again, it's very well written. It is unflinching in terms of exploring the family dynamic. At the same time, it really gives you an insider's perspective on, in this case, a very feudal family — how the family really rule the country. Fatima is very young. She’s a very courageous woman, to write this book."

Shop AsiaStore for Songs of Blood and Sword by Fatima Bhutto

"To me Wild Swans is one of those iconic books for understanding the generations of Chinese women. She is from this amazing intellectual family and it's about what happens to them. The book just has this tremendous power. It's an amazing journey. It's about what women do to survive and also how they suffer .... We did a show about the Cultural Revolution here at the Asia Society. One of the things you find out is that the Cultural Revolution gave a sense of equality to women that they never had before. That doesn't mean it's going to stick across the board, but at least it's expected that women are going to be educated, it's expected that women are going to work. That's a really dramatic change that took place in less than 100 years — a huge change between pre-1949 China and post-1949 China."

"The reason I consider this a really important book is that, first of all, until this anthology, we've never had anything like it. Secondly, there are just amazing pieces of writing — poetry, narratives, fiction — in it. It's important just to recover that female voice that none of us ever studies in school. We were given a couple of names [of female writers], but that was about it. I think it's a terrific piece of scholarship. It reminded me of that famous Linda Nochlin essay, 'Why Have There Been No Great Women Artists?' It’s not that they're not there; it's just that no one talks about them."

Good choices? Got your own recommendations? Sound off in the space below ...