Video: A Young Filmmaker's Journey from Small-Town Sichuan to the Oscars

Video: Highlights from the conversation between documentary filmmaker Mu Zijian and Bin Ouyang of the Center on U.S.-China Relations at Asia Society New York. (4 min., 53 sec.)

“Before the earthquake her home was on the sixth floor. But now the sixth floor is the third floor; the first, second, and third floor are in the ground,” says Mu Zijian of the destruction of Yangjian Fen’s home in the wake of the 2008 Wenchuan earthquake in northern Sichuan.

Mu is the 26-year old director of the documentary One Child, which was filmed mostly in 2012 around the four-year anniversary of the disaster that razed whole towns. Beichuan in the Qiang Autonomous County is one of those towns. Nearly half of the original 40,000 inhabitants perished in 2008.

Among the many lost was Yangjian Fen’s young daughter. Mu followed Yangjian Fen as she walked through the now-abandoned old Beichuan. Old Beichuan is located several miles away from new Beichuan, where construction was finished only three years after the earthquake. Access to old Beichuan is prohibited, but with Mu's encouragement Fen worked up the courage to climb over the fence to see her old home and reflect on how her life has changed since the earthquake.

“After she came home she said that she thought it was the right thing to do — to go back. People always want to forget the past and focus on the future,” said Mu. “A lot of people are making documentaries to deal with political issues. Of course, these things require our attention. We can’t forget an event that has had such a profound impact on our country. We are still very good at forgetting, but then a few brave people need to keep reminding us.”

Mu was speaking on November 4, 2014, at the most recent 725 Salon, an ongoing series of Chinese-language programs at Asia Society Park Avenue headquarters. Nearly 50 New York-based Chinese nationals attended the screening of One Child, and erupted into applause even before the closing credits began to roll. The crowd’s enthusiasm was only the latest outpouring of praise for this young man who himself hails from Beichuan.

Following the screening, Mu joined Bin Ouyang, Assistant Director of Asia Society's Center on U.S.-China Relations, for a Q&A. After the event, New York-based film curator Lesley Qin said of Mu’s work: “I’ve attended several screenings of this film and this one, together with the Q&A section, is by far the best. When it comes to questions about life and death, it’s really difficult to put them into words.” 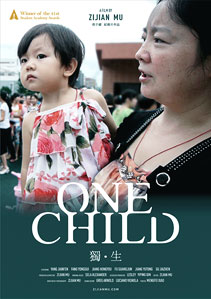 Mu's documentary explores the impact of China’s one-child policy on a citizenry devastated by the 2008 Wenchuan earthquake. Mu followed the lives of several parents who struggled to rebuild their lives in the wake of losing their only child.

The filmmaker said of Yangjian Fen’s story: “Some parents could have tried to have another child, but there are some parents who can’t. They’ve become forgotten. If you don’t have any children then everyone will feel sorry for you. But nobody can help you. So, whenever she visits other people she is reminded that other families do have children. Before the earthquake all families were the same. Just after the earthquake everyone was the same too. Everyone was equally miserable. … However, after a couple of years people’s lives became very different. She couldn’t have another child so she felt really ashamed. She felt very uncomfortable. She had a hard time dealing with it. She stayed home a lot and so it became clear that there was a tension between these two groups of people.“

As Fen and many other parents come to terms with this terrible loss, the film gives viewers an opportunity to consider the broader social consequences of the one-child policy — namely, the plight of parents all over China who, after the death of their only child, are left without a generation to follow in their footsteps.

Mu says of his motivation to make this film: “…everyone has already read a lot or seen a lot on TV about the disaster, the pain and the loss they experienced. So, everyone is already very familiar with the situation. So, through this group of people you can begin to appreciate the experience of an even broader group of people.”

Indeed, six years later that pain has hardly gone away — but the release of this film offers a chance to look back and reflect on what has happened since. The earthquake’s “aftershocks” rippled throughout China and not only raised a public conscience among Chinese citizens but also led to a broad reflection on China’s social institutions.

Despite not advancing to the final list of nominees announced yesterday, January 15, Mu has truly left his mark by being the first Chinese national to make it onto the short-list of nominees for the Best Documentary Short category.

To learn more about the 725 Salon Q&A with Mu Zijian watch the highlights video, above, or download the complete transcript below.

Video: Watch a trailer for One Child

Michael Laha used to work as a science researcher before heading to China to teach English. He is currently pursuing a Master's Degree in Chinese History at Columbia University.