Video: For Vir Das and Other South Asian Comics, the Best Punchline is Life Unfolding 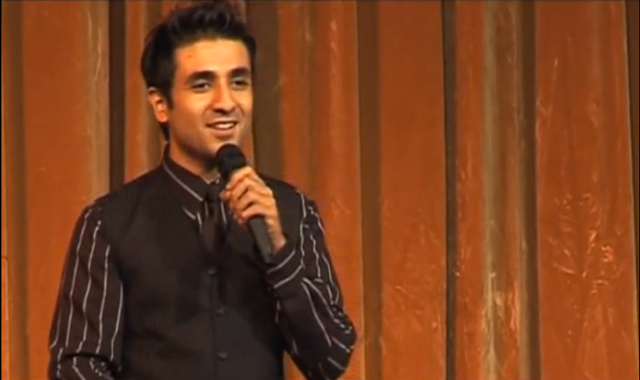 OK, fine. Silence is golden, and patience is a virtue, but let's be real: everyone knows laughter is the best medicine. A well-timed joke can change anyone's mood and make the most obscure subject matter engaging. How else do you think The Big Bang Theory has gotten away with Schrödinger's Cat, the Higgs Boson Particle, and all that science for six years? Whether on stage or on screen, comedy is not only an integral part of storytelling but also how many of us in the real world tell the stories of our lives.

Vir Das, a classically trained actor, comedian and musician, understands the need to inject comedy into how we make sense of what goes on in the world on a daily basis. The host of a Daily Show-esque program in India, News on the Loose, Das, like Jon Stewart, knows that if you want to help audiences understand the massive barrage of information thrown at them by the media, you better know, not what we want to hear, but how we want to hear it — usually with a healthy blend of expert wit and a "calls it like I sees it" attitude. Das headlines an Asia Society India Centre event next Tuesday, November 27 where he will discuss how comedy can help us make sense of, and come to terms with, our society.

Das is only one of many South Asian comedians, from Aziz Ansari to actors like The Big Bang Theory's Kunal Nayyar, who are making an impression in pop culture. Whether Ansari is talking about how much time he wasted surfing the internet, or comedian Russell Peters is reminding us of media stereotypes of Arabs, or Kumail Nanjiani is recognizing Karachi streets in a bonus level of Call of Duty: Black Ops, they all tell the stories we think about every day and say, "Thank goodness someone said it out loud!"

Das discusses a proposed one-year education increase for medical school in India with Junior Doctor Correspondent Sorabh Pant on News on the Loose:

Aziz Ansari on the vat of useless knowledge that is his brain because he just had to look up Joe Pesci on the internet. (Note: contains adult language.)

Kunal Nayyar as The Big Bang Theory's Raj Koothrapali, a brilliant scientist who has a physical inability to speak to women, until he meets — Siri.

Azhar Usman, on the Allah Made Me Funny Comedy Tour, talks about flying the "friendly" skies post-9/11.